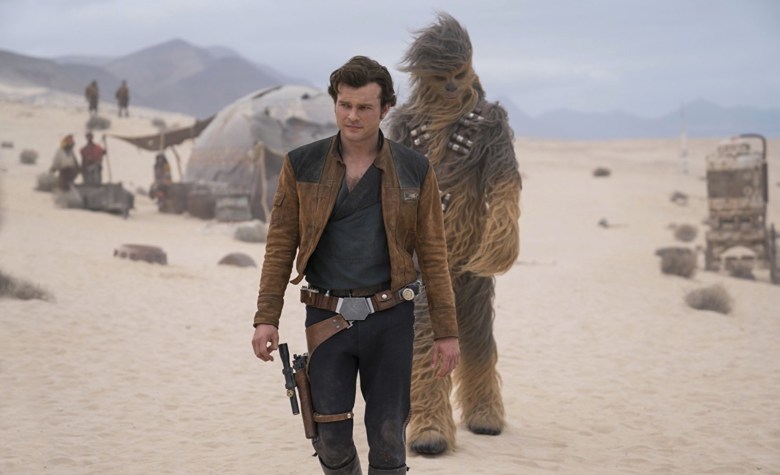 The thrill is gone. After more than four decades and nine releases, the “Star Wars” franchise has come a cropper with an $83 million opening-weekend estimate, with Memorial Day four-day figures likely to top $100 million. Granted, that’s a better take for the holiday than any release since 2014. But since when has “Star Wars” releases needed recent comparisons on the second-biggest release date in May in order to look good?

No one was expecting a challenge to all-time openings: “Solo: A Star Wars Story” falls outside the main franchise storyline and faces competition in a top-heavy blockbuster period. Still, the most pessimistic guess was $105 million for the four-day period, with $115 million considered a more likely low-end result.

We anticipated some reasons for the lower guesses. But this even-weaker total suggests that all the possible excuses came to pass — a troubled production history, mediocre early reaction, too much competition, too many Star Wars films in close proximity. And perhaps most of all, a not-entirely expected disinterest in the early days of Han Solo.

“Solo” managed no better than #14 on the all-time list of (adjusted, as are all numbers here) Memorial Day openings; for this century, it ranks only ninth. Among those that did better were “Pirates of the Caribbean: At World’s End,” “Fast and Furious 6,” “Bruce Almighty,” “The Hangover Part II,” and “The Day After Tomorrow.”

Among all-time openers it ranks #138, far below the six “Star Wars” films that opened since the franchise’s 1997 continuation of the initial trilogy. (The earlier films opened in vastly fewer theaters and screens.) Those titles ranked between #1 and #58 among all-time openers. Among the three Disney releases, the lowest was “Rogue One” (#22) at over $160 million, nearly double “Solo.”

“Solo” is no better than fourth among 2018 opening weekends, where the past three “Star Wars” films were the best of their entire years. It might not even make the top 10 for the year (tenth best for 2017 was “Logan,” at nearly $90 million).

The “Solo” production budget is unreported, but given the cost of previous films and extensive reshoots with Ron Howard after Lucasfilm fired original directors Phil Lord and Christopher Miller, a guess of at least $250 million seems reasonable. And that is before marketing, which for a worldwide event of this size would cost in excess of $150 million and more.

That’s a bottom-line cost of $400 million. It’s possible “Solo” will make only a little more worldwide.

The $83 million three-day total is unlike to see the elusive three-times multiple. Last year’s Memorial Day offering, “Pirates of the Caribbean: Dead Men Tell No Tales,” opened to $64.4 million and had a 2.75 multiple. However, its early signs were better: It dropped 14 percent in its second day. “Solo” fell 31 percent.

The “Star Wars” franchise bucks the trend of blockbusters seeing two-thirds or more in foreign results, and international results were even more tepid. With nearly 90 percent of the world open, the initial foreign take was only $63 million. China will open to a pathetic $10 million, which will be most of its run. So if domestic comes in at $225 million (a likely total), the worldwide total isn’t likely to be much over $400 million.

Anything below $257 million domestic would be less than “Avengers: Infinity War” made in its opening weekend. This is new and hostile territory for Disney, which must face the expense of this release, what it could indicate for diminishing interest going forward, and increased evidence that the “Star Wars” audience is disproportionately domestic.

It is also way below the $125 million grossed by “Deadpool 2” last weekend. That number gave a hint that, compared to other recent Marvel films and a lower take than its predecessor, that perhaps there were early signs of Marvel fatigue.

One explanation was heavier competition, which might also be a reason why “Deadpool 2” dropped 66 percent in its second weekend. Of course, “Deadpool 2” is a success; it cost about half of “Solo” and will see better results. But we’ll need to see its trajectory, as well as the performance of the next Marvel release, to see if overkill is a risk. For “Solo,” that seems clear already.

Meanwhile, “Infinity War” leads the longer-term holdovers with another $16.5 million in its sixth weekend. The 44 percent drop gets it to over $620 million. At this point, it projects to a final domestic total of somewhere between $650 million-$675 million, or below “Black Panther,” which will just about reach $700 million.

The presence of three expensive brand-name titles remains a good thing for theaters. The three-day weekend saw a big increase from last year, with the result that year to date is now up a very healthy eight percent above the same point last year. The standout among the rest of the wide releases is “The Book Club.” The comedy about an erotic-fiction book club comprised of AARP members dropped only 30 percent with its $9.45 milion total. If it sticks around for a few weeks, it could get to $50 million.

The rest of the list is latter weeks of variably successful titles, with the generally lean pickings allowing “RBG” to sneak back on to the Top 10 in only 415 theaters.

(all estimates are for three days)