Gilliam's famously troubled project is finally finished and closing out the Cannes Film Festival. It's far from perfect, but it might be his most personal movie. 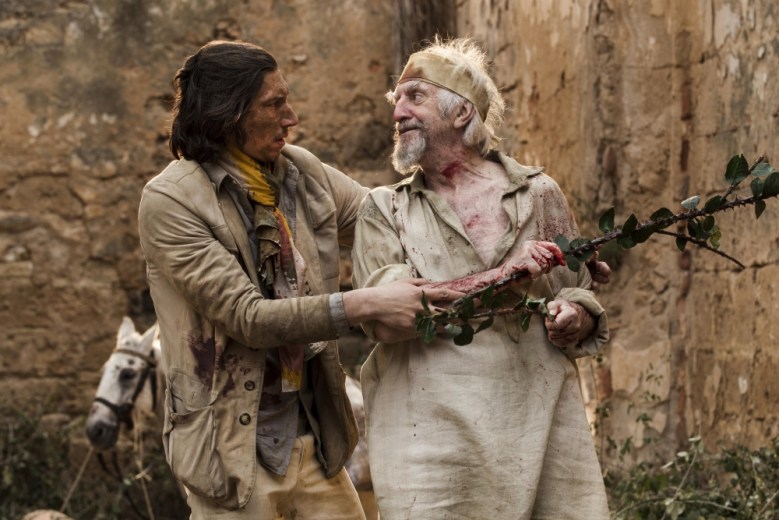 At this point, the very existence of “The Man Who Killed Don Quixote” is a triumph, and Terry Gilliam knows it. “After 25 years of waiting,” announces an opening credit for the director’s completed version of his Spain-set odyssey, which faced a pileup of production woes over the decades. “Finally … a Terry Gilliam film.” He could have rolled the rest of the credits right there and moved on.

As chronicled in the 2002 documentary “Lost in La Mancha,” Gilliam’s initial 2000 attempt to bring the project to fruition fell apart in several ways, from location shooting issues to injured star Jean Rouchefort dropping out, transforming the project into a catastrophe of mythic proportions. As it turns out, “The Man Who Killed Don Quixote” sits alongside much of Gilliam’s late period work as a messy but singular achievement that strains to make its disparate parts fit together, but there’s a noble spirit of invention to its wackiness anyway.

At the same time, this is a more personal work than anything in Gilliam’s oeuvre to date, an indictment of the capitalist forces exploiting storytellers and the self-involved creatives swept up in the madness. Aided by a loopy Jonathan Pryce in a role originally conceived for Jean Rochefort and Adam Driver as a subtler version of whatever Johnny Depp had in mind, the completed work takes on more personal ramifications that anything else in Gilliam’s filmography. It’s sloppy and amateurish in parts, but always reaching for something, often resulting in a fascinating half-formed beast working through a lot of baggage: a vanity project about the nature of vanity, centered around one of literature’s most famous examples, in the context of the most famous vanity projects of all time coming to fruition. The whole thing is very Gilliamesque.

The filmmaker’s contemporary riff on Miguel de Cervantes’ windmill-chasing lore finally exists, but it got a major update on the way to the green light: Gilliam’s original treatment contained an aspect of “A Connecticut Yankee in King Arthur’s Court,” with an advertising executive sent to a past where he encounters the fabled knight errant and his partner Sancho. Now, “Don Quixote” exists exclusively in the present day, with Driver as Toby, a power-hungry film director (hint, hint) currently in the process of making a bland adaptation of Cervantes’ original text.

As our story begins, Toby’s shooting a thinly-conceived windmill chase outdoor that ends poorly, which gives him his cue to curse out the crew and sashay off-set with an attractive young production assistant. It’s an impressive opener, bringing us deeper into lore of the project and suggesting a playful deconstruction of filmmaking pomposity in the vein of Robert Altman’s “The Player” with a Euro update for the age of co-productions.

Then the cynical framework winds into more earnest territory, with Toby taking a break from fooling around with the seductive wife of his unnamed studio boss (Stellan Skårsgard) to rewatch an old student film — called, of all things, “The Man Who Killed Don Quixote.” The black-and-white project found Toby running around Spain shooting a scrappy interpretation of the Don Quixote story, and in a flashback, Toby recalls finding an old shoeshiner named Javier (Pryce, superb) while traveling Europe with his crew to play the lead part. In due time, Toby’s guiding the feeble man through a Don Quixote acting workshop. These scenes unfold with some of the most engaging filmmaking Gilliam has given us in decades — playful, nostalgic moments that attest to the thrill of creating something on the fly — and it’s enough to send Toby on a soul-searching mission back to the small town, where he finds echoes of the old project waiting for him. “The Man Who Killed Don Quixote”

There’s a romantic subplot involving Angelica (Joana Ribeiro), the tough-minded woman whom Toby seduced as a teen, and her father the barkeep, similarly frozen in time and wandering the same dusty roads and empty vistas where Toby once discovered his calling. But more important, there’s Pryce, now a raving madman wearing battle armor — convinced he’s Don Quixote, and that Toby is his long-lost Sancho Panza. A few klutzy exchanges later, and he’s set his entire encampment aflame, assaulted some police officers, and dragged Toby along with him as the pair suddenly become the exact wayward adventurers that Pryce’s character believes them to be.

From there, “The Man Who Killed Don Quixote” lurches through a peculiar set of circumstances, with Toby battling to wake up his old star from the spell and the self-professed Quixote running amok. For a project that took so long to come together, it’s a wonder why the movie has such severe issues in its second act, lurching to a halt as the men argue through their delusions in the middle of nowhere. Padding out the two hour-plus running time, Pryce deepens his formidable performance, and Driver maintains his willingness to push his deadpan style to goofy extremes (he actually sings show tunes, which is as eerie as it sounds), but Gilliam fails to mine much substance from this kooky dilemma, and the rekindling of Toby’s romance with Angelica feels equally half-baked.

Fortunately, this is a Terry Gilliam movie, so some surreal outré treats await. When this trio finally arrives for a party at an ancient castle — how they get there doesn’t quite add up — they find it presided over by a Trumpian businessman (Sergi López) whom Toby’s boss is keen on impressing so they can score more cash for their project. But for the Don Quixote of the group, it’s a medieval setting for the final battle. It’s here that “Don Quixote” finds a fresh stride, with Nicola Percorini’s cinematography transforming the castle into a Grand Guignol showdown of gladiatorial battles, fiery eruptions and romantic declarations, with a woozy overtone that implies the whole scenario exists in someone’s mind — Toby’s, perhaps, or the man who invented him, as Javier confronts the tragic possibility that his valiant mindset comes across to everyone as one giant punchline. The assessment really resonates in a movie written by an ex-Monty Python guy.

Ultimately, “The Man Who Killed Don Quixote” falls short of crystalizing into a satisfying narrative whole, but it’s clear that Gilliam developed a genuine relationship to this material from his own creative yearning. The movie ends on a striking note of poignant wonder, somewhere between utter absurdity and sincere soul-searching, like so much of Gilliam’s work going back to the days of “Time Bandits” and “Brazil.” It may not reach those same levels of inspired lunacy, but it offers a more melancholic alternative, which makes plenty of sense in the context of a work that the director clearly had to finish regardless of the end result.

As Quixote and his Sancho ride off into the sunset (which is not the spoiler it may sound like), “The Man Who Kills Don Quixote” lands on a tantalizing possibility: No matter the completed movie that has finally arrive, some aspect of this drama will never end for the tortured artist, and on some level it never will.

“The Man Who Killed Don Quixote” premiered as the closing night selection of the 2018 Cannes Film Festival. It is currently seeking distribution outside of France and China.

This Article is related to: Film and tagged Cannes, Reviews, Terry Gilliam, The Man Who Killed Don Quixote