Plus, more details about the murderous mystery and setting for the USA Network series’ next installment. 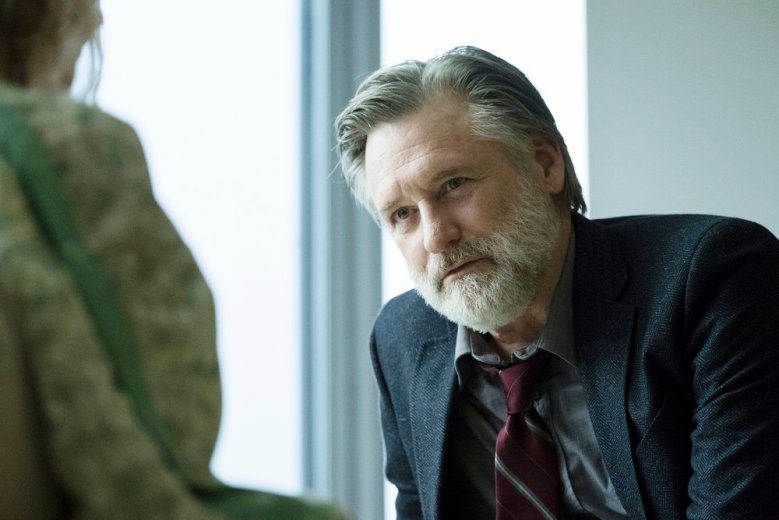 [Editor’s Note: The following contains spoilers from “The Sinner” Season 1, including the ending.]

After “The Sinner” cast its “formidable, mysterious woman” with Carrie Coon, the USA Network series didn’t have to look far when it needed to cast an older man for its next season. The actress’ husband, Tracy Letts – the Pulitzer Prize-winning playwright, screenwriter, and Tony-winning actor – has joined the cast, opposite Bill Pullman, in Season 2.

Created by Derek Simonds and based on German author Petra Hammesfahr’s book of the same name, Season 1 of “The Sinner” revolved around Det. Harry Ambrose (Pullman) helping Cora Tannetti (Jessica Biel) uncover nearly unimaginable past traumas, which helped reduce her 30-year prison sentence for murder to second-degree manslaughter. In the second season, Ambrose travels to his hometown in rural New York to investigate the case of an 11-year-old boy who claims to have killed his parents but has no motive.

Read More: ‘The Sinner’: The 13 Craziest and Depraved Differences Between the Book and USA’s Disturbing Series

According to USA Network, “He’s pitted against those who’ll stop at nothing to protect its secrets – and a mysterious woman who proves to be a complicated, enigmatic piece to this haunting puzzle.” In addition, “The Leftovers” and “Fargo” star Coon, whose casting was announced earlier this month, will play a character named Vera, who is described as “a formidable, mysterious woman who struggles between upholding the ideals of the community she leads and fulfilling her own desires.” Could these women be one and the same? At an Emmy For Your Consideration event for the first season of “The Sinner” on Thursday night, Biel and Pullman sat down with Variety’s Jenelle Riley to discuss the show. After screening the pilot, the panel revealed a couple of first-look photos from the set of the second season, which is currently shooting.

“This is probably… the first or second day of shooting. That’s [director Antonio Campos], obviously,” Biel said while regarding the first photo (above). Although Biel does not return on screen for Season 2,  she’s still a producer for the series and actively involved in the process of making the show.

“The location is The Cobblestone, the pub [run by] the character Jack, who is an old friend of Ambrose,” she said. “You’ll start to unravel the big story between the two of them, a lot of history because they’re from the same place. And Jack is intertwined with the other female characters.”

Pullman, who often spoke of his character Ambrose in the first person during the FYC event, gave a few more details about Jack.

“[Jack,] this guy played by Tracy Letts, we’re friends when we were in high school. Then I was the guy who left the little town, and he stayed and he took over his father’s restaurant called The Cobblestone,” said Pullman.

“I’ve come back to help his daughter who is now a detective on the local police department just starting out. And this terrible incident has happened where a child has been discovered in a hotel room, parents are dead, the child admits to having killed them,” he added. “The shock of that, the trauma of that, begins to ripen through the whole community. You realize the layers and layers of dissembling and protectiveness and everything. So this is, and Ambrose is trying to stay on the rails for a little bit. He’s gone through this experience with her [Cora Tannetti] and he’s cleaned up his act a little bit. Trying hard.” Pullman added, “There’s a woman also who arrives on the scene played by Carrie Coon, who is Tracy’s wife in [real] life. So it’s really interesting to have the two of them on set. They’re both great theater actors. I know them from the theater.”

Biel said, “This season as well will sort of peel the onion of Ambrose even more to really get to the bottom of his psychology, at least a little bit more.”

After revealing so much, Pullman didn’t have more to say about the second photo (below), which only features his character standing in front of the camera. When Riley noted that he looks serious in the photo, he added, “Yeah, looking like, ‘Where is the director? This guy is carrying a heavy camera. I can’t stay here for very long.’” Although Biel said her character does not appear in the second season, she didn’t reject the idea that there was still more to tell in Cora’s story.

“We did talk a lot about does Cora come back for Season 2 and what is the relationship because that’s what was interesting to me,” she said. “What happens when a woman goes through that? What is life like after that when the only person really in her life that she can connect with, even besides her husband, is the detective who got her out of this thing? But we just couldn’t do it this particular season.”

The first installment of “The Sinner” was the No. 1 new cable series of 2017 and earned two Golden Globe nominations and two Critics’ Choice nominations. Season 2 will return sometime in August.

This Article is related to: Awards and tagged The Sinner, Tracy Letts, USA Network