After "One Mississippi," Notaro's new Netflix special "Happy to Be Here" is the next step in bringing her life into her work. 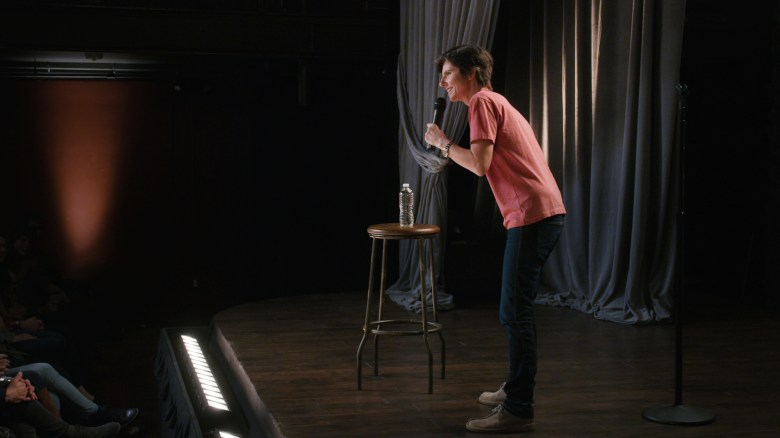 “Tig Notaro: Happy to Be Here”

It’s hard to write a good punchline. Whether you’re a comedian who leans more toward one-liners or stories, finding the perfect capper is the trickiest part. But there’s something about the way that Tig Notaro approaches her standup that brings the audience in and lets them luxuriate in that punchline along with her.

Notaro’s new Netflix special “Happy to Be Here” features a lengthy deconstruction of a misunderstood phrase, centering on how things change after a new baby. With each new angle, it only gets funnier the longer Notaro breaks it down for people who interpret it in different ways.

“It’s almost like I’m, in some way, breaking a major rule of comedy — it’s explaining the joke. Not really explaining the joke, but I’m taking it apart and analyzing it and definitely walking through it with the audience,” Notaro told IndieWire. “In stand up, even if you’ve said something a million times, you have to deliver it like it’s for the first time.”

But for Notaro, it’s not just about challenging audiences’ expectations about how to craft and deliver a joke. It’s about continuing a sense of authenticity to self that’s woven through much of her on-screen career.

“Generally across the board, what I’m trying to do differently is to really just always stay in tune and in touch with what I want to do,” Notaro said. “I’m open to feedback or criticism, but there were plenty of people that told me I shouldn’t take my shirt off when I was doing standup. That wasn’t right and I could have gotten scared by that. I have very close, talented, funny friends that told me I shouldn’t talk about cancer on stage, that if I share such personal things and it bums the audience out, it would potentially bum me out on a level I’m maybe not prepared for. And people have told me, don’t talk about sexual assault in my TV series. And I’m so glad that I did not listen to that.”

Part of following that instinct is incorporating the natural comedy of day-to-day life into her material. As with that misheard baby phrase, much of what sets “Happy to Be Here” apart revolves around Notaro’s family, namely her wife Stephanie Allynne and her two young twin boys.

“I essentially felt like I had three people writing for me between Stephanie and the babies,” Notaro said. “I do all of my writing on stage. A lot of my performances are improvisational, but I also have material that I’m working on that I’ll elaborate on. This special has more of the tried-and-true material to it, because I have plenty about Stephanie and the cat and the babies and everything in my life. But I think those bits are the ones that hit the hardest.” Notaro and Allynne worked closely together on the series “One Mississippi” and are co-writers on the upcoming Netflix film “First Ladies,” in which Notaro will co-star alongside Jennifer Aniston. That work-life partnership is built on a mutual understanding that bringing in personal experiences is often helpful, and that there’s a shared understanding of what each is bringing.

“When Stephanie and I worked on our show, we were very open and the stories and experiences are pretty freely used from our life. But there were some situations or experiences where we decided to withhold for whatever reason,” Notaro said. “We both had very different reasons or feelings about stories or experiences that we shared. If one felt strongly about something, the other would of course just go with that. No show or episode or joke is too important to include if your spouse or a child is uncomfortable with it.”

Between the end of production on the final season of “One Mississippi” and the show’s cancellation in January, Notaro took the opportunity to work on a few other projects, including a delightful segment for Sarah Silverman’s Hulu show “I Love You, America.” Stepping into a world that seems counter to her usual performance style, Notaro took lessons on how to be an auctioneer.

“I loved making the two seasons of ‘One Mississippi,’ but once it ended, there was a part of me that was like, ‘I’m fine with that ending. I’m fine with moving on and doing other things,'” Notaro said. “What’s been such a joy — and I really mean this — I’ve really enjoyed making appearances on friends’ shows or movies and people that I really respect. Somebody like Sarah asking me to do that segment — I pitched the idea of me learning to auction and she loved it. Then I knew I could put that in her hands to make sure it was executed the right way.”

Now that “Happy to Be Here” is out in the world, “First Ladies” is far from the only thing on the horizon. Notaro explained that she’s already working on her next special, which she says will be “completely different from anything.” If all that weren’t enough, Notaro will also appear on the upcoming season of “Star Trek: Discovery.”

“In guest starring on Season 2 of Star Trek, I’m in the hands of Alex Kurtzman, who I’ve known for a couple of decades, and he knows my voice really well,” Notaro said. “My character, I’m telling you, the writing that was done for my character is just spectacular. I followed ‘Star Trek’ as a child and had the action figures. The whole thing is just ridiculously fun and exciting.”

In addition to “Star Trek,” Notaro is also set to appear in the Rose Byrne-led comedy “Instant Family,” due in theaters early next year. All these combined projects are a validation of that list of things she insisted on doing, despite others telling her not to.

“I think all of those experiences have taught me that I really need to trust myself and I really need to stay on this path of just listening to my gut,” Notaro said. “All of those risks that I’ve taken have paid off in a way where I feel happy and proud and excited to express myself in these next and new ways.”

“Tig Notaro: Happy to Be Here” is now available to stream on Netflix.

This Article is related to: Television and tagged Netflix, One Mississippi, Tig Notaro