Fey also discusses why her Charlottesville "sheet-caking" bit on "SNL" didn't work, and how she'd fix it today. 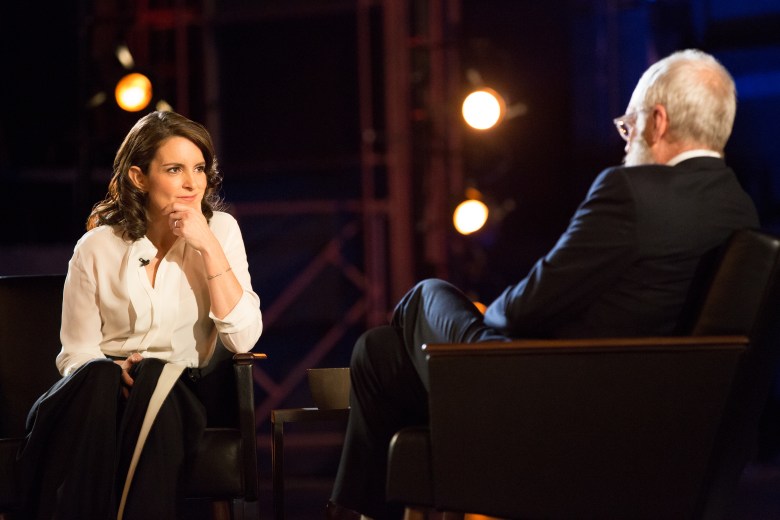 David Letterman’s new Netflix series, “My Next Guest Needs No Introduction,” has proven to be a format well-suited to bringing out candid self-reflection in his long-form interview subjects — which came to the forefront in his latest sit-down with Tina Fey.

In between a trip to Chicago for music and local cuisine, Fey and Letterman had a revelatory conversation about her family life and her love of comedy — including Letterman himself introducing the topic of women in comedy.

However, he opened by acknowledging the fact that for years, former “Late Night” writer Nell Scovell and many others have criticized the lack of women in his writers’ rooms. “[People would ask] why don’t you have women writers? And the best I could come up with was ‘I don’t know.’ I didn’t know why there weren’t women writers. There was no policy against women writers. I always thought, ‘Well, geez, if I was a woman I’m not sure if I would want to write on my nickel-and-dime, dog-and-pony show anyway because we’re on at 12:30.”

“Yeah, well, we do want to write on it, though,” Fey immediately said (to cheers and applause).

“That is my ignorance, and I feel bad for that,” Letterman replied. (For the record, Friday morning Scovell noted on Twitter that all of the executive producers on “My Next Guest Needs No Introduction” are men.)

Fey and Letterman then went on to discuss the ways in which things are changing in terms of diversity, specifically in the context of “Saturday Night Live.” But Fey admitted that since leaving the show, every time she participates in an “SNL” Weekend Update desk bit, “I always step in manure.” Fey and Letterman then discussed her Weekend Update response to the Charlottesville protests of 2017, a bit in which she advocated eating a sheet cake rather than respond to white nationalists, which Letterman referred to as “perfect.”

“Turns out it was not, sir,” was her wry response, explaining that “I felt like a gymnast who did a really solid routine and on the ending broke her ankle.”

Her belief was that the flaw was in “the last two or three sentences of the piece… because the implication was that I was telling people to give up and to not be active. That was not my intention, obviously… If I had a time machine, I would end the piece by saying… ‘Fight them in every way except the way that they want.'”

Of course, that far superior line wasn’t a part of the sketch. “I wrote it two days later as I was pacing in my house. That’s the nature of ‘SNL.'”

That said, Fey did not say she was sorry for the bit, noting that “the culture of apology is not for me.” Instead, she believes that “You just have to be an athlete about it… go out next time and try again.”

The full episode contains much more of Fey’s thoughts on comedy, the development process of the “Mean Girls” stage musical, and her favorite Chicago foods. For the record, Fey’s dream “SNL” cast, drawn from across the decades: Maya Rudolph, Bill Murray, Amy Poehler, Gilda Radner, Jan Hooks, and (“because,” she said “I guess we’ve got to get some [more] men in here,”) Will Ferrell, Phil Hartman, and Eddie Murphy.

“My Next Guest Needs No Introduction With David Letterman” is streaming now on Netflix.

This Article is related to: Television and tagged David Letterman, My Next Guest Needs No Introduction, Tina Fey