The action star said working with Mirren was one of the most validating moments in his career. He also started her Instagram account. 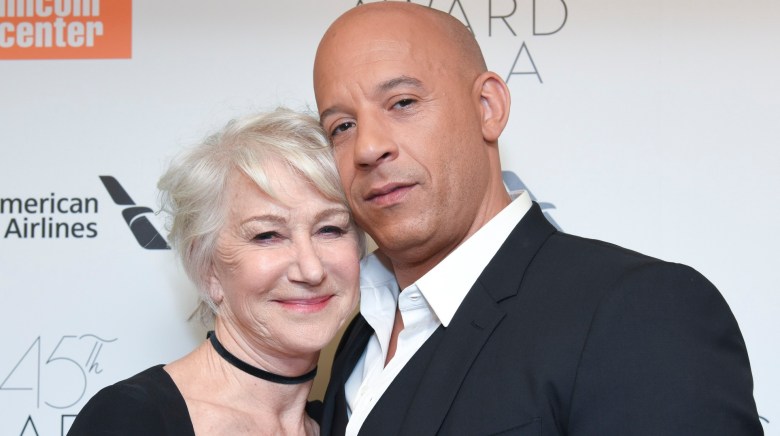 Vin Diesel and Helen Mirren at the Chaplin Award Gala

Vin Diesel was visibly moved while honoring his “The Fate of the Furious” co-star Dame Helen Mirren, calling his work with the Oscar winner one of the most validating experiences of his career. “The whole experience was magical for me. The experience of working with her was so magical, and so validating for me,” he said.

Diesel was one of a handful of presenters at Film Society of Lincoln Center’s 45th Chaplin Award Gala, which is named for Charlie Chaplin and honors titans of film acting and directing. Diesel began remarking that he remembered breakdancing in Columbus Circle as a teenager, just a few blocks away from Alice Tully Hall where the ceremony took place.

“I remember this being one of my favorite days in my journey,” said Diesel of his scene with Mirren. “No one else in the room mattered. Nothing existed but this bond between her and I, and there was something really magical and really special about it. And it’s something that I’ll take with me for the rest of my life… It’s probably her which is why ‘The Fate of the Furious’ was the fastest movie in history to hit a billion dollars.”

(According to Wikipedia, “Star Wars: The Force Awakens” was the fastest movie in history to reach $1 billion, with “Furious 7” and “The Fate of the Furious” in third and fourth place, respectively).

Funnily enough, it was Mirren who approached Diesel about appearing in the action franchise. Diesel recalled meeting the actress at a Golden Globes party where he said she told him, “Get your act together! I’ve been wanting to be in ‘Fast and Furious’ forever! You’re the producer, make it happen!”

“Now, she’s very intimidating, despite her 5’2″ frame,” said Diesel. “For a tough New Yorker like myself, I was intimidated. And I don’t get intimidated easily.”

Diesel joked that he and “The Fate of the Furious” team started her Instagram account, before concluding with more sober remarks. “She brought that magic, and she saw the magic in me, and she made me feel like the luckiest kid in the world.”

This Article is related to: Film and tagged Helen Mirren, The Fate of The Furious, Vin Diesel