The prolific filmmaker broke the rules and invented a new language to tell a story that tests the boundaries of what is a documentary. 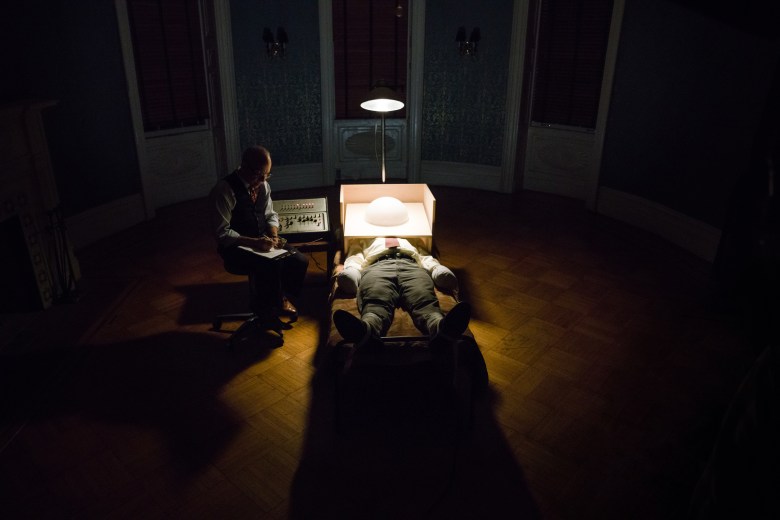 Errol Morris’ “Wormwood,” a six-part nonfiction series for Netflix, investigates what really happened to Frank Olson, a biological warfare scientist working for the CIA who supposedly jumped out the window of a New York hotel (room 1018A) in 1953. It’s a mystery that spans 60 years of history of the CIA and is often told through personal lens of his son Eric Olsen who, now in his early seventies, is still determined to discover the truth of his father’s death.

“This is not, in any sense, a live action, vérité account of something that is transpiring in front of the camera,” Morris said in an interview with IndieWire. “The camera is trying to bore into the past, into history, is trying to discover what did happen using all of the tools that we have at our disposal.”

Those tools involve a rich archive of documentation, both personal and governmental, but also the tools of cinema, as Morris creates a bold, groundbreaking use of form that has rankled those who have a traditional view of what qualifies as a documentary.

The Colby Documents as Drama In 1975, the Rockefeller Commission, investigating the CIA, revealed that Frank Olsen had been given LSD, which was supposedly the explanation for his jumping out the window. Eric Olson and his family were brought to Washington to meet President Ford and shown what was known as the Colby Documents – hundreds of pages of first-person accounts, summaries, and other documentation from 1953-4 that detail the last ten days of Olson’s life. It was presented to the family as everything the government had on Frank’s death.

“[The Colby documents] are really compelling in their own way, but clearly they’re inconsistent,” said Morris. “You read them and you sit and think about them and you start to think, ‘Well, why were these written? Were they edited, were they amended, were they created by the CIA as part of a disinformation campaign to create a false and misleading story about what happened to Frank Olson?’ So there you go. You have at the center of the story, a story which is in itself shrouded in mystery.”

From that mystery, Morris got the idea to dramatize the Colby Documents, using known actors like Peter Sarsgaard and Molly Parker, who play Frank and his wife Alice. These are not re-enactments like Morris used in “The Thin Blue Line” – a “Rashomon”-like story in which the truth lies between the intersection of differing points-of-views. In “Wormwood,” the scenes and dialogue are taken from the Colby Documents, but the use of cinematic techniques – normally used in scripted narrative filmmaking –  present a specific perspective on what happened.

“It’s a dramatization of something that might be untrue, as a way of thinking about it, of looking at it, of scrutinizing it, of bringing it to life,” said Morris. “With some notable exceptions, I would say they are dramatizations of what Eric and I think [happened] – namely that his father was executed by the CIA, and I provide two scenarios [forced suicide and execution]. Which is it? I don’t know, but I do believe he was, for all intents and purposes, killed by the CIA.”

Morris shot these scenes for 20 days and had 40-50 more script pages he wished he had the additional time and resources to film. The cinematography (by Igor Martinovic) is very expressive, often utilizing sillhouettes and compositions that give the viewer a sense that there is something sinister happening underneath characters’ conversations and building a sense of paranoia. The actors’ performances and subjective uses of the camera establish the feeling that Frank is being lured and trapped into situations where he can’t trust his co-workers, while also establishing Alice’s point-of-view as she sees changes in Frank’s behavior.

Much of “Wormwood” is driven by Eric, who is still emotionally invested and defined by events that happened when he was a small child. While the 71-year-old is a compelling interview subject, the feeling of the personal is a brush Morris also wanted to use in cinematically painting the story that exhumes, literally, the corpse of Frank.

“One proof of Frank Olson’s devotion to his children and to his wife is the amount of photographic material that he produced, these home movies, which are extraordinarily beautiful,” said Morris. “Fortunately, Eric had preserved all of this material. We had the negative. We had it re-transferred at 5K, and it’s incredibly great. You make various decisions, stylistic decisions, to preserve it as film, as old film, seeing the sprocket holes.”

The 8mm home movies are not simply B-roll to cut away to during an interview. In editing together the different types of material, Morris took what he calls a “collage” approach. His goal was to build off what he did in “Fast, Cheap and Out of Control” and put different types of media together in unexpected ways. For example, in one scene in which the CIA visits Alice (Parker), the recent widow blinks. As her eyes close, Morris cuts to Frank’s actual home movies as if they are flashing through her mind.

Morris also experimented with collage within a single frame. Liberated from the confines of the set aspect ratio needed for his theatrical releases, Morris’ series could play different types of footage at the same time.

“Here you’re afforded yet a whole new set of opportunities because of Netflix, and this is because of the new ways in which media is delivered,” said Morris. “There’s a kind of flexibility that was unimaginable even 10 years ago. So for example, this discussion am I shooting 2.40, or am I shooting 16 x 9, am I shooting 1.33, what is the aspect ratio? Well, there is no fixed aspect ratio anymore. It could be whatever you want it to be. You can letterbox it, you can blow it up, you can have multiple images within one frame, you can do things that would have been impossible – or very, very difficult – if this was being delivered on a film print.”

In making the film, Morris was obviously compelled by Eric and his story. He wanted to find a way to shoot and edit his interviews that cinematically drew the audience into Eric’s narration, just as Morris was as he listened to him during tens of hours of interviews.

“Cinematic language comes out of the content and I think that’s also true with shooting interviews in a different way,” said Morris. “Seamlessly a story is emerging in ‘Wormwood,’ a narrated story, and I was looking for a means that you sink into this interview.”

Morris found an abandoned warehouse space in Lynn, Massachusetts with a large window that gave him a stage he could use to reflect Eric’s different emotional and mental states. He then decided to use 10 different cameras at the same time, often moving three of the cameras as the story progressed and finding new angles based on what Eric was saying. The various angles allowed Morris to create a dramatic tension and emphasize different emotional beats in editing.

“In interviews, I very much like breaking the line, as a way of dramatizing a scene,” said Morris. “In ‘The Thin Blue Line,’ for example, shooting of the police officer, I am constantly breaking the line as a way of creating tension and drama. Here we’re using all kinds of tricks — mirrors, reflections, false walls, et cetera, — in order to create diverse camera positions.”

The problem is, when you have 10 camera photographing the same subject, while breaking the the 180-degree rule, it is very difficult to avoid the cameras filming each other. Further complicating matters is that it becomes very difficult to light the scene – especially with the changing dramatic lighting schemes and shifting camera positions – because the lights will end up in frame. For this near-impossible problem, Morris relied on veteran cinematographer Ellen Kuras. “Ellen was fearless in just stepping in, even in the midst of an interview and moving a camera,” said Morris. “She has an engineering background, and it shows here, aside from being really a great director of photography. She also has a real kind of engineering sense of camera placement, which was invaluable in this particular kind of shooting.”

“Probably it’s not the politically correct thing to say — that a lot of documentaries are perfunctory documentaries, they follow a certain set of familiar rules about style and presentation,” said Morris. “Often, breaking those rules leads to certain kinds of punishments.”

Morris knows there is discussion of how to categorize his film for awards, having been shut out of Oscar consideration and now facing the “is it a documentary” question for potential Emmy nominations. He is also convinced that he is doing things with the camera and editing that have never been done before in telling a nonfiction story.

“There’s the problem, for the purposes of awards, what category does it fall into? What species of film are we looking at here, and the fear, the fear which I certainly share, that it will be overlooked simply because it’s not clear,” said Morris. “But there’s a whole other side of issues, independent of that, and that’s the style of ‘Wormwood,’ or what I was trying to achieve with ‘Wormwood,’ which is really independent. I am not really thinking about awards, per se, although, as much as the next guy, I like receiving them.”

This Article is related to: Awards and tagged Ellen Kuras, Errol Morris, Toolkit, Top of the Line, Wormwood