The television host talks about how movies influence every aspect of his show and how Argento has inspired his latest stage of life. 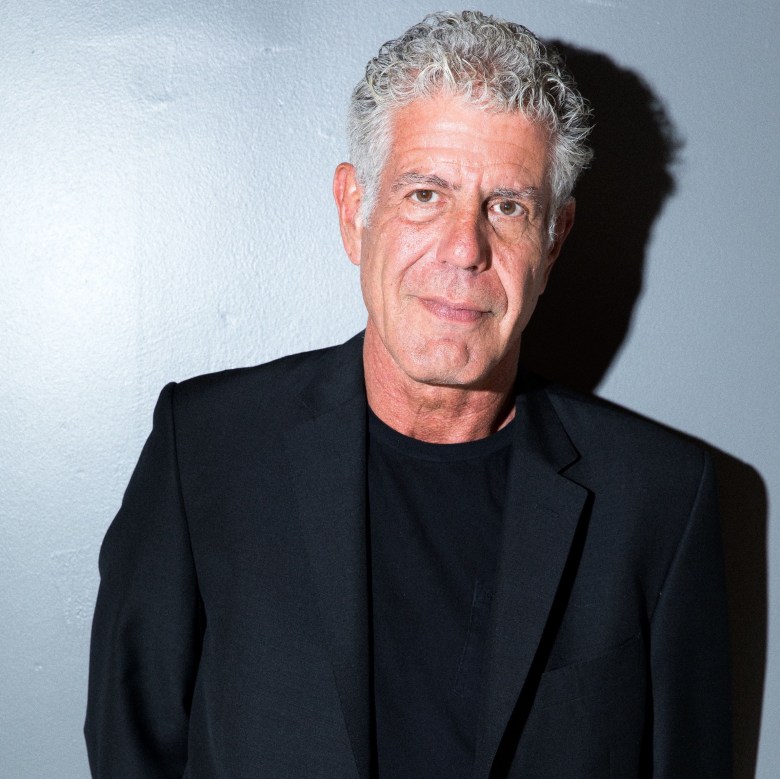 This has been Bourdain’s own ethos as he has settled into his groove. “I’m there to listen,” he said, reflecting on a scene in the episode where an African man notes over one meal that he has been stuck in Hong Kong ever since the Trump Administration’s travel ban has prevented him from traveling to the U.S. “I don’t go in asking hard-news questions, but incredibly enough, again and again, just by sitting down with people over food and giving them a platform where I can listen to them, they say extraordinary things that can be very political in their implications.” He pointed to an episode last year, set in Laos, where he dines with the victim of American attacks during the Vietnam war. “It’s obscene to sit there enjoying a platter of half chicken when somebody in the room with you has been injured by landmines or American explosives,” he said.

Though he’s an outspoken critic of many issues in his public life, Bourdain has tip-toed around politics for much of his show, with the exception of the current season opener in West Virginia. “I went into West Virginia with a political agenda in the sense that I wanted to go in and just let people speak for themselves,” he said, referring to the Trump supporters in the program. “I wanted to give them a break in spite of any preconceptions I might have had.” However, while he shared a beer with Barack Obama last season in Hanoi, Bourdain sees no potential to bring the current president onto his program. “I talked to President Obama as a father, as a parent, as a famous guy, who deals with that, being looked at — in his case, guarded at a restaurant, unable to go out for a beer,” Bourdain said. “I asked him very general questions to which he gave thoughtful, honest, reflective and entertaining answers. I can’t honestly say there’s any reason to expect that kind of experience with our current president, who seems to have few interests beyond himself. That’s not interesting dinner company.”

Bourdain has explored dozens of countries through the four iterations of his show, but a few continue to elude him: Venezuela (“We just can’t get an insurance company to cover us”), Afghanistan (“We keep trying”), Yemen (“The security situation is impossible”), and Somalia. “They’re all beautiful countries with incredible stories other than conflict, terrorism and war,” he said. As for North Korea: “I think under current circumstances it would be in really poor taste to do that,” he said. “I mean, the people are starving. I do a food-based show, ostensibly. If you see the hard news coverage, you’re so limited in what you’re allowed to see. They create a comfortable bubble for you at best; they clear everything. We look for natural, authentic experience and that would be impossible for us in North Korea.”

Bourdain said he spends more time in between shoots talking about movies with his crew. He cited a flurry of directors — Antonioni, Truffaut, Kurosawa, Fellini, Godard and Cassavetes — that he expected anyone working with him to know well. “I can’t really even start a conversation unless you’re already familiar with those guys,” he said, adding that he also likes “great, trashy drive films from the ’70s,” particularly the ones directed by Peter Yates. “There’s a baseline: Do you really like films? It’s a requirement,” he said. “With some directors, if you don’t know them, it’s weird.”

Bourdain was raised in New Jersey in the ’60s and ’70s, when his father worked at a camera store in New York that had rentable a 16mm projector. “I grew up with really great films being shown in my house on weekends for family and a few friends,” he said. “I’d probably seen the entire Janus Films collection by the time I was 12. My parents were the sort of people who went to theaters to see Bergman and Antonioni. Filmmakers were respected in my house from the beginning.” He delights in fusing his cinephilia with the design of the show: Anticipating the latest installment, his Buenos Aires episode is an explicit homage to Wong’s “Happy Together,” while the editing style of the Paraguay episode was inspired by Steven Soderbergh’s “The Limey.”

He also lists directors who are more obscure to Western audiences, such as Kinji Fukasaku and Shinya Tsukamoto, as key influences. “That’s fun part of making the show — getting to make small, cheap versions or homages to things that we love,” he said.

Bourdain lives much of his life in transit, and watches a lot of movies when he’s on the move. He rarely gets a chance to see new releases, though he did catch “Black Panther” during a stop in Nairobi. “It was a religious experience,” he said. He tends to work through entire directors’ filmographies. Recently, he said, he had been on a Bertolucci kick, until Argento insisted they focus on Pasolini. “When we’re not shooting, we sit around talking about movies,” he said. Bourdain’s relationship with Argento has overlapped with a dramatic chapter in her life, as the revelations about Weinstein’s behavior included her own disclosures in Ronan Farrow’s Pulitzer-winning story for the New Yorker. Argento endured traumatizing backlash from the media in her native Italy, and she fled the country as a result; she has been flinging a mixture of invective and messages of empowerment from her Twitter feed for months. “It’s been a huge part of our life,” Bourdain said. “As you can probably imagine, it’s been very hard and continues to be very hard for Asia, but at the same time, it’s inspiring. She’s at the center of a conversation with a lot of women who want to share. That’s something she takes really, really seriously.”

Case in point: When Argento came to the Cannes Film Festival to present the best actress prize, she took the opportunity to call out the hypocrisy in the room. “In 1997, I was raped by Harvey Weinstein here at Cannes,” she said. “This festival was his hunting ground … He will live in disgrace, shunned by a film community that once embraced him and covered up his crimes. And even tonight, sitting among you, there are those who still have to be held accountable for their conduct against women for behavior that does not belong in this industry.” (Argento later tweeted that only Spike Lee congratulated her for her remarks.)

Reflecting on the moment, Bourdain beamed. “From the second she said she’d been invited to present an award, I knew it would be a nuclear bomb,” he said. “I was so proud of her. It was absolutely fearless to walk right into the lion’s den and say what she said, the way she said it. It was an incredibly powerful moment, I thought. I am honored to know someone who has the strength and fearlessness to do something like that.”

It doesn’t take much to assert that Bourdain and Argento form a natural symbiosis: both radiate the aura of weathered cultural warriors, navigating a landscape that doesn’t always know quite where to place them, even as it continues to respond to their moves. Considering the potential for this power couple leads one to the natural conclusion that the world needs less Kimye and more Bargento. “She listens to my advice and frequently if not most of the time, rejects it,” said Bourdain, who released a throaty laugh that almost sounded like the tough guy might be welling up. “That is something that Asia cannot help but do,” he said. “She is brutally honest about herself and anything, and it’s a great quality.”

This Article is related to: Film and tagged Anthony Bourdain, Asia Argento, Interviews, No Reservations