At the climax of Season 9, "Mother" interrupts the course of our journey to reboot Archer's subconscious — and kick off a sci-fi themed season. 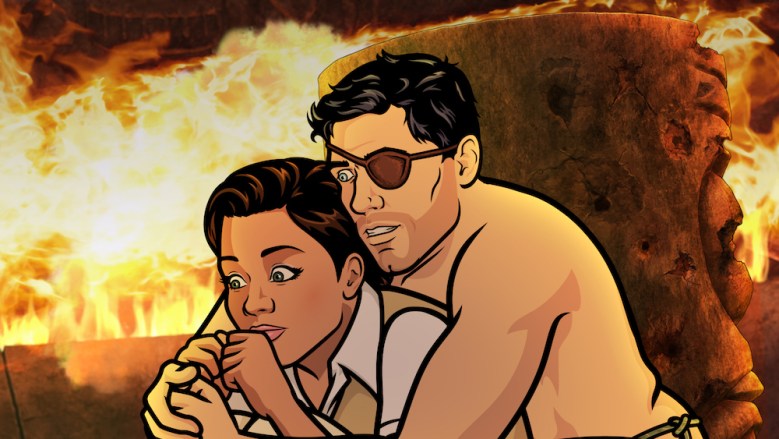 No, the Season 9 finale didn’t shift its story back to the present, where Sterling Archer is still stuck in a coma, but it did provide a surprisingly weighty ending to an otherwise lighthearted season. As the quest for a precious idol reached its end, so did Archer; the hero of “Danger Island” gave his life to save Pam, Lana, and the rest of the crew.

Yup, he died — fulfilling an unspoken promise made by creator Adam Reed when he turned Archer’s (im)mortality into an ongoing theme of the series. Viewers even got a brief glimpse of his body being overtaken by flaming lava before the picture cut to black, and a new story began — one we can expect to continue in Season 10. But more on that in a second. Over eight all-too-brief episodes, “Archer: Danger Island” managed to fulfill two of the series’ prime objectives: For the majority, “Archer” was fun, festive, and flippant. The lush visuals and imaginative arcs gelled nicely with the referential humor and barbarous jokes. Much like “Dreamland” was an exploration of darkness through a noir lens, “Danger Island” proved to be a lighthearted journey told as an old school action-adventure…

…except for that ending. Even though it’s an impermanent death, Archer still died; when Indiana Jones stole the idol in “Temple of Doom,” he wasn’t squished by the boulder. From the looks of things, the story arcs in “Danger Island” — Archer Airlines, Pam and Archer’s partnership (romantically and otherwise), and yes, Archer’s misguided mission to sleep with Princess Lanaluakalani — all get wrapped up with Archer biting the big one. This was one adventure he didn’t win, even if he was chuckling up until the end.

So what’s next? From the looks of things, Season 10 appears to be an “Alien” homage. After the fade to black, brief images of a spaceship flash across the screen. A long hallway not unlike this one is shown in a slow pan, followed by a blue-lit laboratory similar to this, a bay door with jumpsuits hanging in the wall reminiscent of this or even this (from “Aliens”), a shot of computers that looks like if “Prometheus” was made in 1979 (shout-out to Captain Idris Elba), and finally an empty chair facing a screen that boots up with the message “M/U Seamus” — a reference to both Archer’s first-born son (which turned out not to be his) and the Nostromo computer’s O.S., “Mother,” in “Alien.” But wait, there’s more! The M/U Seamus wakes up Archer, who’s sleeping alongside Kane, L., Figgis C., Tunt C., Gillette R., and Poovey, P. in sleeping pods that look a lot like these. When Archer pops up, a glowing purple orb floats over to him and he says, “Good morning… mother!” “Shut up,” she/it says back. That’s the end of the episode, though one could also argue Cyril/Fuchs’ armored suit in “Danger Island” was a bit of foreshadowing for Season 10, considering how closely it resembles Ripley’s exo-suit.

According to the most recent reports, “Archer” isn’t definitively ending in Season 10, so there’s no real reason for Reed to get back to Sterling’s “real life.” These last two seasons have been inventive and exciting, swapping out tones as well as color palettes. They’re tied together by the audience’s core relationship with the characters, and viewers should feel the creative spirit enlivening the series with each fresh foray into the unknown. Even those eager to see what happens to Archer in the end, whenever that comes, should be more than willing to put that revelation on hold in exchange for “Aliens vs. Archer.” (For what it’s worth, 20th Century Fox holds the rights to the “Aliens” franchise, which is owned by the same conglomerate that owns FX Networks — 21st Century Fox.)

As long as Reed is feeling invigorated by these new stories, keep ’em coming. Change always invites haters, but in space, no one can hear you scream.

“Archer: Danger Island” (Season 9) is streaming now on FX Now. The animated comedy has been renewed for Season 10.