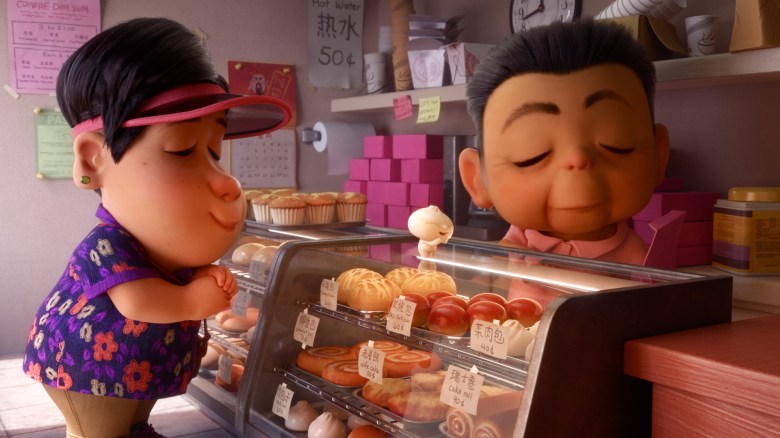 In recent years, more and more female animation interns have been hired by Pixar. However, with “Bao,” a delicious Chinese dumpling fable that will play in front of “Incredibles 2,” Chinese-Canadian story artist Domee Shi (“Incredibles 2,” Toy Story 4,” “Inside Out”) became the first woman to direct a short in Pixar history.

It’s a quirky and gorgeous-looking slice-of-life short (reminiscent of the late Isao Takahata’s  “My Neighbors the Yamadas”), in which a childless Chinese-Canadian woman makes a dumpling that magically comes to life as a cute and cuddly boy. But her over-possessiveness leads to heartbreak and the studio’s first WTF moment, followed by an emotionally-charged twist ending.

“I was afraid that it would be too dark and too weird of a story to tell at Pixar,” Shi said, “but I pitched it to Pete Docter [‘Inside Out’] and he became a champion. He said it was cool and different and encouraged me to keep the twist ending.”

That’s what got “Bao” greenlit at Pixar. “It’s specific and a cultural piece, but the themes of family are universal, so I think that’s another thing our leadership was drawn to,” added producer Becky Neiman-Cobb. “It’s cute and weird.” The story beats didn’t change very much during development, but Shi struggled with the twist, which metaphorically summarizes parental control. It was very personal and helped her better understand the conflicts she had with her parents from their points of view.

“I would re-board different ideas about how the reveal would take place,” Shi said. “I would show it to lots of people, pulling in different groups. Is this clear? Is this reading? Through those notes, I was able to carve it out.” While working on “Incredibles 2” (boarding some of the hilarious bonding between eccentric costume designer Edna Mode and Super toddler Jack-Jack), Shi also elicited advice from director Brad Bird. “Because the dad is not present during the [bonding] montage between mom and Bao, Brad suggested that if you show him exiting the dining room intro, the audience will stop thinking about him,” she said. “And that made all the difference. I didn’t want to get rid of him and have mom be completely alone in the house.”

There were plenty of animation challenges dealing with characters with such enormous heads and small bodies, so Shi encouraged the artists to break the models and stretch the limbs and lock the camera. But getting the look of the dumplings was harder than anything else. Fortunately, Shi’s mom, Ningsha Zhong, a real-life dumpling master, served as consultant. The animation team shot her folding techniques and then painstakingly recreated them in CG. “This was not ‘Ratatouille,’ this was Chinese food,” Shi said. “Dough is a big challenge, and especially the pork filling, It took many iterations. Also, we couldn’t copy it exactly. The filling looks dull and gray. We had to make it look better. We looked at food photography and upped the saturation and made it look brighter and fresher. One of the notes was to make the carrot and onion chunks bigger and brighter and more colorful. More chunks, less paste.” So far, working at Pixar has been one great experience after another for Shi, learning from Docter, Bird, and story supervisor-turned director Josh Cooley (“Toy Story 4”). “They’ve been very patient and kind and open with me,” she said. “And they’ve given me a lot of opportunities to stretch myself creatively. I really enjoyed participating in the brainstorming sessions with how the Riley character in ‘Inside Out’ would be growing up, drawing from my own experiences as a little girl, drawing on the wall and all that sort of stuff.”

And now that Shi’s got a taste of directing, she’s developing her own feature ideas. “I definitely want to keep putting in all the elements that I love from ‘Bao’ into a feature,” she said. “That weirdness, that fun energy, the surprises. But it’s still early.”

This Article is related to: Film and tagged Animation, Bao, Incredibles 2, Pixar, Women in Film