Joel Church-Cooper explains the tricky process of finding laughs in dire situations and how Hank Azaria's obsessive preparation helped make one of the episode's funniest moments. 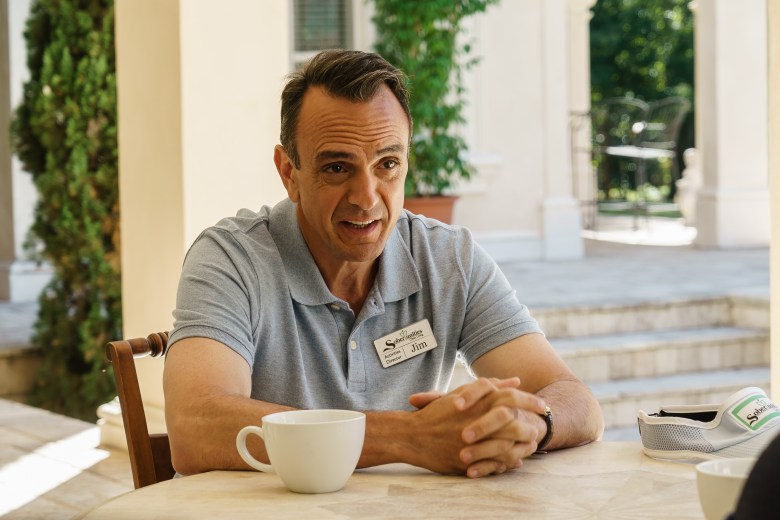 [Editor’s Note: The following contains spoilers for the “Brockmire” Season 2 finale, “In the Cellar.”]

Right around the point when Elle (Carrie Preston) picks up a revolver for a game of Russian Roulette, the Season 2 finale “Brockmire” stops being funny. It’s only for a short while, but you’d understand why filming that pivotal scene may have caused some of the crew members to think the show had changed for good.

“As I always would tell people on set, like when the stunt coordinator’s handling the gun, ‘Don’t worry guys, this is a comedy. It’s a comedy. I’m telling you right now, it’s going to be funny. It’s funny before this scene and it’s going to be funny after,'” series creator Joel Church-Cooper told IndieWire. “We’re trying to push the character and push the content and explore new spaces in TV. It’s the golden age of television. Why the hell not explore and go as far as you can to make something new, while also having hard jokes that are funny?”

That fine line between laughs and tangible danger is something that the IFC show has made part of its DNA over its two seasons. And even when Elle’s drastic actions land her in the hospital, “Brockmire” still finds a way to make time for jokes. Just a few scenes after the wayward ex-big league baseball announcer has finished a particularly intense bender, Jim Brockmire (Hank Azaria) gives himself over to an MDMA-induced groove, vibing on a nearby heart monitor.

Read More:  ‘Brockmire’ Review: Hank Azaria Is Much More Than a Cartoon in a Surprising Season 2 That Steps out of the Baseball Booth

“We are aware we were a bit on the edge of the diving board and we didn’t really want to fall in. We didn’t want to lose the audience that we had taken this far,” Church-Cooper said. “So we were adamant that there needs to be a big comedic setpiece that happens immediately after the hospital room sequence. One of our writers, Rene Gube, who’s a writer on ‘Crazy Ex-Girlfriend’ pitched, ‘Sorry, my body’s gotta talk right now.’ That made the entire room bust up and we’re like, ‘That’s the bit.'”

That’s a scene that proves what the show gets in casting Azaria, someone who can pull off the absurd and keep it grounded somehow. Church-Cooper explained that those hospital sequences benefit from Azaria showing up fully prepared before filming on the season even starts.

“He shows up to Atlanta off-book on eight scripts at once. That’s the level of detail and that’s the only reason we’re able to do this ambitious a show on our tiny budget. He comes in so prepared that he’s already worked on the five dances he’s going to do and he just does that for everything. Every scene he gives you five versions, to give you an option,” Church-Cooper said. “He doesn’t really like to dance and we had to sort of play a little beep to get him used to what the rhythm was gonna be, then turn it off and let him dance to it. The one we ended up using in the show, I think he called it his ‘Jagged Edgy Version.'”

Shaken by his brush with mortality, Brockmire makes the decision to seek treatment. In a surprising move, the show jumps forward a year, slowly documenting the ways that as its title character has gotten sober, the world outside the walls of the rehab center has changed a lot in his absence. One major way is that Jules (Amanda Peet) has found herself closer to a major league job and is ready to step back into Brockmire’s life. To the finale’s credit, that means steps towards reconciliation, not an instant rekindling of their romance. That indirect approach to the Jules/Brockmire reunion was always by design.

“Obviously the traditional television way of telling their story would be that they break up at the end of the season and then two episodes into Season 2, we get them back together. We’re in this new space of television where you try different things. And I wanted to do the non-television version. I want to do the real version, which is that these are people who have an amazing chemistry together and you know, really should be together, but they’re also incredibly fucked up. They’re two fuck-ups who find each other,” Church-Cooper said. “They don’t magically become healthy because of that and to respect that, the nature of their relationship is going to have ups and downs. If the hope is that she’s going to be in every season of this show, I’m more interested in a long-tail version of their love story.”

Even with the tiny absurdities that come from the finale’s change in venue, Church-Cooper wanted to keep them grounded in reality. All the particulars of the Ann-Margaret Film Festival are pulled from his own knowledge — “The dirty little secret of ‘Brockmire’ is a lot of Brockmire’s rants and interests are mine” — and the Pete Rose dream drawings had a basis in another real-life story.

“With Pete Rose, that was actually a funny situation. We had a writer in the room who said that happened to a friend of theirs where they went in rehab. They went to visit them and they just kept drawing the same face over and over and over again and they didn’t know what it meant. Someone in the room pitched, ‘What if that was Pete Rose’s face?’ and then we all laughed and I was like, ‘Yeah, that’s it,'” Church-Cooper said.

Aside from the smaller details, “Brockmire” benefits from stepping back and seeing a bigger picture. If the most satisfying parts of the series are watching Brockmire himself adapt to his changing perception of the world, there’s plenty of canvas for the show to use. The response to one particular episode in Season 1 helped guide the show beyond the announcer’s booth.

“We really got inspired by the abortion episode in Season 1 and how well that came out and how it balanced a controversial topic in America with humor and heart. There were very real scenes that had dramatic moments that still had jokes in them that were funny,” Church-Cooper said. “That was the sort of guiding light for us in Season 2: Can we do that for a whole season? Can we sustain that? Our hope is that in that, we’ll find an audience of comedy fans who like our jokes, but also like that we’re attempting something larger than just being funny while also trying to make them laugh out loud.”

Church-Cooper said that he’s surprised the approach to that first season resonated with certain elements of its fanbase, ones that he hope were able to follow the show through its more ambitious Season 2.

“I was shocked by who really enjoyed the show, a lot of whom were really old white dudes who identify with Brockmire and liked that he was this guy tellin’ like it is and saying off-color material and a lot of them are kind of conservative. I was like, ‘I think a lot of these guys aren’t going to be able to hang on at Season 2. We’re going to lose some of these people,'” Church-Cooper said. “I was very surprised that the character resonated with a certain audience that I didn’t expect it to. I don’t think we’d have done anything differently. You never know how people are going to take things. I was surprised by how people describe Season 1 as comfort food. I was like, ‘You know, the second act break of the pilot he says he’s going to kill himself?'” That unexpected resonance is mirrored in the show itself. In the finale, Charles (Tyrel Jackson Williams) explains how Brockmire’s stand against racist fellow announcer Art Newlie has taken on a life of its own.

“What was at first with Brockmire, another instance of him blowing up his career, he kind of capriciously became a symbol for something much larger that people could identify with,” Church-Cooper said. “What was once a screw-up, a year later — without anything he did — came back in the cultural conversation in a positive way. But then that cultural conversation is also something where we keep going in Season 3. It’s not the last we’ve heard of that controversy and Art Newlie as a character either.”

If Jules and Brockmire have they’re own complicated relationship with an unknown future, the same could be said for the ex-announcer and baseball itself. Though the show veered from the minor leagues as Season 2 came to a close, Church-Cooper said that the show will always find its way back to the sport.

Related:  ‘Baroness Von Sketch Show’ Is the Best Sketch Show on American TV, and It Was Made by Four Canadian Women Over Forty

“Season 3 is not even about him back in the big league, necessarily. He’s working for a major league team, but it’s spring training. It’s still about the climb,” Church-Cooper said. “There’s something about spring and the idea of a low-stakes environment to try things out. Metaphorically, I think it works well with someone and newly sober out into the world trying to figure things out.”

With a good chunk of the season taking place before the big league season starts, the show had two location options for its spring training scenes: Florida or Arizona. Ultimately, they’ve opted to set Season 3 in the Sunshine State, with the show already renewed for a Season 4 after that.

“We’re going to do a lot of jokes about central Florida,” Church-Cooper said. “Early on, I decided that every season of the show was going to be in a different American city with some of the same characters carrying over, but a lot of new characters every time. And so it almost be like a new show at the same main character. What I always say about ‘Brockmire’ is it’s about an asshole who gets better as a country gets worse. That’s the sort of underlying story we’re telling over the course of four seasons.”

“Brockmire” Season 2 is now available to watch via IFC.

This Article is related to: Television and tagged Brockmire, IFC, Joel Church-Cooper