Take a few people obsessed with serial killers, add a detail freak like David Fincher, and the alchemy is undeniably compelling. 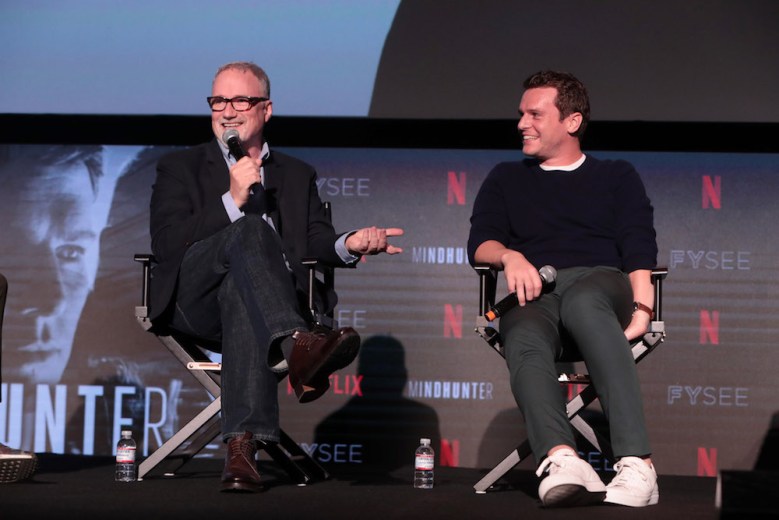 The series may never have existed if executive producer Charlize Theron hadn’t recognized a fellow serial killer buff in Fincher. When the actress was researching her Oscar-winning role as sociopath Aileen Wuornos in Patty Jenkins’ “Monster,” she read John Douglas’s “Mind Hunter,” about the groundbreaking ’70s FBI unit that pioneered research into serial killers.

“This guy had an incredible life,” she said. “What he does is so rare and mind-blowing. I’m fascinated by books on neurology and brain development and why people are sociopaths: They cut off all emotion in order to do horrible things. I bought the rights to his book. I thought about Fincher, who loved ‘Zodiac’ and ‘Seven’ [and thought] ‘He must be obsessed with this stuff too; he must know who John Douglas is.’ People said, ‘You have never produced television.’ I asked David to lunch and he knew about Douglas and was on board: ‘Let’s make it into a series.’ Dream big, motherfuckers!” The director applied his characteristic focus to the entire production, from having all of showrunner Joe Penhall’s scripts finalized before shooting for a year in Pittsburgh, to careful casting and rehearsals before filming four out of the 10 episodes. Fincher stayed on set throughout the shoot, even when he wasn’t directing. The series storytelling is deceptively simple and unshowy. It’s all about framing and nailing the precise power dynamics within the mise-en-scene, from banal windowless basement offices at Quantico to a range of hideous prisons and local jails.

For one 11-12 page interrogation scene, the production designer Steve Arnold recreated a cage he found in an actual prison. “Bars outside, stone walls inside and a cyclone fence cage; three or four visible layers of incarceration,” said Fincher at a Netflix panel. “We start with that conversation, shooting the shit, as the prisoner tries to avoid answering any questions, and they’re chasing him around the space getting him to talk.”

To capture a maximum-security prison, Fincher locked his cameras for 85 feet on a close-up tracking shot of Groff walking, letting the horrific cacophony of sounds bring the environment to life. “Everyone who has ever been in prison will tell you, it’s the sound that is unnerving,” said Fincher. “Male aggression bouncing off the tiles, upstairs and downstairs, screams. We turned it into a big sequence to get him to walk straight down the hallway. We could do more unsettling things with the sounds than with all the gruesome inmates with tusks or whatever. It sounds like  a slaughterhouse, basically, cries and moans.” Over the course of the series, Groff’s uptight man in black becomes an increasingly more confident and aggressive investigator, and lover to his more sophisticated academic girlfriend (Hannah Gross). “He was having his sexual awakening with his girlfriend while he was interviewing psychosexual murderers,” Groff told me after the panel. “It’s about his psychology and sensibility and ability to be empathetic. J. Edgar Hoover had been dead for four or five years once we hit the late ’70s transition from straight-laced G-men into the late-’60s vibe creeping into the FBI … They were just coming up with the term ‘serial killer’ we’re so familiar with now; they’re putting it together. There’s an innocence that is noble and worthwhile — and complicated and depressing.”

On the four episodes Fincher directed, the regular cast knew what to expect in the way of meticulously precise line readings and subtle shadings that can be refined for as many as 75 takes for one 11-page scene shot with three cameras. “The interrogation scenes are like theater,” said Groff. “We rehearsed every morning. David was specific with us about every single word and every turn of the scene. Sometimes on the day of shooting, we’d go into the room and sit down and talk about how one move forward can change the whole dynamic of the conversation.”

After each take, Fincher would give each actor notes to follow for the next continuous shot. “I didn’t mind,” said McCallany. “I find that when you do something over and over again, you discover things. From take 15 to take 20, something becomes apparent you didn’t realize. Even subtle adjustments David will give will make a huge difference in how the scene plays out.”

Each interview with a serial killer was different as the FBI men get them to talk. “Can you have empathy for someone who is so disgusting and horrible and such a terrible person,” asked Groff, “and give them the space to talk? What can you glean from that? The depressing thing about the show is there’s a bottomless pit in the end. One of the overarching themes of the show is that the idea of human evil is unknowable, in a way.”

Groff was fascinated by how “each interview was different in the gaining of knowledge and the language used to get them to open up. Working with David, he makes sure every word has attention, every comma and period. Everything is so intentional. He’s the creator of the show, so we would get into the meat of a scene and his imagination would get turned on, he could change and shift and move things that the other directors didn’t have permission to do.”

Bill Tench is based on Fincher’s uncle, he said: “He’s got issues, he’s running away from his family a little, he’s trying really hard, within certain boundaries, to do what’s right.” As far as Fincher is concerned, everyone in this series has a right to a strong point of view. “I don’t like characters in drama who are obviously, patently wrong, saying something stupid because we need an adversary or a conflict,” he said. “I prefer arguments among five people who are all right, who all passionately believe what they are doing is the right thing.” Fincher tried to stay away from fancy camerawork. “People think cinematography is about people putting their stamp on it, a filigree to make it attractive,” he said. “With a story like this, it was important to embrace that which is mundane: People are hunting other people hiding in plain sight. Even Ed Kemper at 6-foot-9 is hiding in plain sight. This is not a macabre phantom-of-the-opera character.”

Even the Episode 10 finale hospital scene, in which a shackled Kemper rises out of bed to physically threaten Ford, is terrifying in its plain unfolding. “It’s nice to let it be simple, what it is,” said Fincher. “What is the room, the space, the light, the environment? What about this is real? What’s essential, what has to play out? What’s the dance? What’s the power dynamic between these people in the conversation? Ed Kemper is totally forthcoming; he’ll tell you anything in his head, he’s searching for a chainsaw. How do you glean something important from people who are overly solicitous and possibly unreliable and the people who are withholding everything? It’s a game of chess.” Fincher finally met Cameron Britton, the six-foot-nine actor accustomed to playing bodyguards and bouncers, after five auditions. They met during the sixth, a screen test for the role of Ed Kemper. Fincher told him “to play this guy laid back, mellow, it means nothing to him,” said Britton.

“The tape was undeniable,” said Fincher, who instantly decided that Britton should not be allowed to bond with his castmates: “Make sure Cameron doesn’t talk to anyone. He can’t fraternize. I don’t want this to be a social thing. He has to literally come from Pluto and be in the show. He can’t be indoctrinated into what anyone else is up to, it has to be that this guy shows up, he’s got all the time in the world, 13 life sentences, and he’s going to tell you what you want to know. During the read-through, it was telling that if we can get that on film, we’re going to be fine.”

Britton couldn’t make Kemper too narcissistic. “There was always more to find,” he said. “He’s almost become a Zen master within himself, he leans into his own sociopathy: ‘I can make this work for me, I can take apathy.’ And as humans we are drawn to apathy, the way we are drawn to the cool kid in high school who didn’t care about anything. ‘I don’t need to care about anyone, that’s only going to benefit me.’ If you talk about his favorite subject — himself — you’re playing with house money.”