De Niro made headlines at the Tony Awards on June 10 for saying, "F*ck you, Trump." 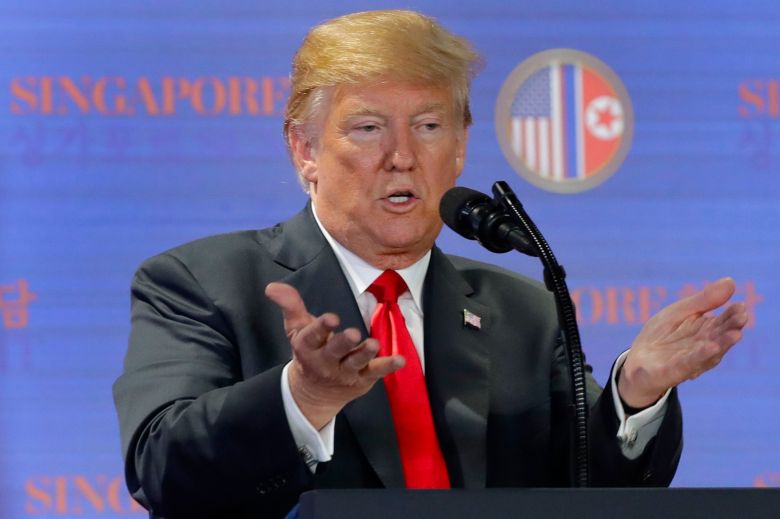 Donald Trump has responded to Robert De Niro’s Tony Awards takedown by calling the Oscar-winning actor a “very low IQ individual.” De Niro made headlines at the Tony Awards on June 10 when he went off script while presenting a performance by Bruce Springsteen to say, “Fuck Trump! It’s no longer ‘down with Trump.’ It’s ‘fuck Trump!’” De Niro’s Trump dig earned a standing ovation from the crowd at Radio City Music Hall.

“Robert De Niro, a very Low IQ individual, has received [too] many shots to the head by real boxers in movies,” Trump wrote on Twitter. “I watched him last night and truly believe he may be ‘punch-drunk.'”

Trump continued in a follow up tweet: “I guess he doesn’t realize the economy is the best it’s ever been with employment being at an all time high, and many companies pouring back into our country. Wake up Punchy!”

Trump’s De Niro takedown on social media came hours after his historic meeting with North Korean leader in Singapore. The two leaders met at a summit to discuss the move toward North Korean denuclearization.

De Niro’s Tony Awards comment was the latest in a long history of public criticisms the actor has made against the President. Attending the National Board of Review awards ceremony at the start of 2018, De Niro called the President a “fucking idiot” and referred to him as both “baby-in-chief” and “jerkoff-in-chief.” De Niro made headlines again at the Tribeca Film Festival in April for calling Trump a “mad man” and a “low life.”

…realize the economy is the best it’s ever been with employment being at an all time high, and many companies pouring back into our country. Wake up Punchy!

This Article is related to: Film and tagged Donald Trump, Robert De Niro