The president's son took to Twitter to blast the distributor over comments made by the film's supporting actor regarding Trump's zero-tolerance immigration policy. 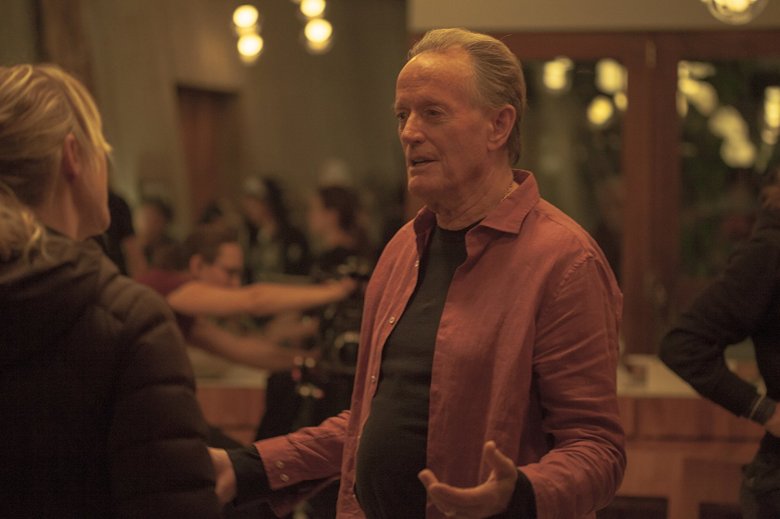 Peter Fonda on the set of “Boundaries”

In a tweet posted late last night, veteran Hollywood star Peter Fonda issued some strong (read: all-caps) words regarding President Donald Trump’s zero-tolerance immigration policy which has led to the forced separation of thousands of children and their parents at the Mexican board. In a now-deleted tweet (which you can see on TheWrap), Fonda wrote: “WE SHOULD RIP BARRON TRUMP FROM HIS MOTHER’S ARMS AND PUT HIM IN A CAGE WITH PEDOPHILES AND SEE IF HIS MOTHER WILL WILL [SIC] STAND UP AGAINST THE GIANT ASSHOLE SHE IS MARRIED TO.”

Fonda’s suggestion that the Trumps’ youngest son be “put in a cage with pedophiles” appeared to reference a recent news story (via NBC News) regarding a Texas sheriff’s deputy who was charged earlier this week for “super aggravated sexual assault” of a 4-year-old girl after her mother, an undocumented immigrant, said she was “being blackmailed to stay silent about the abuse — or face deportation.”

While that story has stirred up recent outrage, it’s hardly the first of its kind. In May of this year, the ACLU issued a report that found “widespread allegations of misconduct by U.S. border authorities toward children, including kicking one in the ribs, denying medical attention to a pregnant teen who complained of pain and threatening others with sexual abuse.”

In another tweet, also deleted by the actor, Fonda said that protesters should “get the addresses of the Ice Agents CBP agents and surround their homes in protest. We should find out what schools their children go to and surround the schools in protest.”

Both tweets were met with condemnation from Trump supporters, including his son Donald Trump Jr., who has used it as an opportunity to target Sony Pictures Classics, which is releasing the Shana Feste film “Boundaries” later this week, one that feature Fonda in a supporting role. Trump Jr. and his followers also took to Twitter to call for a response from the distributor, with Trump Jr. writing, “I wonder if they will apply the same rules to @iamfonda that they did to @therealroseanne.”

ABC notably cancelled Roseanne Barr’s eponymous show after she came under fire for sending racist tweets. Sony Pictures Classics is owned by the Sony Corporation, which has no relation to ABC. You can see some of Trump’s tweets below.

As an FYI @SonyPictures has a movie with him dropping in a few days. I wonder if they will apply the same rules to @iamfonda that they did to @therealroseanne. I have a strange suspicion that they wont do anything. Please RT, we deserve an answer! https://t.co/j38NnlJKn7

I didn’t think it was possible but @iamfonda found a way to be as disgusting as his sister Jane was when she stood with the enemy in Vietnam.

Doesn’t get more vile than wishing for a young boy to be raped by pedophiles.

There’s a special place in hell…

Moreover, The Wrap reports that “Melania Trump’s spokesperson was quick to denounce Fonda: ‘The tweet is sick and irresponsible and USSS has been notified.'” The outlet added, “the U.S. Secret Service told TheWrap that is aware of the tweet but declined to offer any additional comments.”

While Fonda deleted his initial tweet, he did issue two follow-ups that offered his support for an upcoming planned nationwide protest.

It’s more than a protest! 90 million people in the streets on the same weekend works. I can’t be the organizer for they’ll arrest me for conspiracy to commit sedition. This must be like a spontaneous event without seeming to be organized by me and we have to make this happen NOW https://t.co/be9IDUN15c

Fonda provided TheWrap with an official statement apologizing for the tweet, which reads as follows: “I tweeted something highly inappropriate and vulgar about the president and his family in response to the devastating images I was seeing on television. Like many Americans, I am very impassioned and distraught over the situation with children separated from their families at the border, but I went way too far. It was wrong and I should not have done it. I immediately regretted it and sincerely apologize to the family for what I said and any hurt my words have caused.”

UPDATED WITH NEW STATEMENT FROM SPC:

“Peter Fonda’s comments are abhorrent, reckless and dangerous, and we condemn them completely.  It is important to note that Mr. Fonda plays a very minor role in the film.  To pull or alter this film at this point would unfairly penalize the filmmaker Shana Feste’s accomplishment, the many actors, crew members and other creative talent that worked hard on the project. We plan to open the film as scheduled this weekend, in a limited release of five theaters.”