After a janky first act, Brad Bird finds the groove he's been looking for ever since "Ratatouille." 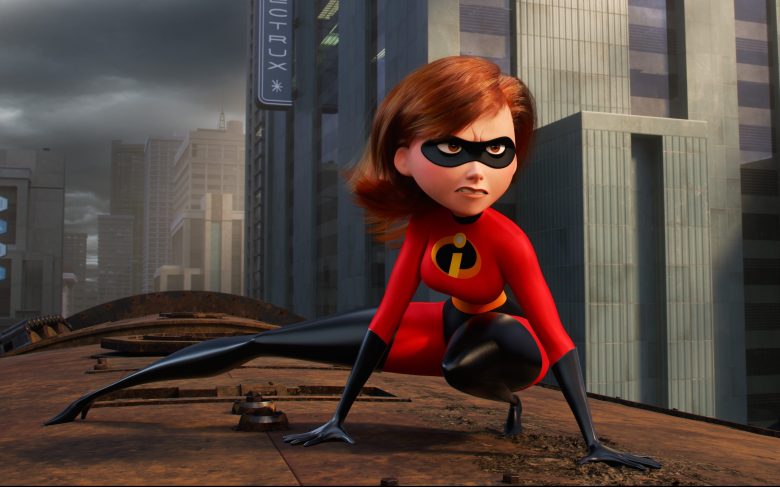 In a film that isn’t particularly full of bold choices, “Incredibles 2” starts with a doozy: It picks up right where the first one left off, seeming to ignore the fact that a lot has happened in the 14 years since Brad Bird first joined forces with Pixar. The world is no longer the same place that it was in 2004, and the state of its superhero movies is similarly unrecognizable from what it was back then. Faster than a speeding bullet, the genre has become a major engine of the modern Hollywood machine, and the idea of a world without superheroes is now as unfathomable to us as it always was to Mr. Incredible, himself.

A clever pastiche that played like Norman Rockwell’s “Watchmen,” “The Incredibles” may have exploited familiar tropes, and even flirted with some light Randian thinking in its family-driven story about the difficulties of finding a balance between the ordinary and the exceptional, but the film was animated by the inimitable confidence of a fresh creative vision. “Incredibles 2,” which gets off to a rocky start before growing into one of the great movies of its kind, was never going to have the same advantage. If anything, starting the sequel with a continuation of the same action sequence that ended its predecessor only helps to underline how much times have changed.

There’s a shadow of obligation around “Incredibles 2,” a whiff of this again? that seeps into the opening shots and stinks up the joint for the entire first act. Sure, the animation is much more nuanced and expressive than it was before — so much so that it makes the blocky textures of the original look like a cut-scene from a Sega Saturn game by comparison — but the fact that CG animation ages worse than leftover sushi on a hot day isn’t enough to justify another movie. The writing isn’t sharp, the characters are stuck in place, and the reasons why the super-powered Parr family is forced into hiding are too easy to ring true.

Once again, Mr. Incredible’s crime-fighting efforts cause so much collateral damage to the city of Municiberg that the government decides Supers aren’t worth the cost of cleaning up after them. In fact, the whole Super Relocation program shuts down. It’s only when sibling billionaires Winston and Evelyn Deavor (voiced by Bob Odenkirk and Catherine Keener) take a sudden interest in Bob and Helen Parr (still Craig T. Nelson and Holly Hunter), promising to bankroll a promotional campaign that will sell the world on Supers, that Mr. Incredible and Elastigirl have a chance to fight again.

Well, Elastigirl does, anyway. Bob is deemed too oafish and destructive to help the cause, so he’s left with the kids in the family’s new retro-futuristic rental home (complete with sliding floor panels atop an indoor moat) while his wife is out there doing Super stuff. Fitting back into his Edna Mode suit was one thing, but squeezing into a non-traditional gender role? Quoth Elastigirl: “I don’t think so!” Let’s just say that Mr. Incredible isn’t as flexible as his wife, who’s a bit rusty but still ready for action. And it’s a good thing she is, because the homicidal Screenslaver — who uses a remote signal to hack people into doing their bidding — isn’t going to fall without a fight.

And then something changes. When the Parrs are pushed out of their comfort zone, Bird settles into his, and “Incredibles 2” finds a groove the filmmaker has been looking for ever since he finished work on the ingenious “Ratatouille” in 2007. Once the menacing and mysterious Screenslaver is introduced, inciting a Spielberg-level monorail chase that reaffirms Bird’s lucid gift for kinetic and character-driven action filmmaking, the movie blasts off and never looks back.

The rest of “Incredibles 2” fires on all cylinders, jumping between Elastigirl’s euphoric efforts to save the world and Bob’s exasperated attempts to put out fires at home (often literally, as one of baby Jack-Jack’s uncontrollable powers includes transforming into a flame-covered demon child). Both plot threads work on their own, and knot into something even stronger — and often exhilarating — as Bird ties them together.

Hunter continues to be the heart and soul of this franchise, with her inimitable Georgia drawl helping to make Helen one of the most soulful and expressive animated characters ever drawn (it doesn’t hurt that Elastigirl’s self-possessed excitement allows Hunter to channel her immortal performance from “Broadcast News,” a callback that Bird makes sure that we catch). Nelson assumes more of a supporting role this time around, but he still finds a way to personalize the standard-issue dad anxieties that wrack his character. Whether trying to help his son Dash (Huck Milner) with math homework or encouraging his shy daughter Violet (Sarah Vowell) to talk to her crush, Bob finds all the excitement he can handle under one roof. And that’s before Jack-Jack starts teleporting to other dimensions, or — in one of Pixar’s funniest gags — using his superpowers to battle the persistent raccoon who lives in the backyard. By all rights, the Jack-Jack stuff should be pandering and insufferable, but Bird’s enthusiasm for the character is contagious, and he knows that every parent can relate to the boy’s ingenuity for chaos.

As with all of Bird’s films, “Incredibles 2” is at its best when reconciling the mundane with the magical. The Parrs want to be Supers and ordinary parents, but they live in a world that’s constantly forcing them to choose between their identities. While Bird is always encouraging people to appreciate the incredible things in their own lives (as the refrain from “Ratatouille” goes: “Food will always come to those who love to cook”), his characters are forced into conflict with some rather binary thinkers.

“The Incredibles” villain Syndrome resented other people for their blessings, and was hellbent on leveling the score — for him, the world had to be super or ordinary, and there was no gray area in between. The elusive Screenslaver is similarly uncompromising. Their plan runs deeper than a review should reveal, but it’s safe to say that it involves liberating society from its crutches: breaking all screens; destroying all Supers. And while it’s somewhat odd for a film set at the tail-end of America’s “Leave it to Beaver” heyday to serve as an unsubtle analogue for our current plague of smartphones, it works because Bird never sees vice without virtue.

Maybe our reliance on technology — or Municiberg’s reliance on the Incredibles — has made people weak, and put everyone at a distance from their world. But is that reason enough to sacrifice such wonders? As every member of the Parr family learns for themselves: The great things in life are never easy, and the easy things in life are never great. Yet Bird tasks each of us with the work of making those different things serve and sustain each other. “Incredibles 2” stresses the ordinary elements of Super lives so that we can appreciate the Super elements of ordinary ones. Of course, “Incredibles 2,” for all of its domesticity, is never dull. As always, Bird stuffs his film so full of stuff that it can feel like a workout just to keep up. Life is messy — life in Municiberg sometimes even more so. At times, it feels like Bird is just throwing a bunch of contradictory ideas into direct competition with each other, happy to roll with whatever ideas and characters manage to survive the story. “Incredibles 2” has a lot of both. While the Deavor’s are severely underwritten, propped up only by the actors playing them, other new faces come through.

Best of all are the second-rate Supers the Deavors round up as part of their promotional campaign, a “Mystery Men”-inspired coterie of rejects and oddballs. Their ranks include Reflux (an old man who vomits fire), Screech (a humanoid owl) and Voyd, a young woman (modeled after a certain modern starlet) whose powers essentially show us what a Pixar version of “Portal” might look like. The third act finds Bird assembling these characters with such clockwork precision and brilliant comic timing that you can’t help but wish he’d been handed the reigns on “Avengers 4” — needless to say, Thanos would kill all human life to be involved in an action sequence that’s even half as fluid and thrilling as the one that brings “Incredibles 2” to a close.

And while Bird doesn’t take any cheap jabs at the superhero movies that have sprouted up since he first put his imprint on the genre, “Incredibles 2” — in its own, backhanded way — does kinda sympathize with Screenslaver’s point. Superheroes have made us lazy. Maybe not as citizens, but as consumers and creators. They’ve become too automatic. And yet, these stories have so much to offer, and the solution isn’t to just stop telling them. The solution is to make character-driven blockbusters that use spectacle in order to help us better see ourselves. To take a mesmerized people and transform their screens into lenses and mirrors. To put the human and the super in conversation, and listen to what they have to say about each other. “Incredibles 2” doesn’t make that look easy, but that’s part of what makes it great.

This Article is related to: Film and tagged Brad Bird, Incredibles 2, Pixar, Reviews