Pixar is staying mum on whether a new Super called Voyd is based on the "Personal Shopper" star, but the similarities are hard to deny. 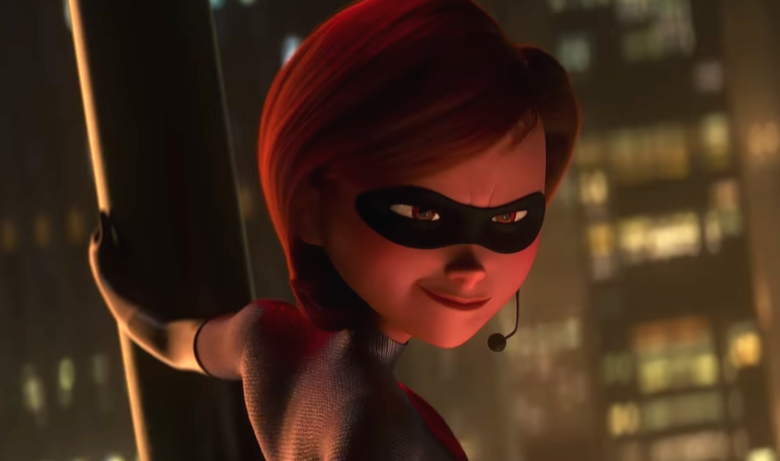 One of the things that helps “Incredibles 2” to grow into such a nuanced and effective sequel is that Brad Bird keeps the focus on the Super family he introduced the first time around. Unlike so many other superhero movies with a “2” in their title, this one isn’t necessarily bigger than the original, and it’s allowed to tell a more nuanced and expressive story as a result of that decision. There aren’t a zillion new bad guys for the Parr clan to fight — just one really sinister villain who can hijack other people from a distance (sort of like Ultron, but with a better masterplan). Likewise, there aren’t all that many previously unseen heroes added to the mix, but each of the new “wannabe Supers” leaves a lasting impression.

When Elastigirl is recruited by the billionaire Deavor siblings as part of their PR campaign to help the Super cause, she’s joined by a group of second-rate Supers who’ve been hired to provide some kind of support. Although they’re supposed to represent the best of the B-team, a more honest assessment would conclude that this motley crew of reject heroes belongs somewhere a bit deeper in the alphabet. There’s Brick, a strongman who combines Donkey Kong’s body with Conan O’Brien’s orange pompadour. There’s Screech, a humanoid owl whose head can swivel in 360 degrees, and also Reflux, an elderly gentleman whose heartburn is so bad that it allows him to vomit hot lava. And then — not quite last, and definitely not least — there’s… Kristen Stewart?

Well, not literally Kristen Stewart, but close enough that you might do something of a double-take during the character’s first scene. Her actual name is Karen, but her nom-de-boom is Voyd. She’s a young Elastigirl super-fan, and she can create portals with her bare hands. She has a swoop of blue hair, a shiny eye mask that hides her identity, and a lot of mannerisms that threaten to give it away. She’s clearly the most capable of the wannabe Supers, but perhaps not the most confident or collected — though Voyd is front and center when the wannabes first meet Elastigirl, she spends much of the interaction being exasperated herself. Stopping her words short. Casting downward glances. Reflecting on the courage it took to own her queerness. She does everything short of biting her lip or talking about her time on the set of “Twilight.” Played by Sophia Bush (whose voice sounds not unlike a sped-up version of Stewart’s), Voyd can be hard to untangle from the mega-famous actress who may have inspired her existence. At the very least, it’s the kind of thing that’s hard to un-see.

Neither Bird nor Bush were available for comment, and the potential connection between Kristen and Karen is subtle enough that some of the critics IndieWire spoke to for this article didn’t see it right off the bat. But it certainly wouldn’t be the first time that the “Incredibles” franchise borrowed a movie star’s likeness without bringing along the movie star, themselves. In fact, the very first face we see in “Incredibles 2” belongs to Tommy Lee Jones. The character is Rick Dicker, the head of the Super Relocation program, and while his voice is provided by Jonathan Banks (the “Better Call Saul” actor taking over for Bud Luckey, who voiced the part in the previous film and died earlier this year), his face definitely belongs to Tommy Lee Jones. The opening scene even ends with Dicker using a neuralyzer!

The similarity has always been undeniable — to the extent that it seems more like a loving homage than lazy character design — but the sequel’s more detailed and sophisticated animation erases any lingering doubt. In “Incredibles 2,” the resemblance is barely disguised; it looks like someone took a photo of Jones and then Pixar-ized it with a Snapchat filter.

On one hand, these similarities can be a little distracting. On the other hand, they provide a perfect shorthand for understanding what these characters are all about — time is precious in any movie, let alone a frenzied animated superhero epic that juggles several different stories at once, and familiar archetypes naturally help Bird to accomplish more with less. One look at Dicker, and you know (or remember) everything you need to know (or remember) about the guy: He’s a no-nonsense member of “the deep state” who lives to keep the secrets that could shake our world to its foundation. Exploiting our cultural memory and collective understanding, Bird instantly conveys the information he needs for the character to serve his purpose.

Likewise, Voyd may not be a direct imitation of Kristen Stewart — she’s more of a caricature than a photocopy, equally brilliant though maybe a little bubblier — but anyone who sees a similarity between them is given a head start to understand what this aspiring Super is all about, and also to appreciate that her shrinking public demeanor might hide tremendous power. If that’s not enough, the K-Stew-ness of it all helps to distract from the extent to which Voyd’s abilities owe a bit too much to the video game “Portal” (though Bird exploits their effect to such cool effect that it’s hard to imagine anyone getting too worked up about that, especially now that being Kristen Stewart seems like a legitimate superpower in its own right).

Regardless of the extent to which Pixar’s animators did or did not channel real-life celebrities for the characters in their latest creation (they totally did, though), their ability to thread the needle between imitation and infringement, and to do so towards such amusing ends, is impressive. What it portends for an industry that’s opened a forever portal between the analog and the digital — and a future that will continue to smudge the line between a person and their avatar — remains to be seen. Perhaps we’ll find out in “Incredibles 3.”