"I won't allow you and your sycophants to turn your cruelty into virtue," Stewart said from behind the desk on "The Late Show." 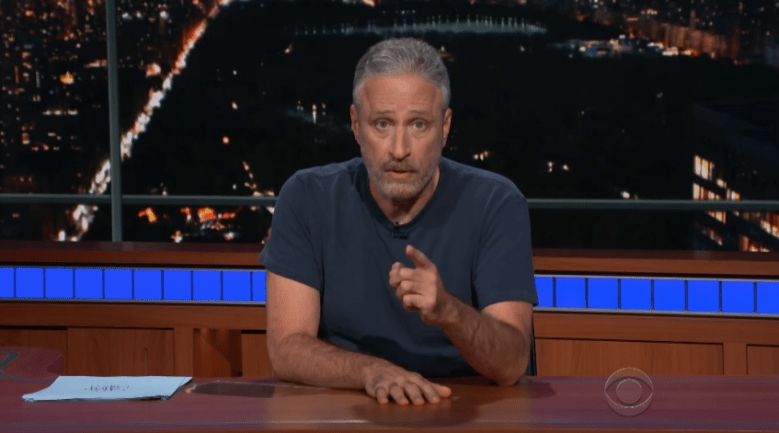 Like a groundhog arriving to announce a few extra months of political comedy, Jon Stewart made a return appearance to “The Late Show” on June 28, taking over the desk from host Stephen Colbert. Seemingly wore down by a news cycle that’s been particularly disheartening for much of June, Stewart had a more reserved tone as he swapped out for a brief segment directly addressing Donald Trump.

With Colbert waiting patiently out of sight under the desk, Stewart had 6 minutes of uninterrupted airtime to release some pent-up Trump thoughts. Taking on the President’s recent handling of an immigration crisis of his own making and the overarching “dickishness” of his first year and a half in office, his desk piece included a few negotiating tactics jokingly offering Trump things to placate the intensifying pettiness coming from the Oval Office.

Though Stewart has made frequent “Late Show” appearances during his former correspondent’s hosting tenure (and also dropped by an episode of the HBO version of “2 Dope Queens” earlier this year), this is a rare post-“Daily Show” example of Stewart actually getting to do some material in line with his old gig.

(Even if this isn’t the strongest, sharpest rebuke of the current administration or the Oval Office occupant, it’s at the very least a nice reminder that Colbert and Stewart clearly enjoy working together still. Those fake whispers in Stewart’s ear are a momentary example of two comedians trying their best to wring some moments of levity from a particularly dour stretch in American politics.)

Watch the full segment (including an Arnold Schwarzenegger clip) below: