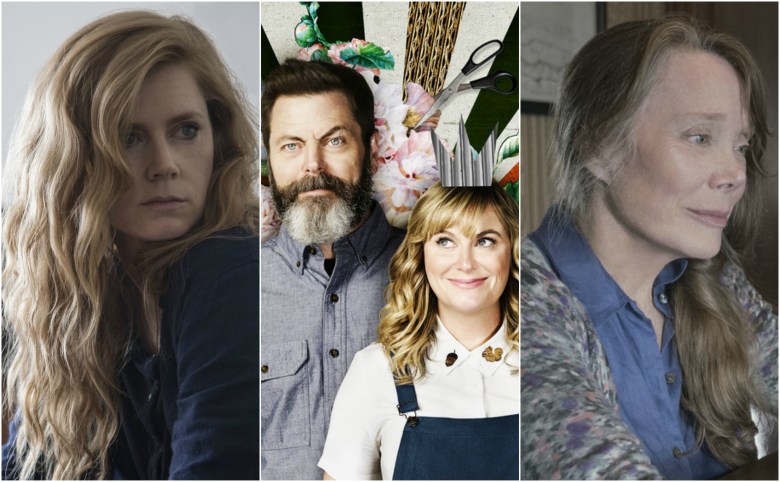 As summer begins to really take hold, July might not be as packed with headline new shows as previous months were. But for anyone who thought that the allure of the sunny outdoors would curb the insatiable appetite for new TV shows: think again.

(We do this every month — if you missed any of those previous picks, here are some notable TV premieres from February, March, April, May, and June.) It’s been a big week for Adult Swim, with the mesmerizing “Mr. Neighbor’s House 2” premiering this past Sunday night and a new Casper Kelly short in the Infomercial slot. Now, to keep that momentum going comes this unclassifiable piece of satire (?) about a hyperconnected generation with a criminally short attention span. (From the trailer, this appears to involve food in many places on the human body other than the mouth.)

One of the summer’s most anticipated series feels like one of the seasons surest bets. With Jean-Marc Vallée behind the camera just over a year after “Big Little Lies” became a TV phenomenon, Amy Adams in her first high-profile TV star role, and Gillian Flynn right on the precipice of “Widows” later this year, all the pieces are in place for another chilling HBO mystery.

Chef Magnus Samuelsson hosts this PBS food/travel series that samples global cuisine without leaving the country. Over the course of six weeks, Samuelsson travels to different parts of the United States to sample delicacies and home-cooked favorites from the immigrant communities in cities like D.C., Detroit, New Orleans, and Chicago. Genocide, religious fanaticism, and a dictatorial warlord? This CW is not letting up with its supernatural fantasy premise. Jessica Green stars as Talon, a young woman bent on revenge after soldiers murdered her entire bloodline. The series is written and created by prolific genre duo Jason Faller and Kynan Griffin. Game shows come and go on TV, but this one is one of the first to try to provide its winners with a very specific financial reward. With Torpey as the host, contestants compete for a cash prize that will go towards paying off student loans. And it’s trivia, so it’s automatically better than a half-court shot. Anyone still mourning the disappearance of “Wipeout” from the TV airwaves may have a potential replacement in this new competition series hosted by Kevin Hart. Rather than having each contestant be at the physical and psychological mercy of an obstacle course, TKO players will have to face each other as they try to knock their fellow contestants off their respective perches.

For 5 years and 144 episodes, Leonard Nimoy hosted this series about the paranormal curiosities of life on Earth, throughout history and during that late-’70s/early-‘80s era. Now, over three decades later, another Spock actor, Zachary Quinto, will take the mantle for a 21st-century update. Episodes will investigate different topics like bizarre aquatic life, the feasibility of time travel, and the full capabilities of the human brain. Cause One Productions Inc.

“Smallville” vet Kristin Kreuk stars as Joanna Hanley, an upstart attorney who pulls a reverse Brockovich and scores a legal win against a group of ailing high school girls. In the wake of the ruling, Joanna changes course and reexamines her place at her firm and her chosen profession. The series follows her journey back to her hometown to find answers and fix the missing parts of her personal and professional lives. As we get closer and closer to the release date, different pieces of this enigmatic Stephen King-based TV show are becoming clearer. But as of now, with J.J. Abrams as an executive producer on the series, part of this experience will be finding out how all of the author’s many written works will manifest himself in a series based in the fictional town King created for his work. Andre Holland, Sissy Spacek, Melanie Lynsky, Bill Skarsgard, and more make up an ensemble peppered with vets of previous King adaptations. There will be Shawshank.

In another spin on the food travel show, this new unscripted series goes inside the world of nutrition experts working for Tour de France cycling teams. As the Australian team Orica-Scott goes for yellow jacket glory, Chef Hannah Grant looks at how the culinary support team optimizes flavor and nutrients to keep the riders’ stamina and performance at optimal levels during the grueling climb through the French mountains. 3 years after last playing the two of the greatest coworkers in TV history, Amy Poehler and Nick Offerman return to NBC for a reality competition show extolling the virtues of homemade craftsmanship. Each episode, these hosts and their knowledge of woodworking and fabric-based crafting will help serve as judges for the competition show. The series will occupy the Tuesday night summer slot right after “America’s Got Talent.”

[Note: A previous version of this piece stated that “The Disappearance” would be premiering on WGN America this month. The network has rescheduled the series for a 2019 premiere.]