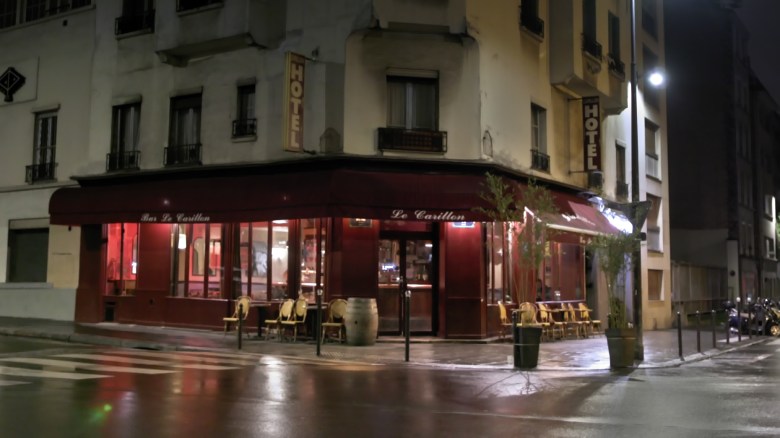 The clock tracking the timeline of the events depicted in the new Netflix documentary series “November 13: Attack on Paris” takes up nearly the entire screen. The coordinated terrorist shootings and explosions of that night in November 2015 happened in a timeframe shorter than any thorough examination of the number of victims, both killed and still living, could handle in real time. Instead, directors Gédéon and Jules Naudet anchor their account of what transpired in the testimony of those who lived through it.

Though not depending on footage from the shooting at the Bataclan theater and attacks on four restaurants as much as in their noteworthy feature documentary “9/11,” the Naudets do orient the viewer to understand which of these events were happening concurrently, particularly how law enforcement and government officials responded to the events as they were unfolding. Rather than show the aftermath of the destruction, “November 13” affords the men and women who survived these various strikes to describe their experiences in their own words.

The Naudets show incredible restraint in telling this story, largely foregoing any dramatic music stings or pulsating cues meant to direct the audience’s emotions. Instead, the silence as these individuals gather themselves telling their stories carries far more dramatic weight. That attention to the sensory elements of the evening plays out in the cellphone video from the evening that “November 13” does use. One particular video of the police unit’s raid on the Bataclan unfolds all at once, complete with explosions and gunfire audible from outside the building and well across the street.

Rather than use the format to investigate the motivations behind the attacks or the political aftermath, “November 13” foregrounds these victims stories, filtering the day through those who survived it. Any discussion or description of the shooters is there to give necessary context to those who are able to talk about them. And though you can sense an incredible amount of emotion lingering just beneath the surface, there is surprisingly little anger here. This is not a project of revenge, but a memorial. The goal is not to vilify those responsible for these attacks, except through the condemnation of the physical and emotional toll they left in their wake.

One of the more surprising elements of “November 13” is that it doesn’t attempt to find a universal response to the attacks. Although there are some commonalities to be drawn in how different people responded to a split-second choice that often meant life or death, this series does not force these testimonies into a tidy, traditional narrative. Couples are separated, strangers are thrust together in a time of crisis, but these stories uncover the instincts of those trapped in an impossible situation. Some act in a selfless fashion, but some still wrestle with the idea that the reason they’re alive is that they made a choice to go against what the typical expectations of being a hero would dictate. Instead, it highlights the tiny decisions, whether in a simple reminder, a silent saving gesture, or a chance circumstance that made the difference between survival and loss. Though words are inadequate to fully describe living through something like this, each participant does their best to articulate what moments like these held for them and the people that surrounded them. The Naudets don’t fetishize the grief that many of them still carry. If anything, there’s more power in seeing how this experience is so sobering to those involved that to calmly explain the details of being trapped in an orchestra pit or under the table of a cafe is the only way they know how.

Removing this story from a national or political context may not be a satisfying choice for many viewers, whether in France or outside the country. What the series gains in focus and attention, it forgoes in scope. But instead, as those timestamps pop up across the screen, it once again reinforces the idea that all of this happened in a painfully short amount of time. To have these individuals speak too much to what has happened since would dilute the power of what they experienced in those moments of uncertainty.

By removing much of the preceding and following elements of these attacks, “November 13” becomes more of an oral history of a tragedy than a statement on what should be done going forward. While it’s impossible for something like this to exist in a vacuum of perspective, prioritizing the stories of those who survived the attack itself rather than spend a greater percentage of the story on any political repercussions is a conscious choice that mitigates the opportunity for these harrowing experiences to be used as instruments for something else.

Whether it’s the individuals or their weapons that you hold most responsible, “November 13” exists as a reminder that this did happen. (This series premiered on Netflix on National Gun Violence Awareness Day in the United States, which is worth noting, even if coincidental.) Even though one of the members of the tactical team categorizes the survivors as the product of a miracle, this documentary explains that they are alive because of a very specific set of events. Rather than put those in service of something other than survival, it gives them room to relate the things that can only be shown through the eyes of those who’ve lived it themselves.

“November 13: Attack on Paris” is now available to stream on Netflix.

This Article is related to: Television and tagged Netflix, November 13: Attack on Paris, TV Reviews