We can only hope this means Ariana Grande is familiar with the work of Josh and Benny Safdie. 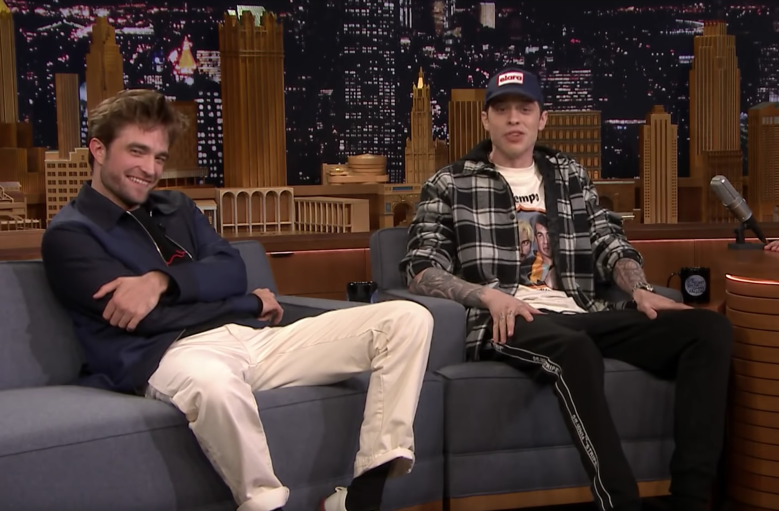 A lot of indie movie lovers were upset when Robert Pattinson’s career-best work in Josh and Benny Safdie’s “Good Time” was overlooked by the Academy for a best actor Oscar nomination, and Pattinson super-fan Pete Davidson is still not over the Oscar snub.

During an appearance on the June 20 episode of “The Tonight Show Starring Jimmy Fallon,” Davidson devoted the majority of his interview to praising “Good Time” and Pattinson, who happened to be sitting right next to him. Pattinson was on the program promoting his new indie “Damsel.”

Davidson, who has been all over the news recently thanks to his engagement to pop star Ariana Grande, appeared on “Fallon” wearing a shirt with Pattinson and Benny Safdie’s “Good Time” characters. Davidson’s hat also read “Elara,” a nod to “Good Time” production company Elara Pictures. The “Saturday Night Live” star was on the late night show to promote his Netflix rom-com “Set It Up,” but he told Fallon he’s only in that film for 10 seconds and would rather promote “Good Time” instead. Davidson even brought a clip from the indie movie to show.

“It’s one of the best movies ever made,” Davidson said as Pattinson laughed. “I”m here to promote ‘Good Time.’ It’s the most insane, crazy movie I’ve ever seen. That’s why I’m here. What? I’m going to promote a movie I’m in for 10 seconds? Which is great, by the way. Go see [‘Set It Up’]. But Pattinson should’ve gotten an Oscar! I love this movie so much.”

Davidson referred to Pattinson as “the greatest actor of his generation.” Davidson’s “Set It Up” is now streaming on Netflix, while Pattinson’s “Damsel” opens in select theaters June 22. Watch the two of them on “Fallon” in the video below.