Executive producer Tom Werner has struck a deal to continue the show without Roseanne Barr, who will not have a creative or financial stake in the spin-off. 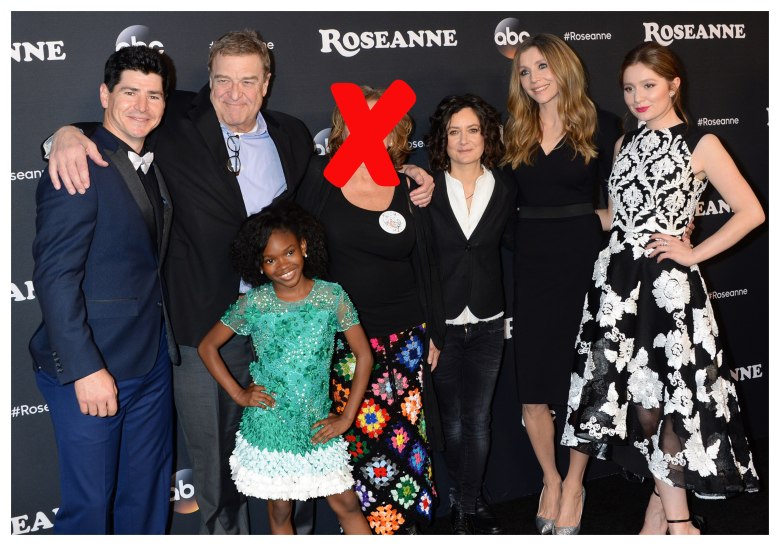 ABC just made sure its “Roseanne” cancellation will be a dominant narrative for the network heading into fall. After taking decisive action last month to cancel the show — following a racist Twitter post written by star Roseanne Barr — the network is now revisiting the series, sans its star.

“The Conners” has been given a 10-episode, straight-to-series order by ABC to premiere this fall. Billed as a spinoff of “Roseanne,” the show will feature John Goodman (‘Dan’), Laurie Metcalf (‘Jackie’), Sara Gilbert (‘Darlene’), Lecy Goranson (‘Becky’) and Michael Fishman (‘D.J.’), all back in their same “Roseanne” roles. Other cast members — including whether any of last spring’s revival newcomers return — will be announced later.

ABC was able to make the deal work after “Roseanne” executive producer Tom Werner and Barr sealed a deal, allowing him to produce a spinoff through his Werner Entertainment label (and not, notably, Carsey-Werner) without Barr’s further creative or financial participation.

“I regret the circumstances that have caused me to be removed from ‘Roseanne,'” Barr said in a statement. “I agreed to the settlement in order that 200 jobs of beloved cast and crew could be saved, and I wish the best for everyone involved.”

Added Werner: “We are grateful to have reached this agreement to keep our team working as we continue to explore stories of the Conner family.”

Per ABC, here’s the logline for “The Conners”:

After a sudden turn of events, the Conners are forced to face the daily struggles of life in Lanford in a way they never have before. This iconic family – Dan, Jackie, Darlene, Becky and D.J. – grapples with parenthood, dating, an unexpected pregnancy, financial pressures, aging and in-laws in working-class America. Through it all, the fights, the coupon cutting, the hand-me-downs, the breakdowns – with love, humor and perseverance, the family prevails.”

In a joint statement, Goodman, Metcalf, Gilbert, Goranson and Fishman said: “We have received a tremendous amount of support from fans of our show, and it’s clear that these characters not only have a place in our hearts, but in the hearts and homes of our audience. We all came back last season because we wanted to tell stories about the challenges facing a working-class family today. We are so happy to have the opportunity to return with the cast and crew to continue to share those stories through love and laughter.”

Added ABC, in another statement: “The Conners’ stories demonstrate that families can always find common ground through conversation, laughter and love. The spinoff will continue to portray contemporary issues that are as relevant today as they were 30 years ago.” Ultimately, the news is good for the show’s cast and crew, who were somewhat blindsided by Barr’s Tweet and ABC’s swift move to cut ties. (Although, as many have noted, Barr’s been a controversial figure for some time, and many observers had predicted such a meltdown.) Now, the workers involved with the show will still have paychecks — as long as the revised show continues.

The decision to relaunch as “The Conners” is reminiscent of how NBC handled the departure of Valerie Harper from its 1980s sitcom “Valerie,” over a contract dispute. That show continued (and added Sandy Duncan in a key role) as first “Valerie’s Family,” and then “The Hogan Family.”

The “Roseanne” cancellation was sure to come up this summer when ABC execs met with reporters at the Summer TV Critics Association press tour, and even as the fall TV season got underway. But with the fast-moving news cycle these days, the “Roseanne” controversy has already been replaced by several more since then. ABC runs the risk of dredging up a conversation that it had mostly put to bed. Disney execs likely considered this, but perhaps decided it could weather another storm — perhaps figuring that a new round of debate is outweighed by the financial benefit of keeping a version of “Roseanne” on the air.

The decision to cancel “Roseanne’ came after Barr had made plenty of unhinged and offensive statements in the past, but her racist attack last month on former Obama advisor Valerie Jarrett became the final straw for Disney. On Twitter, Barr wrote that “Muslim Brotherhood and Planet of the Apes had a baby,” and it was Jarrett.

When Barr first wrote her Tweet last month, ABC Entertainment president Channing Dungey was lauded for the quick move. “Roseanne’s Twitter statement is abhorrent, repugnant and inconsistent with our values, and we have decided to cancel her show,” she wrote in a statement at the time.

It was a tremendous move by ABC, given how much “Roseanne” had once again become a moneymaker for Disney and ABC. The show promised to pull tremendous ad dollars in the fall, when it was scheduled to air in the Tuesday 8 p.m. lead-off slot.

Following the cancellation, all “Roseanne” repeats were pulled from ABC, and Emmy For Your Consideration campaign plans for the show were halted. (It was still submitted, however, and remains eligible for Emmy nominations).

Dungey had full support of Disney CEO Bob Iger, who knew Barr well from battling with her in the late 1980s and early 1990s at ABC. “There was only one thing to do here, and that was the right thing,” Iger wrote on Twitter.

Werner also supported “ABC’s decision to cancel the show in the wake of Roseanne Barr’s most recent reprehensible tweets. Our goal was to promote constructive discussion about the issues that divide us. It represented the work of hundreds of talented people. I hope the good work done is not totally eclipsed by these abhorrent and offensive comments, and that Roseanne seeks the help she so clearly needs.”

Also at the time, executive producer Helford said in a statement, “On behalf of all the writers and producers, we worked incredibly hard to create an amazing show. I was personally horrified and saddened by the comments and in no way do they reflect the values of the people who worked so hard to make this the iconic show that it is.”

Now, Helford and company will at least be able to continue with that mission — albeit, without the iconic show’s iconic star.