The actress remains quiet on whether the show can be revived as "Darlene" or something else. 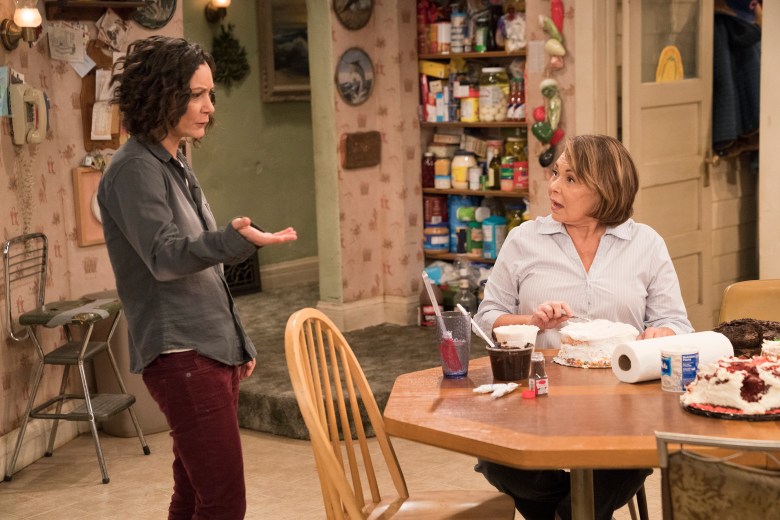 “Roseanne” star and executive producer Sara Gilbert has made her first on-air comments about the show’s cancellation, but remained mum on whether any attempts to salvage the show are moving forward.

“The Talk,” which also stars and is executive produced by Gilbert, aired pre-taped episodes last week — which means Monday’s live episode was her first chance to address the controversy over Roseanne Barr’s racist Tweet and the show’s subsequent cancellation. But Gilbert kept her comments short at the start of the show, before the panel quickly dropped the subject and moved on.

“The Talk” opened Monday’s show with host Julie Chen recounting the events of the previous week while Gilbert sat at the desk next to her. The crowd cheered as Gilbert’s statement was read.

Chen then asked Gilbert to elaborate, and she responded: “In addition to my statement, this has been a very difficult week. A lot of people have been hurt by this. I’m proud of the show we made. The show has always been about diversity, love and inclusion. It’s sad to see it end in this way

“I’m sad for the people who lost their jobs in the process,” she added, “however I do stand behind the decision that ABC made.”

Gilbert wasn’t asked about reports that she and the show’s other stars and producers are looking at ways to revive the show without Barr. But among the possibilities bandied about: Re-centering the show on Gilbert’s character, and calling it “Darlene.”

The “Roseanne” producers were said to be meeting with ABC over the possibility, but insiders note that ABC isn’t interested in any version of the show that would still require that Barr be paid as a producer.

Gilbert’s “The Talk” co-anchors also supported the move: “As a black woman who is a comedienne… I’m happy to see that it was done swiftly,” said Sheryl Underwood. Added Julie Chen: “Canceling the show so quickly sent a strong message and the right message.”

This Article is related to: Television and tagged Roseanne, Roseanne Barr, Sara Gilbert, The Talk