The Guy on CBS, The Lost Soul on NBC, and Conan O'Brien collaborate on an unprecedented late-night open. 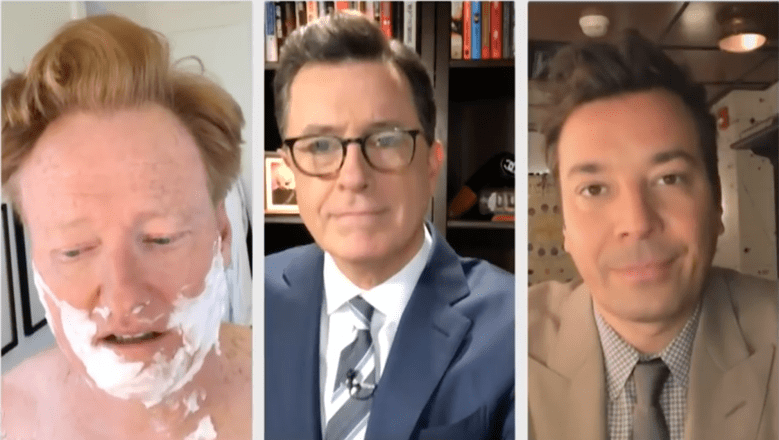 Donald Trump appears to have struck out in North Korea, given new reports that the country continues to upgrade the nuclear reactor it uses to fuel its weapons program. But alert the Nobel Price committee anyway, because he’s had much better luck bringing peace to another war zone: Late night.

After Trump took on both “Tonight Show” host Jimmy Fallon and “The Late Show” host Stephen Colbert — because, really, the leader of the free world has all the time in the world to take pot shots at talk show comedians — both had a little fun on Tuesday night in response.

Colbert, Fallon and Conan O’Brien participated in a joint segment that served as the cold open on both “Tonight” and “Late Show” — believed to be the first time the timeslot rivals aired the same opening bit. That’s a rare bit of collusion in the competitive late night space — where such an exchange would have been inconceivable in a different era. (Below, a tweet from “Tonight Show” producer Mike DiCenzo:

This might be a late-night first: @FallonTonight and @colbertlateshow will both be airing the SAME cold open tonight. So fun working on this together with Jimmy, Stephen, and Conan. #Lowlife #LostSoul https://t.co/tJCqzq3Cgu

But the decision here to join forces came after Trump took notice of an interview Fallon gave in which he admitted he regretted his decision to tussle the then-candidate’s hair on his show. “Be a man Jimmy!” Trump tweeted, to which Fallon responded on his show, “shouldn’t he have more important things to do? He’s the president of the United States!”

Then, on Monday at a South Carolina rally, Trump doubled down, calling Colbert (whom he called “the guy on CBS”) a “lowlife,” Fallon a “lost soul” and “Jimmy Kimmel Live’s” Jimmy Kimmel “terrible.”

The idea to team up may have originated with Colbert’s team, according to O’Brien, who told Variety that the “Late Show” team reached out to him early Tuesday.

The cold open started with Colbert answering a video call from Fallon, who quipped, “hey, lowlife,” with Colbert responding, “hey, lost soul!” Fallon noted that Trump called the hosts “all no talent, lowlifes, lost souls,” to which Colbert responded, “That’s not right. That’s Conan.” Enter O’Brien, who joined the call and jokingly acted surprise that Trump was president: “”The real estate guy who sells steaks? He’s president? How’s he doing?”

Said Colbert: “Not so good.”

Later in Colbert’s monologue, the host noted that Trump did have kind words to say about one talk show host: The late Johnny Carson. Colbert then ran a classic clip of Carson, joking about Trump having a “backup mistress.” Turns out Carson was ahead of his time, Colbert quipped.

Watch the full exchange below: