IndieWire investigates whether or not one of the main characters in "Suspiria" is Tilda Swinton or an elderly acting newcomer named Lutz Ebersdorf. 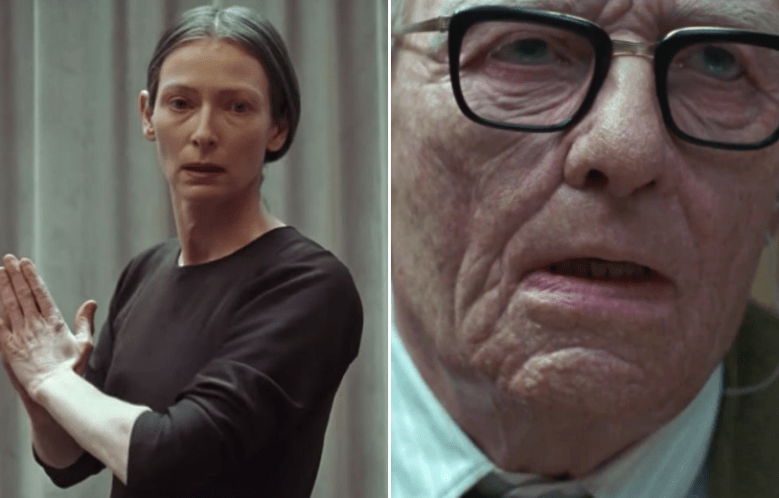 There are numerous questions “Suspiria” fans have about Luca Guadagnino’s upcoming adaptation of Dario Agrento’s horror classic: enat exactly is the dark mystery at the film’s center? How faithful is David Kajganich’s script to Argento’s original? But no question is as sizable as the one involving the mystery of Dr. Jozef Klemperer — and which actor is playing the character.

Amazon Studios’ official synopsis for “Suspiria” explains the film is about a “darkness at the center of a world-renowned dance company” — much like the 1977 original — that engulfs three characters: The troupe’s artistic director, an ambitious young dancer, and a grieving psychotherapist. The first two characters mentioned are Madame Blanc and Susie Bannion, played by Tilda Swinton and Dakota Johnson, respectively, but the third is more perplexing.

The film’s psychoanalyst is a character named Dr. Jozef Klemperer, but it’s unclear if the role is being played by an actor named “Lutz Ebersdorf” or, as early rumors and set photos suggested, Tilda Swinton in age-old makeup. A little sleuthing suggests the latter, but everyone involved in the movie has put a remarkable effort into playing along.

The official “Suspiria” casting list credits Ebersdorf as the actor playing Klemperer. The character is seen in the teaser trailer looking at a missing person poster of a young woman played by Chloë Grace Moretz. The relationship between Klemperer and Moretz’s character is unclear at this point. The fact Ebersdorf’s name appears on the film’s official poster (see below, where he receives fourth billing) would suggest this mystery isn’t one at all, but a Google search on Ebersdorf makes matters just a tad more suspicious.

Ebersdorf’s IMDb page includes only one photo (which, frankly, looks like a stock photo and bears little resemblance to the old man we see in the trailer). Plus, “Suspiria” is his only credit to date. His profile says he was born February 15, 1936 in Munich, Germany and is best known for co-founding the experimental theater group Piefke Versus, described as “a radical performance ensemble heavily influenced by the Vienna Actionists and in particular the work of Hermann Nitsch.” Ebersdorf’s bio also mentions he made several short art films, all of which are now lost, and pursued Kleinian psychoanalysis later in life. Aside from the fact Ebersdorf’s short films are conveniently nowhere to be found, there is no information about the theater group Piefke Versus anywhere online. It could be a clue the dance group is described as being influenced by Hermann Nitsch, an artist known for extreme works full of blood, demonic orgies, and bacchanalia (all things very “Suspiria”). Ebersdorf’s IMDb page is the only substantial piece of information about him that comes up when you Google his name. The actor has no agents listed on his IMDb profile, and his biography includes the note that it was written by Ebserdorf himself.

The plot thickens when you do a Google image search of Ebersdorf, which yields photos of Tilda Swinton. The actress made headlines in March 2017 when “Suspiria” set photos leaked featuring what looked to be the actress in age-old makeup. Swinton is no stranger to extreme cinematic transformations (see “The Grand Budapest Hotel,” not to mention “Orlando”). Several outlets, including PEOPLE, reported the actress was the old man on the set of “Suspiria.”

The early rumors about Swinton’s dramatic transformation led many to believe the actress was taking on two roles in the film: Madame Blanc and an elderly man. In an intriguing twist, the UK tabloid Mirror credited Swinton as playing a character named Lutz Ebersdorf at the time. It wasn’t until almost a year later that actor Ebersdorf entered the fold. Speaking at the BAFTAs earlier this year (via Yahoo), Guadagnino claimed the rumors Swinton was playing an older man were unfounded.

“That’s a complete fake news,” he said. “They made a picture of my actor Lutz Ebersdorf and they claimed it was Tilda in make-up. I don’t know why and I don’t know who.”

The film’s official billing — and Guadagnino’s statement — might suggest Ebersdorf will be making his screen debut in “Suspiria,” although the Swinton rumors and the complete lack of any information about Ebersdorf online imply otherwise. But if Guadagnino is lying, to what end? Does Swinton’s role as Klemperer constitute some kind of a spoiler?

In any case, assuming Ebersdorf is an invention, he wouldn’t be the first with a bonafide movie credit (see the Coen brothers and their editor “Roderick Jaynes,” who’s actually both of them). When asked by IndieWire to comment on Swinton’s possible two roles in the film, Swinton’s UK agent avoided the question of whether Swinton is playing Klemperer. Instead, the rep only confirmed what we already know: Swinton is starring as Madame Blanc. “I do not represent Lutz Ebersdorf,” he wrote, and referred us to “Suspiria” casting director and executive producer Stella Savino. She reiterated Guadagnino’s statement by telling IndieWire that Klemperer is in fact played by Lutz Ebersdorf.

“I confirm to you that Tilda Swinton has played the role of Madame Blanc, while the character of Dr. Klemperer has been played by Professor Lutz Ebersdorf, a psychoanalyst and not at all a professional actor,” Savino said an email. “I would add this is quite customary in Luca’s work. He likes, or better he adores to go in those directions and to work with real people that he loves to mix-up with professional and terrific actors, like Tilda is.”

According to Savino, Guadagnino “desperately wanted a real psychoanalyst” to play the role of Dr. Klemperer. She called the process of putting a non-actor like Ebersdorf in a main role a challenge, but referred to working with Ebersdorf as “amazing” and “kind of a privilege.”

So where is the guy? When pressed for additional information about Ebersdorf and a request for IndieWire to speak to Ebersdorf directly, Savino said Ebersdorf is remaining out of the spotlight despite being one of the film’s three lead characters.

“He’s an extremely private person who would prefer not to comment at this time,” Savino wrote. “We’ve promised him, no matter what, to do our best to protect his privacy; this was part of the deal we closed with him at the time.  I’m sure it will be easier to persuade him to grant some interviews when ‘Suspiria’ will be closer to the release date.”

To recap: Guadagnino and Savino say Swinton is not Ebersdorf. But Ebersdorf, by 21st century standards, barely exists — aside from a few questionable search results. Amazon Studios did not respond to IndieWire’s request for comment. In the meantime, IMDb might want to investigate the validity of a certain actor page. This Article is related to: Film and tagged Suspiria, Tilda Swinton