Regarded as one of the most visionary hours of TV this decade, "Part 8" of "The Return" ends on an image no "Twin Peaks" fan can forget. 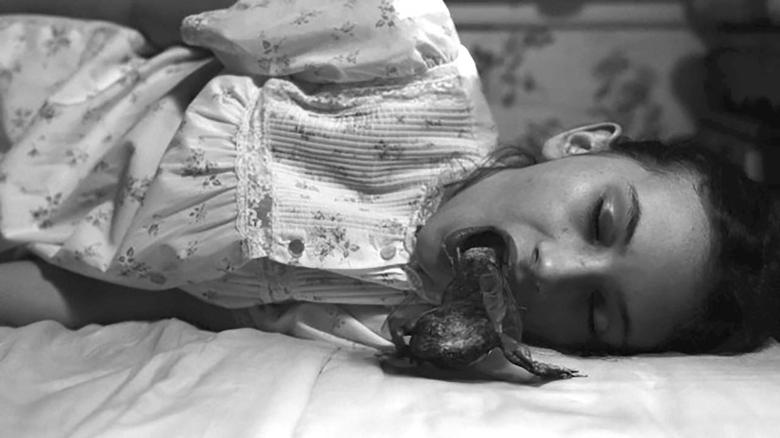 David Lynch almost never reveals his intentions behind specific directorial choices, but he does draw back the curtain a bit on “Twin Peaks: The Return” in his new book, “Room to Dream.” Lynch’s Showtime revival series was jam packed with provocative images, few as iconic as the final image from the acclaimed “Part 8.” The episode, which IndieWire named the best hour of TV in 2017, ends on the black-and-white shot of a young girl opening her mouth and swallowing a bug/frog-like creature.

In an excerpt from “Room to Dream” released by The New York Times, Lynch shines a light on where the idea for this memorable shot and creature came from. It turns out the shot was inspired by a vacation Lynch was on in which he traveled through Europe. The director was traveling on the Orient Express from Athens to Paris when the train stopped for a break and let people off in Yugoslavia. Lynch noticed numerous tourists all heading in the same director, so he followed them and made a discovery.

“They were going over to these canvas stalls with dim little lights, where they had these colored drinks — purple, green, yellow, blue, red — but it was just sugar water,” Lynch writes. “When I got off the train I stepped into this soft dust that was like eight inches deep and it was blowing, and out of the earth these huge moths, like frogs, were leaping up, and they’d fly and flip and go back down again. So that was the frog-moth — things just sort of show up in the world of ‘Twin Peaks.'”

Lynch didn’t know at the time while he was in Yugoslavia that the frog moths would make their way into his work, but it was an image that stayed lodged into his brain and reemerged as he was writing “Part 8.” The director ends his reveal at the anecdote and doesn’t go into any further specifics about the meaning behind “Part 8,” credited as one of the most abstract hours in Lynch’s entire career.

“Everybody has theories about what the show is about, which is great, and it wouldn’t matter if I explained my theory,” Lynch writes. “Things have harmonics, and if you’re true to an idea as much as you can be, then the harmonics will be there and they’ll be truthful even though they may be abstract. You could come back in ten years and see it in a completely different way, and you may see more in it — that potential is there if you’ve been true to that original idea.”

“Room to Dream,” written by Lynch and Kristine McKenna, is now available for pre-order and goes on sale June 19.

This Article is related to: Television and tagged David Lynch, Twin Peaks, twin peaks: the return