Plus, Moira Walley-Beckett spoke to IndieWire about how adding people of color was always her master plan. 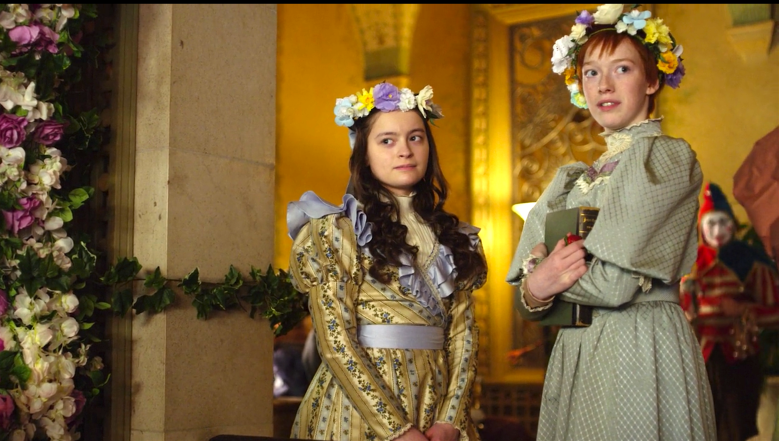 Delila Bela and Amybeth McNulty, “Anne With an E”

Besides the queer storylines, “Anne With an E” also broke from canon by introducing the first black characters ever in any “Anne of Green Gables” adaptation. Anne’s friend Gilbert Blythe (Lucas Jade Zumann) takes a job on a steamship and befriends Sebastian “Bash” Lacroix (Dalmar Abuzeid), who is originally from Trinidad.

“I’ve had a master plan since I embarked upon this adaptation, because I’ve always been super uncomfortable with the fact that this is a very, very white world, and it doesn’t reflect the reality of Canada’s diversity then and now,” said Walley-Beckett. “I knew that I wanted to send Gilbert on an epic journey and that when his father died, and his father gives him the advice of, ‘Travel the world. Don’t let your life be small,’ that Gilbert takes it to heart when he’s left really with nothing, except this piece of property that he’s not even sure that he wants.

“I knew that I would send him away to some sort of exotic port of call where he could see a much more colorful world and a fresh and bigger perspective of the world. So that happens, poised and on the brink of that at the end of Season 1. For Season 2 I was like, ‘Great, who’s it going to be? Who’s he going to meet?’ I want him to have a friend, I want the friend to be a person of color, and I want them to travel together, and ultimately I want this friend to return to Avonlea. And so we conceived of Bash from Trinidad.” 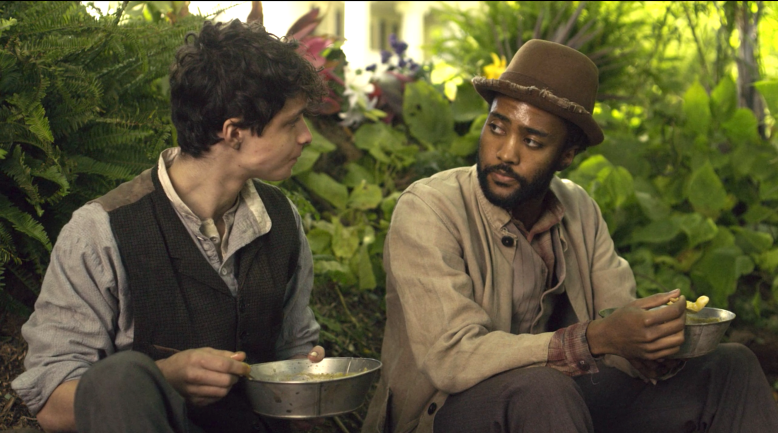 Even though the two work side by side, Gilbert learns more about the world through Bash than he’s known all of his life. Not only are the sights, smells, and tastes in Trinidad beyond his imagination, but Gilbert learns just how privileged he is when Bash warns him not to anger their steamship supervisor. “This is all I have. I’ve got nothing, this is it for me, and there ain’t nothing for me on dry land. You’re a white boy, you’ve got options. You’re a tourist. I need this. Don’t lose this work for me, understand?” Later, Gilbert uses his privilege to help Bash by giving him options by adding Bash to his land’s deed, thus making him an equal partner in the farm in Avonlea.

Bash is the vehicle to explore intolerance and inequality, even more when he goes to The Bog, when he learns that other black people live there.

“The Bog is the community that’s just outside of Charlottetown, where people of color were marginalized and had their own community there,” said Walley-Beckett. “That was a thrilling and devastating discovery. I’m Canadian, and I didn’t know about that, so we were very excited to bring that to everybody’s attention, and incorporate it seamlessly into the themes that we were exploring this season.”

Making their own transformations are Anne’s adoptive parents, siblings Marilla and Matthew Cuthbert (Geraldine James, R.H. Thomson). While Matthew becomes less shy –  as seen when he performs in the Christmas pantomime, confronts his old flame, and later speaks up at the town hall – Marilla takes a path to evolve her concept of what a woman’s role can be. Whether she’s trying a new hairstyle to catch the eye of the lodger Nate (Taras Lavren) or defending the revolutionary new schoolteacher Miss Stacy (Joanna Douglas), Marilla seems to have awakened from stasis and is changing with the world around her. 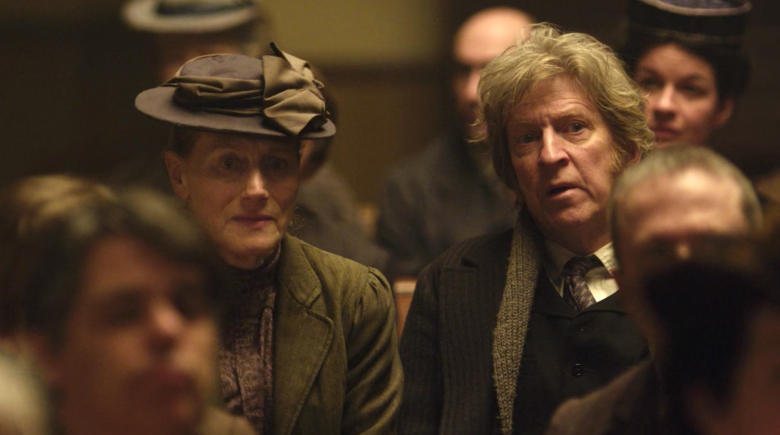 “She’s like a Russian doll to me, and I find her the most fascinating of all the characters because there’s so much inside her that hasn’t ever had an opportunity to come out. So I peel the layers away and reveal each little doll very carefully, and very incrementally, much to Geraldine James’ chagrin because she’s a masterful thespian who can be incredibly emotional,” said Walley-Beckett.

“All the notes with her is, ‘Nope, nope. Shut it down, shut it down. We’ll keep a very tight rein on Marilla.’ So this season we have some lovely the opportunities to let Marilla unfurl a little bit as she moves into learning how to be a mother,” she said. “Having this handsome virile young man in the house is very disconcerting. Something that I found really charming is that we are always exactly who we are on the inside, and she’s still young Marilla on the inside. I really liked that she is still flummoxed in the presence of this man that it sort of starts to permeate her thinking until that situation disappears.

“And like the Tin Man with the oil, that allows for a little bit of growth for the character over the course of the season,” she added. “Because of their relationship with Anne, and being confronted by all things Anne, an ‘Anne-ness,’ they have to grow, and they have to explore themselves… It also afforded Marilla an opportunity to examine, ‘What other possibilities are there?’ And ultimately the overarching theme of the season, which is, ‘Different isn’t bad; it’s just not the same.’ That’s what Anne says.” 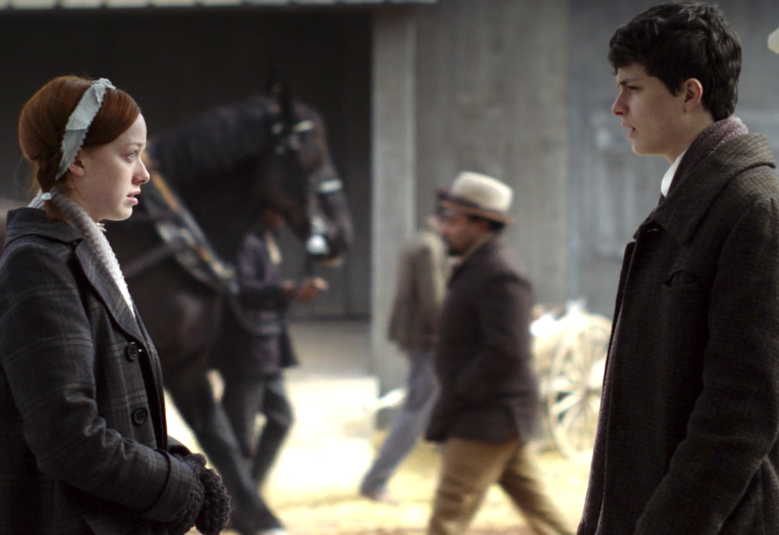 “I think my focus in Season 3, because the kids are going to [grow], when we’re going to come back, we’re going to jump a little bit more time,” Walley-Beckett said. “I’ve always got a bazillion ideas, but Amybeth who plays Anne will be 16 about to turn 17, so I’m going to jump ahead, so there’s much more avenue for romance and other adventures.”

Fans of Lucy Maud Montgomery’s “Anne” novels know that Anne and Gilbert have had “made for each other” chemistry from the start, but the person whom Diana ends up with in the books has yet to appear in the TV series. Part of the strategy to advance the characters’ ages significantly may have to do with the actors themselves, who are growing rapidly. The biggest difference can be seen in Aymeric Jett Montaz, who plays the Cuthberts’ hired hand, Jerry. In Season 1 he’s shorter than Anne, but this season, he shot up and towers over her.

“Seven inches he grew. Amybeth was so aggravated,” said Walley-Beckett. “I love that Jerry is just so impenetrable. It’s very hard to get under his skin, which I think is sort of extra maddening for Anne. She’s always like six beats ahead of him. I love their ‘Bickersons’ [dynamic], but I will say there are little tiny moments here when she sort of sees him differently for a second at the end of the bad guy arc. She wants to teach him to read, so their friendship is forming.

“I always thought that I wanted to include him because the character Jerry is just one sentence in the book. He’s never referred to again, and I always thought he’d be a pretty terrific foil for Gilbert and anybody else who came along. He’s clearly extremely fond of Anne and he’s also extremely attracted to Diana, so we’ll see what happens.” 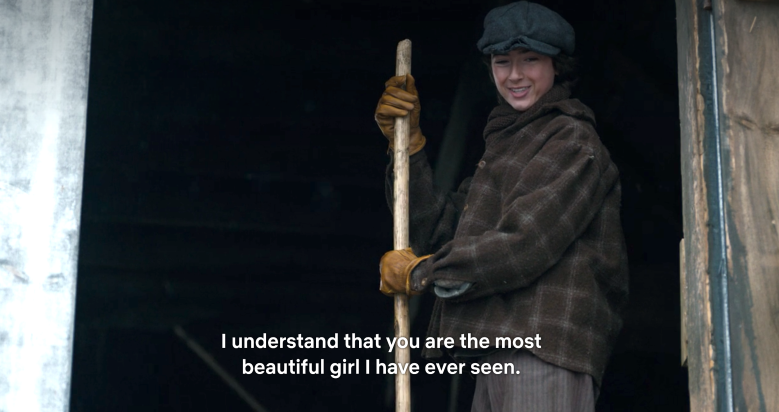 “Anne With an E” Season 2 is currently streaming on Netflix.

This Article is related to: Television and tagged Anne with an E, Moira Walley-Beckett, Netflix