Dean has evolved to fit right in with the crazy, colorful, and heartfelt TNT drama. 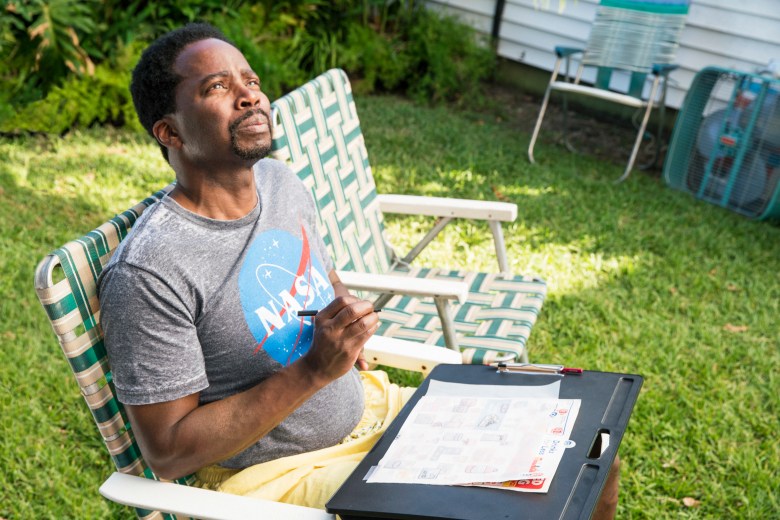 The sweet and good-natured character Dean Simms has become of the breakouts on “Claws,” which is no mean feat for a show filled with flamboyant mafia bosses, drug dealers, ex-cons, and ex-prostitutes. But even if he has a stronger moral compass than that others, Dean is anything but boring.

Dean, portrayed by Harold Perrineau (“Lost,” “Sons of Anarchy”), has had perhaps the biggest character evolution on the TNT series so far. First introduced as a budding artist with autism who is completely dependent on his sister Desna (Niecy Nash), he’s become far more than a mere appendage to her life. Dean has created a much richer and more independent existence for himself that involves romancing his girlfriend Virginia (Karrueche Tran), moving in with her, and preparing to become an exotic dancer. But more importantly, he’s also become a man who can finally watch out for his sister after decades of having her care for him.

“It was really nice to see this relationship between Desna and Dean,” Perrineau said, explaining why he was first drawn to the character. “I felt like Dean was really in support of her because so much crazy was going on in her life. I thought that was really sweet. I have a cousin who raised her brother from the time that they were kids until he passed in his 40s. I’ve just never seen that before on television; I’ve seen it in life. That kind of loving someone like that, that really appealed to me.” 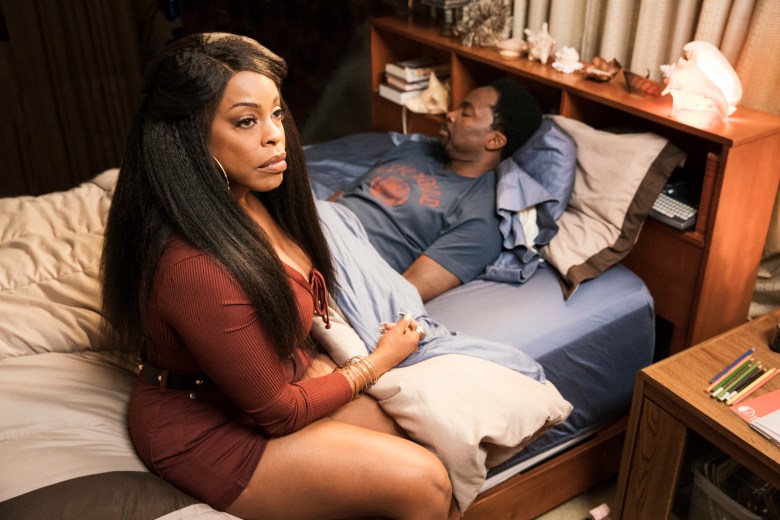 “Also, I know that we love to see things that are violent and horror movies and terrible things happening all over,” he said. “It makes us excited, it makes us feel better about our life, but I’m also really glad when there are representations of love. I love watching people do good things with each other. That was really appealing to me, their relationship. It just felt nice in the midst of a lot of crazy. I like nice, what can I say?”

On Sunday’s episode, “Double Dutch,” Desna spirals into despair after learning that her hunky doctor fiancé Gregory Ruval (Jimmy Jean-Louis) and her Russian mafia boss Zlata Ostrovsky (Franka Potente) have been playing her all along. The betrayal stings to the point where Desna heads to their childhood mentor Mrs. Wallace (Aloma Wright), who once cared for her and Dean. Throughout this trip down memory lane, Dean supports Desna but also offers her advice on how to bounce back.

“Although Mrs. Wallace helps Desna figure out that she always had the power, I think Dean has been saying it all along too,” said Janine Sherman Barrois, who wrote Sunday’s episode. “‘You’ve always had the power, you just need to not make such bad choices.’ And if you see this through this season, you will see that Dean is literally the one calling Desna out on herself. He is the barometer of, ‘Let’s be real. You are in this because you keep doing these things. You should know better.’ She just needed his help to hold up a mirror to her to remember who she was. I think he does a great job at that. Even when she is running in the water, I think he is the rock. He is literally pulling her back in saying, ‘It’s going to be okay. You’re going to be okay. We’re going to be okay.’”

Dean’s maturity and agency are represented in one key scene in the episode. At their old middle school, Dean finds an action figure that he had hidden in the hollow of a tree. But when Desna tells him to climb down and bring the G.I. Joe with him, he responds, “I don’t need it anymore, Des. It belongs here.”

In this way, he literally puts away childish things this season. “Dean is feeling more empowered about taking care of himself out in the world, where before hiding was better… hiding in a tree was better,” Perrineau said. “Now he’s got Virginia and a job and he’s certainly feeling more empowered. That’s one of those things I learned at that school [for students with autism]. Empowering people to feel like they can handle their own lives, and then actually handling their own life, that’s a lot because there’s so many years where you’re so needy… Those things are really beautiful because you get this idea of this progression. He’s in this place where he’s making the choices. Desna doesn’t have to make them for him. Mrs. Wallace doesn’t have to make them. He’s making choices and he’s happy about them.”

Series creator Eliot Laurence hadn’t initially planned for Dean to be on the spectrum. “I had the character before I had my diagnosis. So I kind of knew Dean and watched him in my head and knew his characteristics and then sort of had to figure out what was going on with him,” he said in an interview with IndieWire. “Once I started doing some research it really seemed like he was on the spectrum. I just started with the person and then sort of filled it in backwards.”

While the show’s producers and writers contacted various organizations to learn more about the ways a person with autism could be portrayed, Perrineau also did his share of research. He began by watching Amythest Schaber’s YouTube series “Ask an Autistic,” spoke to a doctor who works with patients with autism, and observed family friends’ children who were on the spectrum. The more their collective knowledge grew, the more Dean was able to grow as a character befitting a crazy and colorful show like “Claws.”

“Originally, he wasn’t so verbal,” Perrineau said. “The way that he communicated was through the coughing or the waving or you see him pointing to himself, so that Desna could tell something was wrong with him or right with him,” he said. “Then they started adding on more language but I had to keep those things because we had already set them.” 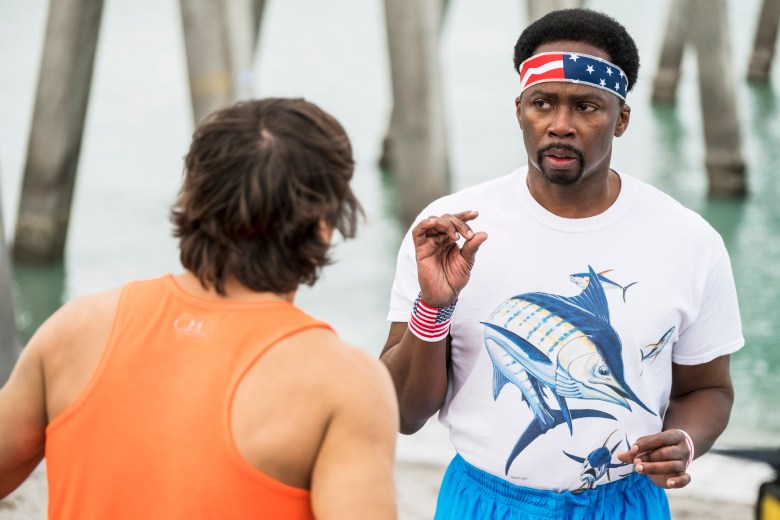 “We found out that he was abused and so how those things manifest in the way that you respond to people and stuff like that,” he said. “I have a couple of scenes that still make me really emotional when I think about them. One is when Dean is explaining what the Coombs have done to him. And then he involuntarily urinates on himself and then he immediately has to respond to that. That still makes me really really emotional.”

Laurence added, “We just try to be really sensitive and give it a lot of thought. Harold is such a fine artist. He has a lot to say about it. So we’re always in dialogue with him about what feels too much or not enough or accurate or safe or too safe or too dangerous. When we finally land on something, we feel good and we feel like it’s been investigated fully and vetted and tested against our guts and our hearts.”

“The biggest challenge is how to stay as authentic as possible and never make fun of Dean,” Perrineau said. “That’s always a challenge because it is a dark comedy and there are lots of things that are fun and lots of funny things and lots of political things.”

Part of Dean’s humorous scenes come from his relationship with Virginia, a nail tech who works at Desna’s salon. They began a flirtation last season that resulted in them sleeping together while on a road trip. This season, Virginia has agreed to marry Dean and they move in together.

“I watched this movie called ‘Autism in Love.’ It’s a documentary of autistic people finding their way through relationships,” said Perrineau. “Without making the characters these cliches, you get to see him really try to navigate this very difficult thing whether you’re on the spectrum or not. I think it’s a great way for the audience to see people navigate a little differently than they might navigate.”

Through Perrineau’s research, the actor occasionally inspires the writers to pursue specific storylines. This season, Polly (Carrie Preston) becomes the dance instructor and then madam to the all-male revue of exotic dancers at the revamped club. Dean intended to join them and had been doing his own training, which he put on display in a recent episode.

“This year I went to this school where they have kids anywhere from the age of 10 to 22 who are making their way through the 12th grade. Then they have to figure out how they’re going to move on in life,” he said. “I spent a lot of time there talking to them and finding out what people’s aspirations were. I found out that if you’re autistic, the things that you want in the world are not different than if you’re not autistic. You want to find your place, you want to feel, and I remember telling that back to [the writers], and then this year they came up with the storyline of Dean wanting to do this stuff and I was like, ‘Wow, all right. Exotic dancing, okay.’”

Perrineau has a dance background, having trained at the Alvin Ailey American Dance Theater, joined various modern dance companies, and hoofed it on Broadway and off, all around the world.

“People were surprised that I knew how to dance, so I use that background. What we had to consider with Dean is his movements have been kind of choreographed,” he said. “The way that Dean moves has been really throughout [the show], and so how would we contrast it with his dancing on stage? Then we just decided to just go for it, that maybe it’s just the place where he excels… but we weren’t doing grand jetes across the floor, but I gave him some real actual movements and stuff that you might see in videos or stuff like that, that he may have seen before and mimicked and thought was kind of interesting in his world of exotic dancing, not stripping.”

Dean is our whole weekend mood—supercharged with the super moves⚡ Catch up on #ClawsTNT NOW on the @TNTDrama App or On Demand! https://t.co/XCH8Oe3pL5 pic.twitter.com/wM26vi4DIj

Like the glamorous, eye-popping nail art featured on “Claws,” the show is not known for its subtle, muted tones. And if Dean is going to be an exotic dancer, he needs the plumage to match.

“The show is Technicolor, like the costumes and the clothes and the colors,” said Perrineau. “Every one of those things we have to talk about. Often times I get into a costume and I’m like, ‘Okay, let’s talk about this one. How do I do this to make it make sense?’”

“I got a bunch of choices and yeah, we talked about it a lot. We made some choices that would look realistic in that club setting,” he said. “I went on a stupid diet and I did all this stuff. There’s no way I could be buff like those dudes that were there, but – again, you don’t want it to look like a joke, you don’t want to see middle-aged fat Harold in there trying to dance – but you do want to see somebody that you might want to throw money at.”

This Article is related to: Television and tagged Claws, Harold Perrineau, TNT