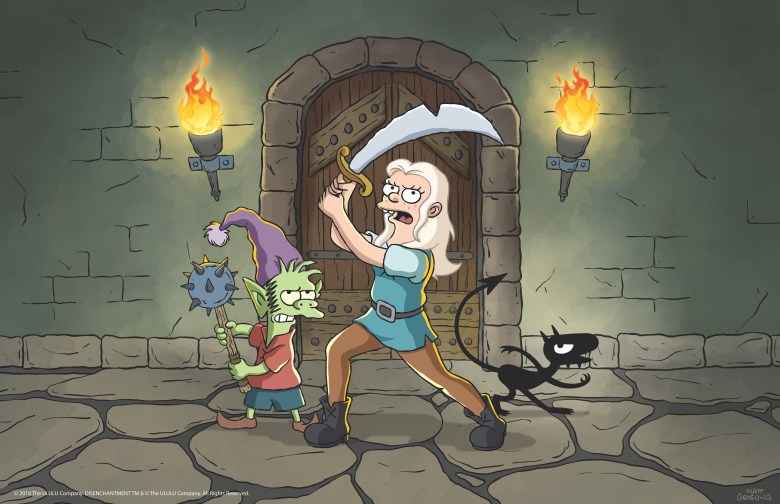 Abbi Jacobson, Eric Andre and Nat Faxon are front and center as the voices of “Disenchantment,” Matt Groening’s new series coming to Netflix on August 17. The show centers on the kingdom of Dreamland, where young princess Bean (Abbi Jacobson) is forced to marry against her will — and teams up with feisty elf Elfo (Faxon) and personal demon Luci (Andre) to escape. Along the way, the oddball trio will encounter ogres, sprites, harpies, imps, trolls, walruses, and lots of human fools.

Bean – full name Princess Tiabeanie – is Dreamland’s hard-drinking,19- year-old princess, daughter of King Zøg and dearly missed Queen Dagmar, who died when Bean was little. Growing up in this crumbling patriarchal kingdom, Bean knows she’ll never be allowed to rule (though she’s far more capable than her half-brother Derek) and yearns to experience the outside world and find her place in it.

Luci is Bean’s personal demon who Bean gets cursed with as a mysterious present from a mysterious faraway source for mysterious reasons. Like Bean and Elfo, Luci’s a relatively young demon (though he could already be thousands of years old) and Bean is his first assignment. What could possibly go wrong as he tries to steer Bean toward the darkness?

Elfo is an 18-year-old elf from the sheltered, hidden world of Elfwood. Even though he’s upbeat, optimistic, and extremely knowledgeable of candy, he’s always felt a little different from the other elves, and he leaves Elfwood in search of the big life he’s been missing.

The World of “Dreamland”

KING ZØG (JohnDiMaggio) — King Zøg is Bean’s father and the ruler of Dreamland, who lords over his domain with bluster and the occasional flying scepter. Though he doles out justice by dropping people through a trapdoor to the ocean, he has a soft spot for his daughter Bean and his late wife, Dagmar.

QUEEN OONA (Tress MacNeille) — Queen Oona is King Zøg’s second (and current) wife and Bean’s stepmother. A native of the nearby kingdom of Dankmire and an amphibian, she married Zøg to forge an alliance between their two kingdoms. Shortly after their marriage, she gave birth to Derek – who, because he’s male – is the heir apparent of Dreamland. Bean has never gotten close to Oona and views her as an evil stepmother. But there is more to Oona than meets the eye.

PRINCE DEREK (Tress MacNeille) — The twelve-year-old son of Zøg and Oona and Bean’s half-brother. A sweet and trusting kid who may actually be very smart – only time will tell. Bean’s always been annoyed by him (and the idea that he’ll get to rule for no good reason) but he could be an important ally for her. His nerdish interests are more likely to appeal to Elfo, however. Prone to getting locked away in the tower at the sign of any trouble.

SORCERIO (Billy West) — Sorcerio is an unimpressive and self-named wizard who serves as an advisor to King Zøg. His “magical powers” consist mostly of card tricks but he longs to discover real magic. He and Odval have been a couple for a long time.

ODVAL(Maurice LaMarche) — The Prime Minister of Dreamland and KingZøg’s most trusted advisor. A somewhat dour and serious man, Odval always keeps at least one of his three eyes firmly on the task of running the kingdom. He has a (probably justified) low opinion of just about everyone except for his friend Sorcerio, and is a frequent foil for Bean. Like many in Dreamland, he has a mysterious and tragic background we will eventually learn about.

THE HERALD (David Herman) — The source for all the news in Dreamland, the Herald walks the streets of the village and the halls of the castle calling out the latest headlines, maintaining his dignity no matter how ridiculous those headlines get. It is also his job to announce all arrivals at the castle.

PRINCE MERKIMER (Matt Berry) — Merkimer is the loutish prince from the nearby kingdom of Bentwood. Set to marry Bean (after Bean accidentally kills Merkimer’s older brother, Guysbert (David Herman)), he is turned into a pig before the “I do’s”. Faced with being a pig from now on, Merkimer must learn to navigate life without the supposed good looks and riches he once had. Waiting around Dreamland for a cure to his curse, Merkimer could become an unlikely friend and ally to our main Trio of Bean, Elfo and Luci. But that’ll take some time.

STAN THE EXECUTIONER (Noel Fielding) — Stan is the soft-spoken, friendly Executioner and Manager of the Torture Chamber of Dreamland. He teaches Bean his trade and encourages her natural talents. He’s married to Bunty and together, they’re raising a household full of children.

BUNTY (Lucy Montgomery) — Bunty is Bean’s overworked and under-appreciated lady-in-waiting. When she’s not cleaning up Bean’s messes, she’s taking care of her own family of with her husband Stan.

CLOYD and the ENCHANTRESS (Rich Fulcher and Lucy Montgomery) — Mysterious figures from a faraway kingdom, they seem to take great interest in Bean’s progress and may be the ones responsible for sending Luci to Bean as a wedding gift.

VIP and VAP (Novoices) — King Zøg’s silent (for now!) cape-bearers, they are seen walking dutifully behind Zøg at all formal occasions.

THE JESTER (Billy West) — Always ready with a joke that probably won’t amuse King Zøg, the Jester is more known for his catchphrase “Oh no!” which he utters as he’s being tossed out windows or dropped through the trapdoor in the throne room that leads to the ocean.

PENDERGAST (Eric André) — The Head Knight of Dreamland and, as such, the long-suffering warrior who must put up with Zøg’s unusual quests and demands. His junior knights, Turbish (Rich Fulcher) and Mertz (Billy West) rarely help the situation.

THE FAIRY (Tress MacNeille) — Not the typical storybook magical fairy, but she has been around enough to know what’s what. A good source of world-weary wisdom for Bean and others willing to listen.

POPS THE ELF (Billy West) — Elfo’s dad. Well-meaning and good-hearted, Pops knows a secret about Elfo he’s reluctant to tell. Pops has an interesting secret himself.

KISSY THE ELF (Jeny Batten) — Elfo’s close friend and co-worker on the candy line in Elfwood. Like Elfo, she knows there’s more to the sugary and somewhat insipid sweetness of Elfwood and also longs for something new.

This Article is related to: Television and tagged Disenchantment, Matt Groening, Netflix, TCA