The first great comedy special of the MeToo era introduces the world to the tea-sipping Australian lesbian who could heal us all. 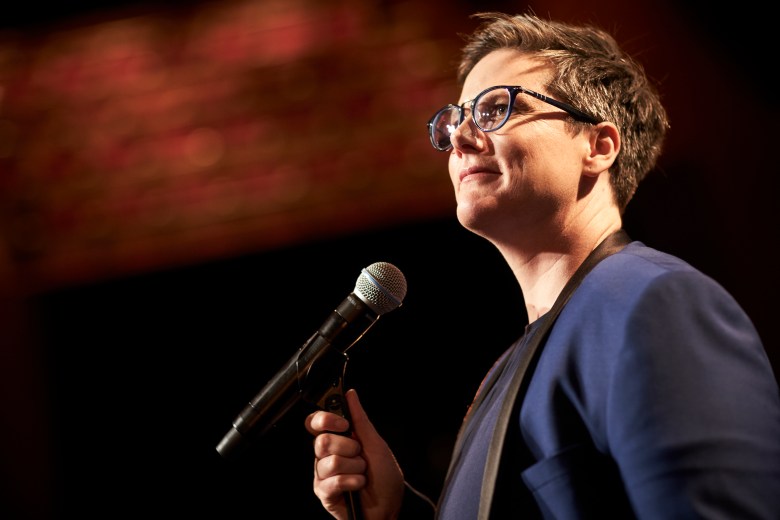 In “Nanette,” Hannah Gadsby asks, “Where are the quiet gays supposed to go?” It’s clear Gadsby is not a quiet gay. By the end of her rousing hour-long soliloquy, she’s ranged from the design flaws of the gay flag to Pablo Picasso’s misogyny, and contends that her favorite sound in the world is that of “a teacup finding its place on a saucer.” However, I suspect it may actually be the sound of the thunderous applause that erupts after her artful lambasting of a celebrity culture that prizes bad men over everyone else.

To men, particularly straight white men, she says: “‘Pull your socks up.’ How’s that for humiliation? Fashion advice from a lesbian, and that’s your last joke.” The moment comes just before Gadsby winds up for the home stretch, a poetic takedown of a cult of celebrity, rooted in sexism, that led to an admitted sexual predator living in The White House. “Nanette” is biting social satire painted with the glossy finish of a Netflix comedy special.

In the month before “Nanette” premiered, Gadsby performed it live at the SoHo Playhouse in New York City. The show was fervently recommended to me by at least four people in that time, all of them queer women. Since debuting on Netflix last month, a similar word of mouth recommendation has trickled down from queer women to comedians to the general population. Why is everyone talking about this tea-sipping Australian lesbian who loves pride but hates a parade?

She discusses gender nonconformity in a way no other mainstream comedian has.

Among women comedian, the ratio of lesbians to straight women is far higher than in the general population. (Think Ellen DeGeneres, Wanda Sykes, Tig Notaro, Rosie O’Donnell, Sandra Bernhard, and Kate McKinnon). But none have been as frank about their experiences with gender-nonconformity as Gadsby is in “Nanette.”

Of life in her Tasmanian small town, she says: “I had to leave as soon as I found out I was a little bit lesbian. And you do find out, don’t you? I got a letter. Dear sir/madam.” On the reaction of people when they realize she’s a woman, she says: “I get a lot of side eye.” Though she is quick to point out why she loves being mistaken for a man: “Just for a few seconds, life gets a whole lot easier!”

Gadsby has a slew of words to describe herself, whether it’s “Sir/madam,” “gender not-normal” (her alternative: “gender normal”), “this situation,” or the more-common “masculine of center.” It’s important to hear someone use so many different words to describe herself, though she is adamant that she is not trans, despite one very nosy fan insisting she come out as such. There is so much hesitation and confusion around the language of gender, with each person varying in their preferred pronouns and labels. Gadsby offers options, both for herself and for those who would describe her, establishing her identity and an ambivalent fluidity at the same time.

She probes the dark side of self-deprecating humor.

Gadsby begins “Nanette” stating that she is quitting comedy, an odd assertion from someone on the brink of international acclaim. “I have a built a career out of self-deprecating humor, and I don’t want to do that anymore,” she says. “Because do you understand what self-deprecation means from somebody who’s already exists in the margins? It’s not humility. It’s humiliation. I put myself down in order to speak, in order to seek permission to speak. And I simply will not do that anymore. Not to myself, or to anybody who identifies with me.”

It’s one of the first major applause lines in the special, though there are more to follow. Comedians will tell you nobody hates themselves more than comedians; as the hardest job in show business it’s a masochistic endeavor. Maybe that’s why when Gadsby “comes out,” it’s to say, “I identify as tired.”

She firmly believes that we cannot separate the art from the artist.

“Nanette” may go down in history as the first truly post-MeToo comedy special. With a fiery passion, Gadsby explains how Pablo Picasso slept with a 17-year-old girl, and why that’s all she needs to know. “Picasso suffered the mental illness of misogyny,” she says. Then, she lists Hollywood’s most powerful known abusers. “Donald Trump. Pablo Picasso. Harvey Weinstein. Bill Cosby. Woody Allen. Roman Polanski,” she says.

Gadsby says what most people in Hollywood are afraid to say: Cancel them all. No amount of art is worth even one person’s lifetime of healing from trauma. Movies are more than just entertainment, they are our mirror, the stories we watch are the stories we play out in our own lives. And by excusing one sexual predator, we excuse them all. Gadsby was relatively unknown in the U.S. before “Nanette.” She has very little to lose by calling out these men. It is precisely Gadsby’s status as an outsider — an Australian, a lesbian, a “gender not-normal,” a woman who does not look like the ideal woman — that frees her to make such a searing critique. It is up to us to listen.

This Article is related to: Television and tagged Hannah Gadsby, Nanette, Netflix