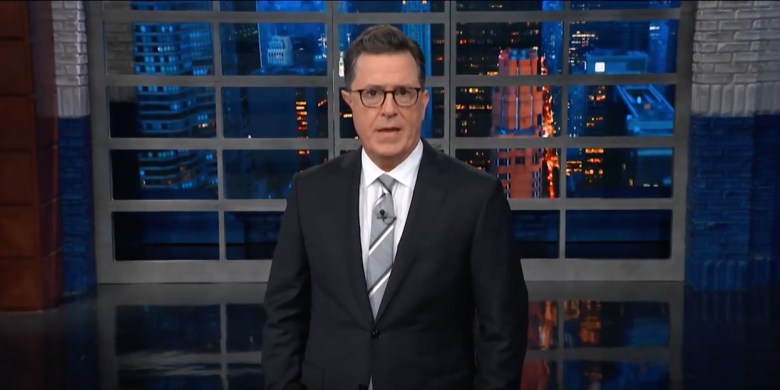 “The Late Show With Stephen Colbert”

The news moves fast these days. On late Friday afternoon, Leslie Moonves, president and CEO of CBS, was accused of sexual harassment in an investigation published by The New Yorker. The article was written by Ronan Farrow, the journalist behind last fall’s Pulitzer Prize–winning story about Harvey Weinstein’s sexual abuse, and is the latest expose to investigate the behavior of a powerful man in the entertainment industry.

By Monday morning, the CBS board had convened and decided to keep Moonves in his position, while also launching an “outside investigation” into his behavior. By Monday night, CBS’s own late night crown jewel, “The Late Show With Stephen Colbert,” had to provide its own response to the news, with host Colbert kicking off with some humor in his monologue, before pushing into a more serious take on the latest.

After his monologue, however, Colbert turned more serious. When the show returned from its first commercial break, Colbert was behind his desk.

Colbert continued, “Everybody believes in accountability, until it’s their guy. And, make no mistake: Les Moonves is my guy. He hired me to sit in this chair. He stood behind this show while we were struggling to find our voice. He gave us the time and resources to succeed, and he has stood by us when people were mad at me. And I like working for him. But accountability is meaningless unless it’s for everybody, whether it’s the leader of the network, or the leader of the free world.”

You can watch Colbert’s monologue below.

This Article is related to: Television and tagged Les Moonves, Sexual Harassment, The Late Show with Stephen Colbert