Director Aislinn Clarke explains how her found footage horror film tackles one of the darkest period's in Ireland's history. 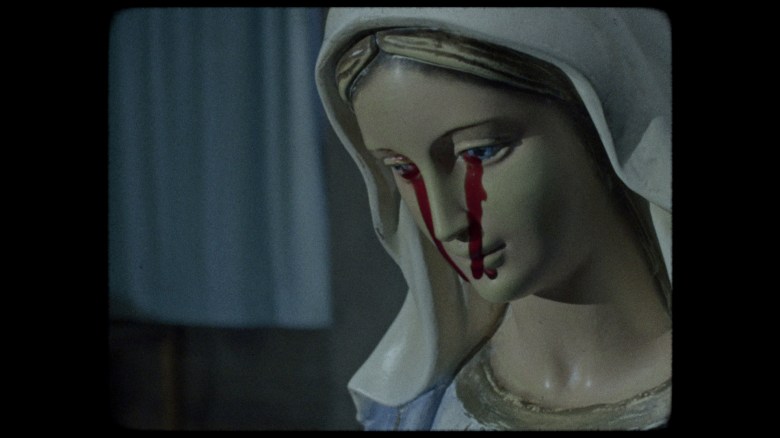 “The Devil’s Doorway” is earning a lot of buzz in the horror world for good reason. The film’s director, Aislinn Clarke, is the first women to helm a horror film in her native Northern Ireland. But apart from making history, Clarke also chose to mine one of Ireland’s darkest chapters for her debut: the Magdalene Laundries, where young women were sentenced to life sentences of hard labor for “loose morals” for nearly 250 years.

“The Devil’s Doorway” is a found-footage horror film that follows two priests, Father Thomas (Lalor Roddy) and Father John (Ciaran Flynn) who are sent to a Magdalene Laundry, a Catholic home for “troubled” young women, in Ireland to investigate the validity of a miraculous event — a Madonna statue that has begun weeping tears of blood. But once there, the priests discover a sinister evil has infected the home, dredging up dark secrets from the past that the nuns have tried desperately to cover up.

The film’s time period allowed Clarke to bring an update to the found-footage horror genre, which normally has a low-budget aesthetic to it. Instead, “The Devil’s Doorway” was filmed on 16mm film to mimic the type of handheld camera that Father John would have used to document the circumstances. As the entire film is captured this way, it alters the aspect ratio, giving “The Devil’s Doorway” an old home movie quality that lends it a sense of authenticity lacking in many found footage films.

Clarke chose the 1960’s as the setting for the film because it was during this period when these institutions were at the height of their powers in Ireland. But in an interview with IndieWire, Clarke was clear that the Magdalene Laundries had cast a very long shadow over Ireland, one that spanned until the mid-1990’s, and the effects of these places are still being felt today.

Read More:  5 Chilling Horror Movies To See This Summer, From ‘Hereditary’ to ‘Revenge’

“I had my son when I was 17, which was the year after the last Magdalene Laundry closed,” Clarke said. “People think these places existed a very long time ago, but that was 1997; the last one had closed in 1996. I was 17 and unmarried, I could have been in one if the circumstances has been different.”

Ireland’s history with Magdalene Laundries stretches back to 1765, when the first Church of Ireland run institution was opened in Dublin. The homes were essentially asylums, where innocent young women were sent by their families, doctors, priests, or even teachers, as a way to correct “loose morals.” The homes borrowed their name and inspiration from Mary Magdalene, the Biblical character who reformed after a life of prostitution. The “loose morals” of the girls sent there could mean anything from perceived promiscuity to prostitution. Young girls impregnated out of wedlock were sent to the homes, but also orphans and mentally disabled women.

The Laundries were supported by the state in Ireland, which was interwoven with the Irish Catholic Church. As Clarke explained, Laundries could be found all over the world in Catholic countries, including the U.S. and Canada, but they were especially powerful and sinister in Ireland due to the theocratic government. For young girls sent to the homes, there was no one to turn to for help. 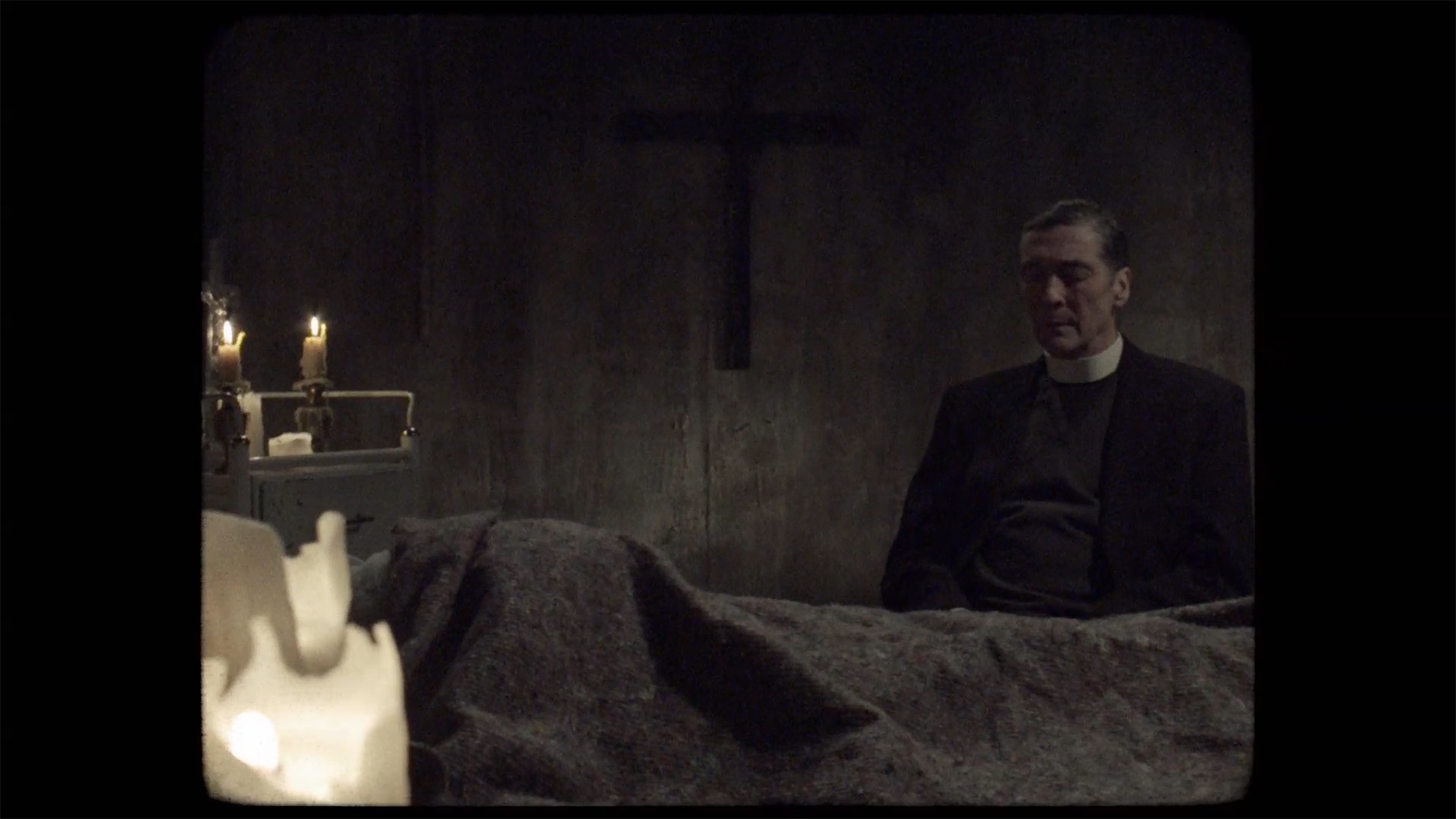 Lalor Roddy in “The Devil’s Doorway”

“Everyone knew,” Clarke said. “So you had no where to turn. Every person was complicit in a way, because everybody knew that they were there and what was happening. So girls could be plucked out of schools and sent to these places. That was the direct result of the Catholic Church apparatus, which created a situation where vulnerable people could be exploited for so long.”

The Laundries served as work homes, places where the girls would wash sheets, which also served a potent symbolic stand-in for their own penitent “washing” of perceived sins. The girls were often worked to the bone, struggling through longer hours than most factory workers had to bear. But despite the Laundries being for-profit institutions, the girls washed sheets for hospitals and hotels, and some more recent laundries even served as assembly lines for Hasbro games such as Mouse Trap. They were never paid for their labor.

The history and purpose of the Magdalene Laundries is inevitably interwoven with Ireland’s historic abortion referendum, in which 64% of the country voted to repeal the Constitutional amendment that made abortion illegal on May 25, 2018. That date happened to coincide with the world premiere of “The Devil’s Doorway,” which took place at the Seattle International Film Festival. For Clarke, the experience was a surreal one, especially as she wasn’t sure what the outcome of the vote would be.

“Ireland is historically a very religious, conservative country, so there was a great fear, it could’ve went either way,” she said. “When we came out of the screening, the numbers coming in showed that it was probably going to be a landslide for repeal, so it was really a landmark moment, and it was strange to have this on the screen in that period of time.”

As Ireland grapples with the potential for progressive motions like the abortion referendum, it is also tasked with facing the past. Unmarked graves are still being uncovered at former Magdalene Laundry sites, including the mass grave of up to 800 children discovered in 2017 in an underground chamber at a Tuam home in Galway, Ireland. This grim discovery served as one of the inspirations for Clarke’s film, but also made tackling the subject as tricky one, as the country is still sensitive about the subject. But despite Ireland’s religious culture, Clarke was never worried about upsetting the Catholic Church.

“I’m quite happy to defend what I said about this film and about this situation here in Ireland,” Clarke said. “It was a comment on the potential for a church state to become somewhere where evil happens and evil can be nurtured.”

Nevertheless, she did feel some measure of concern at the film’s Galway premiere. “There are women who are only 40 today who have been in these Laundries,” she said, “so I did worry that there might be people who have trauma from these places that would instantly feel that they were being attacked or they were being exploited by the fact that I even made a horror film with these elements.”

Thanks in part to Clarke’s careful tackling of the subject — the film never mocks the Catholic faith, nor does it present the girls as anything more than victims of a brutal system — the film’s premiere in Ireland was a success, and reception overall has been positive for the film.

“The Devil’s Doorway” doesn’t bring any new tricks to the genre, relying instead on the usual possession film and found footage film scare techniques. However, its exploration of Ireland’s dark history helps it stand out from the pack, and it’s just the latest example of women directors making headway in the horror genre. (Other recent successes include Coralie Fargeat’s “Revenge,” Alice Lowe’s “Prevenge,” and Julia Ducournau’s “Raw.)

“Horror’s the thing we use to learn about the world,” Clarke said. “I don’t think that that’s ever been a male-specific thing. I think what women bring to the genre is just that new perspective. I think the more we have different stories from different perspectives, the more enriching it is for all of us.”

“The Devil’s Doorway” is now available on VOD from IFC Midnight.

This Article is related to: Film and tagged Horror, IFC Midnight, The Devil's Doorway