Plus, watch the video message for all the Belters, Earthers, Martians, and Screaming Firehawks who saved the show. 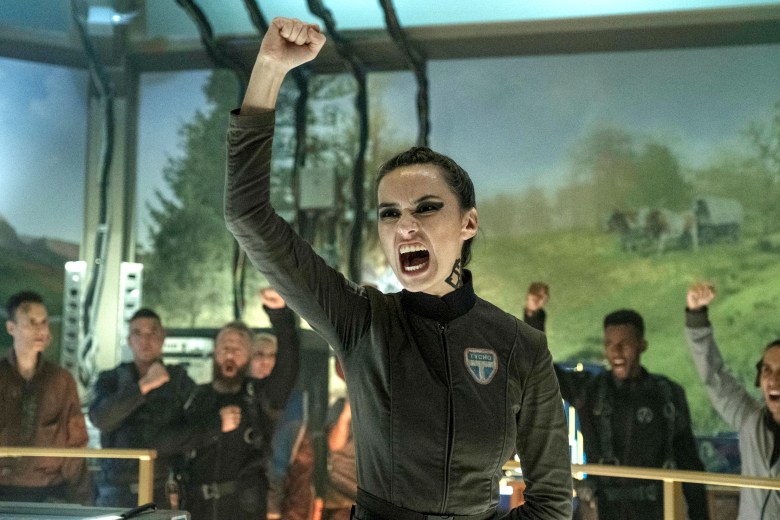 “The Expanse” will continue its adventures for a fourth season, thanks to fans who were vocal about the show and Amazon Prime, who listened and snapped up the series from Syfy after its cancellation. At Friday’s Comic-Con panel for the series, which was part of Amazon’s original series showcase, the cast and crew made their gratitude felt.

“Without the fans, I would not be sitting here,” he said to the packed Ballroom 20. “It was a really amazing grassroots effort. It just popped up… We didn’t put it in motion.” Shankar also marveled over how fans had raised the money to fly a banner over the Amazon offices and to take send a model of the Rocinante into space and get pictures taken of it.

How could Amazon ignore those efforts? They couldn’t. In May, Amazon released the following statement:

“We couldn’t be more excited that ‘The Expanse’ is going to continue on Amazon Prime! We are deeply grateful that Jeff Bezos, Jen Salke, and their team at Amazon have shown such faith in our show. We also want to thank Laura Lancaster, head of Alcon Television for her tireless efforts. We are fully aware that this wouldn’t have been possible if it wasn’t for the staggering outpouring of support from the most creative, hardest working sci-fi fans around the world. From Reddit campaigns to airplanes, we say thank you. It worked!”

Check out the thank-you video that was shown at Comic-Con:

Now that Season 4 is a go, Shankar was able to tease a little bit of how the series would continue.

“We’re in the second big movement in the books … a new chapter in humanity. We’re no longer constrained in the solar system,” he said. “It’s how humanity deals with this vast new frontier.”

He also speculated about how moving from the limitations set by being on a basic cable network like Syfy to no limitations on Amazon would affect the show creatively and technically.

“It’s going to be more awesome,” Shankar said. “We no longer have the language restrictions. [We can] curse like a sailor. We don’t have the nudity restrictions… and the 4K and HDR will look amazing on Amazon. We’re no longer constrained by a 43-minute box. We can put some air into it, let things breathe a little bit more. So we’re excited to be on Amazon Prime.”

One other change could be coming to “The Expanse” if one fan has any say in it. After being asked if the show or Twitter feed could showcase Shankar’s pit bull more, he responded, “I’d be very much in favor of having pets in ‘The Expanse.’ I’ll talk to my wife about having Margot on the show.”

“The Expanse” will return for its triumphant fourth season on Amazon Prime sometime in 2019.

This Article is related to: Television and tagged Amazon, Comic-Con, The Expanse