"Look at what's really scary," the filmmaker told IndieWire. "Not aliens, not supernatural, that stuff – the KKK in the streets at night, Charlottesville, that's scary. That's horror." 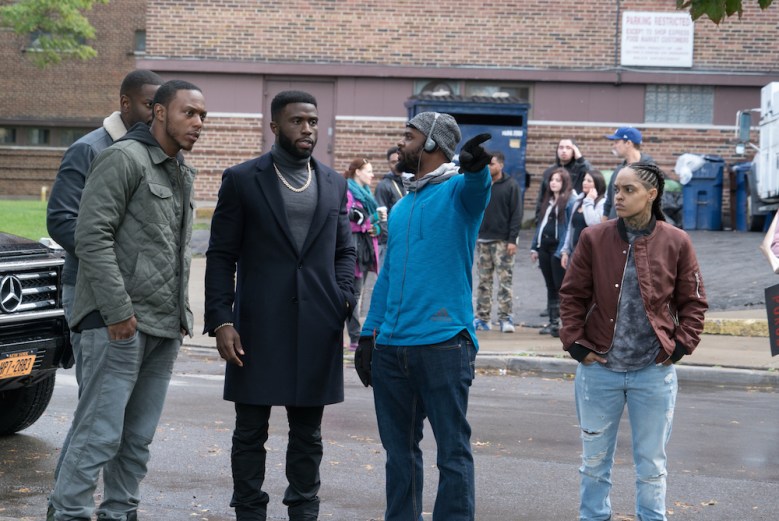 On the set of “The First Purge”

As “The Purge” franchise has grown over five years and four films, the series has moved from its roots as a high-concept home invasion thriller that focused on a well-off white family attempting to get through the night when their high-tech security system fails to safeguard against mad marauders during the worst night of the year. Subsequent sequels moved the action outward, and introduced more-diverse characters with timely stories (at least, more timely than “Oops, didn’t spend enough money to save my fancy house.”). Sequels “Anarchy” and “Election Year” expanded the Purge mythology, including its roots as a government plot to eradicate poor people.

That concept drives Gerard McMurray’s prequel “The First Purge,” which dramatizes the eponymous first “experiment” in chilling fashion: A new political party (The New Founding Fathers) created the Purge as a way for an uneasy Americans to release their worst impulses, an idea they test in a 12-hour period on Staten Island. Residents receive $5,000 if they stay on the island during the event — more if they “participate” further. The film opened July 4 and made for canny holiday counterprogramming, pulling in nearly $10M million on opening day.

Read More: ‘The Purge’ Has Turned Into Our Best Genre Franchise, So Here’s Hoping ‘The First Purge’ Isn’t the Last

“It always spoke to me as a filmmaker,” said McMurray, who made his debut with the Netflix fraternity hazing drama “Burning Sands,” which premiered at Sundance 2017. However, he wasn’t sold on making this his sophomore effort until he was sure the franchise allowed room for his own vision.

“It was socially conscious and relevant, and really smart,” he said. “I didn’t want to do the fourth [film] in the franchise, but when I realized it was a prequel and I could make it fresh and make it original and make it my own, I was really like, ‘Oh, yeah, I’m in this, I can really make this hot.'”

Like “Burning Sands,” he saw the opportunity to focus on the experiences of people of color during extreme incidents. Most of the cast members in “The First Purge” are POC, including Y’Lan Noel as neighborhood drug lord Dmitri, along with his ex-girlfriend Nya (Lex Scott Davis) and her little brother Isaiah (Joivan Wade), and their friends Dolores (Mugga), Luisa (Lauren Velez), and Selina (Kristen Solis). Each of them are trying to ride out the night without incident, which surprises some of the Purge’s creators, including Marisa Tomei as a psychologist literally known as “The Architect” and political lackey Arlo Sabien (Patch Darragh). 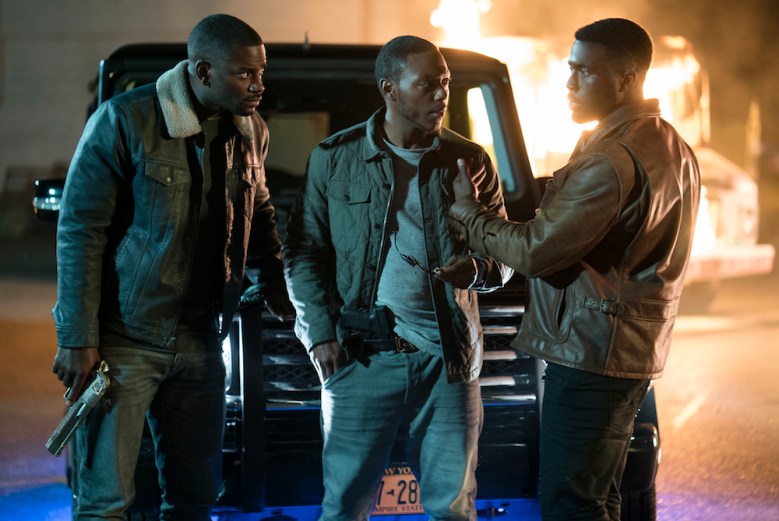 “That was the thing I wanted to talk about,” he said. “Humanizing the ‘hood, you show people it’s not all bad, it’s not going be all just killing and purging. I think that was important in just showing different brown and black people in a community. I get to show what it’s like for a black man and for people of color on Purge Night.”

As the Purge Night winds on, Tomei and Darragh’s characters start to get anxious that not enough bad deeds are being committed. As they explain early on, a “successful” Purge Night is one that includes lots of crimes, and that’s precisely what they want (all the better to push the Purge to a national level). So the evening goes on to include mercenaries, white nationalists, and literal KKK members, all introduced by outside forces. For McMurray, that’s the stuff that true horror is made of.

“The idea of The Purge deals with horrors of the real world,” he said. “I think horror movies take the scenes that scare you in real life and turn it into a boogeyman, like a monster. I think these things are a metaphor that we can confront and maybe conquer. What I see as real and as horrific, that’s scarier than ghosts. The government is the boogeyman. The IRS is scary. Not aliens, not supernatural, that stuff – the KKK in the streets at night, Charlottesville, that’s scary. That’s horror.”

In one chilling scene, a peaceful group gathered to ride out the night at a local church are gunned down by a group of motorcycle-riding white men. It’s the kind of scene that purposely evokes the 2015 Charleston church shooting, and McMurray pointed to that horrific incident as the kind of thing he felt was important to reference in his film.

“As a black man, person of color, these are things where I’m just experienced, and I thought that was something that I wanted to explore in the film,” McMurray said. “It was something I thought was important to show and not forget. … For me, the things I show [in the film that] are scary, are scary for me in real life. You see a man [running] and police behind him, that’s scary for me.”

While the film’s marketing played up connections to President Donald Trump — a number of posters and trailers center on a MAGA-style red hat bearing the film’s title — McMurray doesn’t see the film as a direct reaction to the current administration, saying those elements are meant reflect that the film is also a “political satire.” And no, the president at its center (played by Ian Blackman) doesn’t look like Trump. He looks like any politician.

“I definitely pulled from the real-world things,” he said. “Donald Trump just happened to be in the news, you know? A lot of things I pull from political stuff that’s in the world. …  I think that, if anything, President Bracken is more of a Richard-Nixon type, if anything.”

Still, there’s a tremendous level of catharsis in “The First Purge,” which includes at least one guns-blazing shootout involving hood-wearing members of the KKK, plus an apartment-building battle royale between Dmitri and mask-wearing villains that seems built to make audiences stand up and cheer.

“Those guys with the blackface masks and the KKK, they needed to be taken on,” McMurray said. “Having them fight off the oppressive government makes it really cathartic, it’s really thrilling to see that. People fight back and show resistance, and it’s hopeful. But also, it’s fun, because who doesn’t want to see someone oppressive or hateful taken down. … In my head, this is my Revolutionary War film, you know?”

“The First Purge” is in theaters now.

This Article is related to: Film and tagged Gerard McMurray, The First Purge