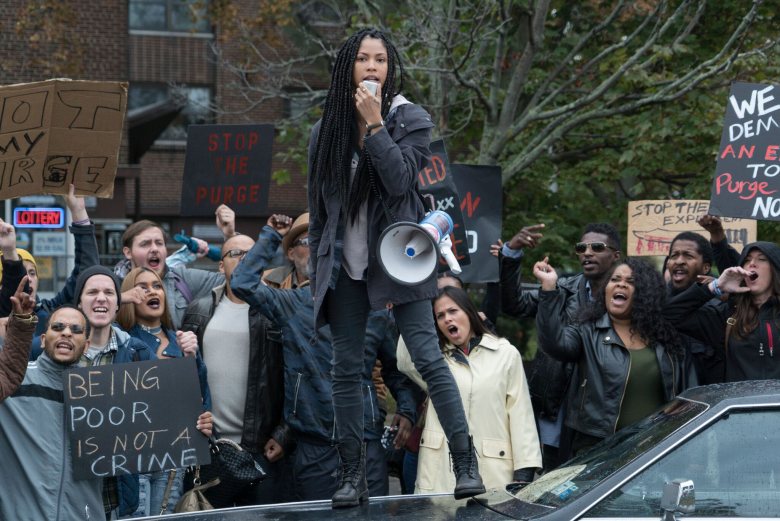 When “The Purge” launched a scrappy B-movie franchise by envisioning a future where murder is legal for 12 hours each year, the outrageous premise ran counter to a self-serious tone, but it carried a dime-store social commentary with potential: Only the rich white people were safe. That observation has blossomed across four movies. No matter their messiness, the “Purge” sequels — cranked out, with a Roger Corman-level efficiency, by Blumhouse — have benefited from increasingly divisive times, culminating in a prequel that funnels national fear over mounting bigotry and class wars into an outrageous cartoon. Trump may be tough to parody, but “The First Purge” transforms his presidency into a bonafide horror movie for people of color, and derives an empowering message from their quest to survive a single night.

The previous “Purge” movies showed the potential of a good idea in search of a proper vessel; now, five years and three movies later, it’s finally found some measure of purpose. “The First Purge” is another absurd B-movie, uneven and ludicrous across the board, but altogether transfixing for the way it funnels Trump-era terror into an empowering crowdpleaser.

Directed by Gerard McMurray (“Burning Sands”) from a screenplay by James DeMonaco (who directed the first three entries), “The First Purge” has been conceived to explain the roots of this barbaric ritual, and finds them in national discord. The election of the Tea Party-esque New Founding Fathers to the presidency drives rich white men to power, and they quickly get to work, conceiving of the purge as an experiment on Staten Island. Though New York’s “forgotten borough” has its fair share of diversity, it’s also the city’s wealthiest region, but the New Founding Fathers create a dangerous incentive that leaves only the minorities behind: Anyone who stays on the island for the night receives $5,000, plus unspecified bonuses if they choose to “participate” in the murderous rampages set to take unfold on the streets after dark.

Naturally, the poorest black communities stay behind, holed up and ready for a fight. The resulting chaos channels the spirit of a blaxploitation movie into modern-day rage against the system. Amid the pandemonium, drug dealer Dmitri (Y’lan Noel) contends with a rival goon while attempting to protest his ex-girlfriend Nya (Lex Scott Davis), a furious activist mainly concerned for the safety of her younger brother Isaiah (Joivan Wade). Raised on the streets and absorbing the violence around him, Isaiah’s unsure if he wants to avoid the purge or take advantage of it. This conundrum widens to the other sane characters trying to survive the night as they come to terms with a new battlefield forced upon them. The dialogue may be cheesy, but not devoid of purpose. “They turned our hood into the coliseum,” says one local. “The question is, are we the gladiators or the slaves?”

Meanwhile, a neighborhood junkie named Skeletor (Rotomi Paul) roams the streets with syringes strapped to his hands, adding an unnerving slasher component to the standard mayhem. He’s a terrific, menacing villain, whose eyes glow with the souped-up contact lenses the government gave them so they can track his every move and watch the gruesome circumstances from afar. But Skeletor’s an anomaly: Most of the Staten Islanders just want to party. DeMonaco and McMurray have clearly thought through the implications of this premise, and avoid the problematic assumption that black-on-black violence will get worse without regulation; instead, the movie calls that supposition for what it is — a government fantasy. Ultimately, the worst villains careening through Staten Island are white supremacists and the KKK.

While “The Purge” was a sloppy statement on class, the series has been developing its racial polemics across several movies. “The Purge: Anarchy” had Michael K. Williams as a Black Panther-like revolutionary leading the charge against oppressive white men, while “The Purge: Election Year” included the memorable line, “Never sneak up on a black man on election night,” and it anticipated the threat of lunatics running the asylum that characterizes the national mood today. The media, which follows the first purge from afar, attempts to sympathize with the circumstances but naturally comes up short. (A goofy cameo by Van Jones falls flat.) This is almost certainly the first movie in film history to include the line, “We’re all Staten Island tonight.”

More heavy on action than horror, “The First Purge” builds to some of the best filmmaking in the series, with a finale set in the confines of an apartment building that positions Dmitry as a black John McClane, taking down hallways of deranged mercenaries with just a couple of guns. Noel, to date best known for a supporting role on HBO’s “Insecure,” has the makings of a genuine blockbuster star — if the studios will have him. In the meantime, “The First Purge” gives him just enough material to flex his muscles.

These kind of highlights only make the weaker aspects of the screenplay stand out. A control room run by a misguided social scientist (Marisa Tomei) provides running commentary on the night, but that just throws a wrench into the more involving circumstances unfolding elsewhere. Tomei’s saddled with the movie’s most robotic lines, none more egregious than, “What have I done?” These movies may be simplistic allegories, but there’s no excuse for hackneyed dialogue. Still, there’s much to appreciate about the way “The First Purge” finds the roots of the insanity behind this ongoing premise in the people who conceived it. They taught the country to go mad.

Of course, “The Purge” movies are so in love with their potential for social commentary that it can often feel like a self-aggrandizing coup. (While the decision to open Spike Lee’s upcoming “BlackKklansman” on the anniversary of the Charlottesville riots feels meaningful, opening “The First Purge” on Independence Day is a cynical joke.) “The First Purge” manages to avoid being too enamored of itself, until a teaser trailer in the credits for the upcoming 10-episode “Purge” miniseries that feels like a victory lap. The Purge Cinematic Universe (PCU) is a lot less enticing than its metaphorical implications. These movies have stumbled forward like a lovable drunk. “The Purge: Anarchy” was a Carpenter-esque dystopian action movie, while 2016’s “The Purge: Election Year” toyed with Trump-ish anxieties but felt oddly toothless. Only “The First Purge” pulls off a sufficient combination of cathartic release and real-world dread.

But there’s an underlying value to considering the way the series as a whole tracks a widening national crisis. From the home invasion threats of “The Purge” to the attempted obliteration of an entire people in “The First Purge,” the franchise has maintained a persistent metaphor that gives it a unique distinction in modern commercial cinema. It’s some of the dreariest escapism out there. “The First Purge” foreshadows more to come, the sense that every battle fought sets the stage for another one around the corner.

This Article is related to: Film and tagged Horror, Reviews, The First Purge, The Purge