Michael puts his plan into action during the first two minutes of the new season. 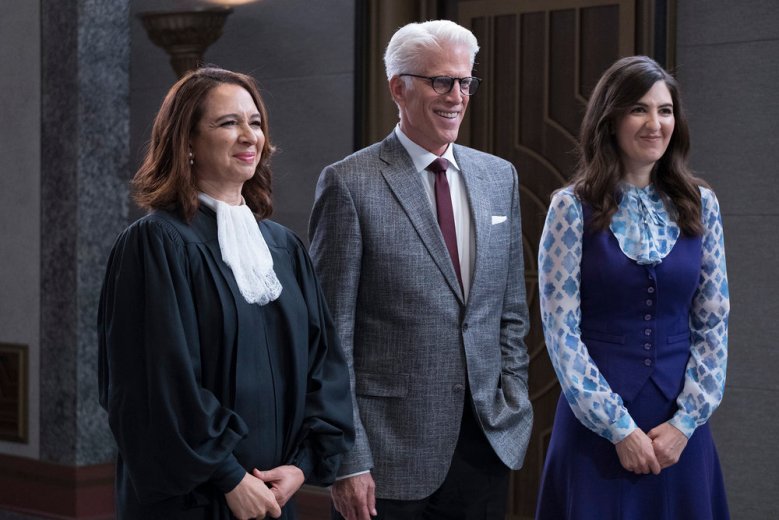 [Editor’s Note: The following article contains spoilers for the first two seasons of “The Good Place,” as well as the first two minutes of Season 3.]

If it wasn’t official before, it sure is now: The four human subjects of “The Good Place” are being sent back to Earth, for real. In the opening minutes of Season 3, Michael (Ted Danson) gets the official stamp of approval to return to Earth and save Eleanor (Kristen Bell), Tahani (Jameela Jamil), Jason (Manny Jacinto), and Chidi (William Jackson Harper) from their respective deaths and thus give them a do-over on their eternal fate.

All was revealed during the NBC comedy’s Comic-Con panel Saturday morning, as the cast above — as well as creator Michael Schur, producer/director Drew Goddard, executive producer Morgan Sackett, and fellow cast members D’Arcy Carden and Marc Evan Jackson — discussed the past and future of “The Good Place.” To end the panel, Schur introduced a clip of the first two minutes of Season 3.

The scene opens with Michael peeking through a door and walking onto a long bridge surrounded by darkness. At the end of the bridge is another door and “The Guard,” played by Mike O’Malley. “This is wild,” Michael says. “I had no idea this was even here.”

He then hands his paperwork to The Guard and explains his purpose: “I have the ruling from the judge to head down to earth and reverse the deaths of these four people,” Michael says, also noting how the unprecedented action may “cause ripple effects in the timeline” but it’s the only way to find out if bad people can become good after they die.

The Guard stamps the form “approved,” and issues Michael a warning about how he won’t have any powers on Earth. Micheal then goes through the door and is shown saving Eleanor’s life — just as it was hinted he did in the season finale. Michael, a big fan of humankind’s most basic experiences, comes back to the The Guard’s station raving about “the traffic” and “pigeons.”

That’s all that was shown, but it’s more than enough to confirm what Schur had stated in an interview earlier this year. After debate sparked up following the ambiguous series finale — specifically, about whether Eleanor & Co. were actually alive again or just put into another simulation — Schur told Rolling Stone, “The four of them are straight-up back on Earth, in a new timeline where they didn’t die.”

But none of that came up during the panel itself. Led by Jackson’s questions, the cast recapped a few well-known facts (Jamil’s first kiss was at the age of 21 and her seventh kiss ever was with Jacinto onscreen) and fittingly celebrated new Emmy nominee Ted Danson. (Jackson only referred to him as “Emmy nominee Ted Danson” whenever he addressed the award-winning actor.)

Schur also took the time to praise Sackett, remembering how on “Parks and Recreation,” the co-creator asked his producer to find an empty lot they could turn into a giant pit and leave there “for potentially seven years.”

“[Sackett] just said, ‘OK,” Schur remembered, noting how most other producers would’ve just walked out of the room and never looked back. “Morgan is the best producer on television,” Schur said.

This Article is related to: Television and tagged Comic-Con, Ted Danson, The Good Place