The creator, producer, and star said initial ads portrayed "The Orville" as a comedy, but he credits viewers for trusting the show to experiment with tone. 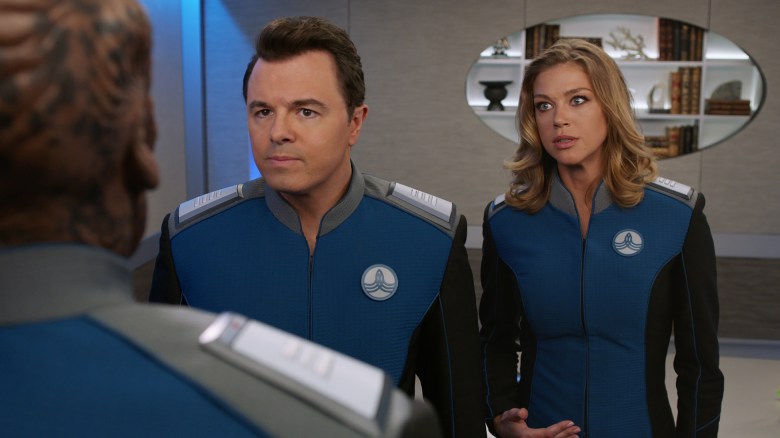 Whether you liked Season 1 of “The Orville” or not, get ready for a more confident version in Season 2.

“I think what you’re going to see in Season 2 is a show that’s even more comfortable in its footing in terms of existing in that goldilocks zone,” Seth MacFarlane said during the series’ Comic-Con panel in San Diego. “Every episode feels like a movie, and I think you’re going to dig it.”

The “goldilocks zone” MacFarlane referred to is the consistent tonal shifts seen — and criticized — in Season 1.

“This show was a tonal experiment of sorts,” MacFarlane said. “Comedy and sci-fi when you blend them together, they don’t always mix well. In features they do, but television is kind of hard to sustain. The pleasant surprise for me was that fans and viewers were willing to let us tell a story. They weren’t waiting for the next joke to come.”

MacFarlane said “different stories call for different tones,” just like life has different tones, and the comedy in “The Orville” was always meant as a “garnish” more than the main course. To that end, he said early advertisements for the hourlong series weren’t in line with the final product.

“Initially, I think the show was a little misrepresented,” MacFarlane said. “It was marketed as a comedy… I’m not sure why. Maybe there was a worry this was so new and weird and different it wouldn’t land.”

But the creator loves what Fox is doing to back Season 2. To kick off the panel, fans were shown the Season 2 trailer featuring new footage and the release date: December 30. Even though the first scene was driven by a classic set-up and punchline — i.e. a joke — MacFarlane said he was happy with the new marketing efforts, including the trailer.

“The experiment was a success,” executive producer Brannon Braga said. “The storytelling is even more assertive and bold [in Season 2], and there’s some really daring narrative stuff that happens.”

“The show was always intended to be what it is now,” MacFarlane said.

The Season 2 premiere should get a ratings boost from the NFL. Producer David A. Goodman said it would premiere “after football,” and December 30 marks the final day of the regular season.

Watch the Season 2 trailer below.

This Article is related to: Television and tagged Fox, Seth MacFarlane, The Orville