This creepy thriller — led by the terrific trio of Coon, Bill Pullman, and Tracy Letts — shifts perceptions to evoke timely themes of isolation and distrust. 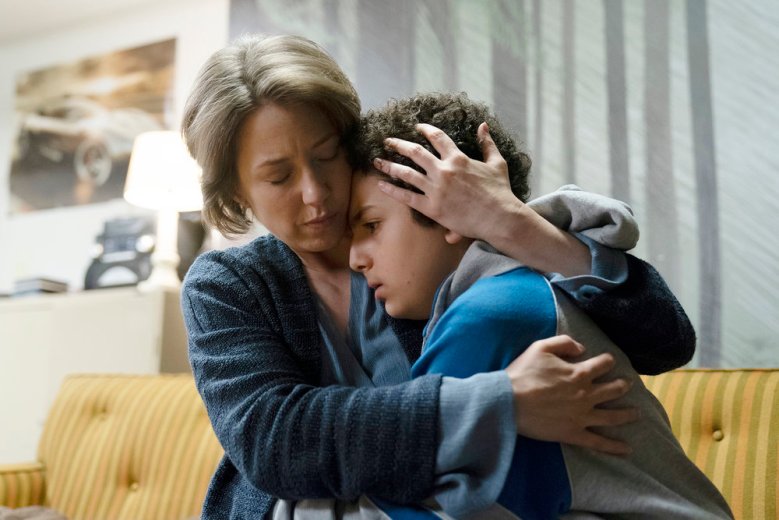 Carrie Coon and Elisha Henig in “The Sinner”

There were a lot of reasons to doubt “The Sinner” Season 2. The source material for the first season — Petra Hammesfahr’s book of the same name — was all used up in the original, Emmy-nominated incarnation. Its star, Jessica Biel, moved on and took most of the characters driving a story about a woman who inexplicably stabbed a stranger on the beach with her. Starting over with just a genre (mystery), theme (murder with a hidden motive), and a supporting character (Bill Pullman’s detective) isn’t exactly enough to guarantee continued success.

Yet creator Derek Simonds assembled a helluva team for an intriguing follow-up season. The first three episodes of Season 2 match the tone and intensity of the writer’s gripping debut, while new cast members Tracy Letts, Natalie Paul, and Carrie Coon more than make up for any holes left by the original cast. There’s also evidence Simonds is interested in doing more than snapping puzzle pieces into place; “The Sinner” uses its ever-shifting structure to force its audience into re-examining presumptions. You don’t know who to trust or who to root for, and Simonds utilizes these doubts to make viewers consider the truth in every argument.

Coon fans (which should really have their own name by now — Coonatics? Coonoisseurs?) should be warned: The Tony and Emmy-nominated actress isn’t featured in a ton of scenes during the first episode; her motivations and identity are part of the hook meant to propel viewers into Episode 2, and that plan works quite well (while leaving no doubt she’ll have a major presence in the season overall.) 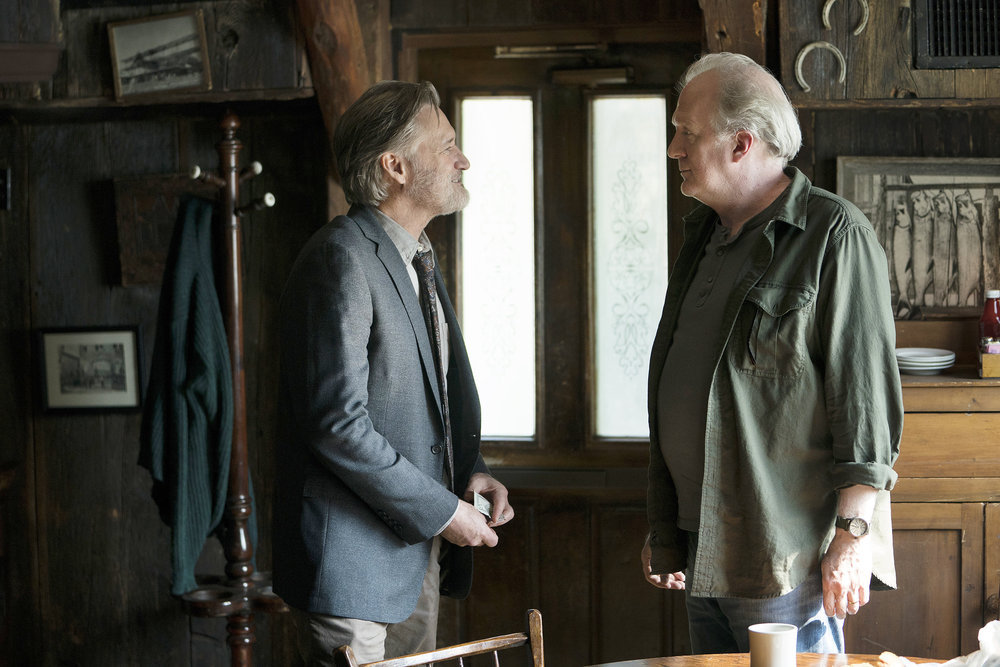 Bill Pullman and Tracy Letts in “The Sinner”

So what can be said about the new premise? Season 2 opens with a family driving to Niagara Falls. When their car breaks down, they pull over at a random hotel for the night. The son is a little quiet, but his odd behavior could stem from his disconcerting nightmares or the obvious tension between his parents. They’re nervous about spending the night at a motel, nervous about leaving their son alone, and over-compensating to make 13-year-old Julian (Elisha Henig) feel safe.

But they should’ve been more concerned with themselves. By morning, both parents are dead and Julian is the only suspect. The local, small-town cops step in, and Heather Novack (Natalie Paul) — the lead detective who’s so green she’s still in her trial period — calls an old family friend for his expert advice. That’s how Bill Pullman’s Harry Ambrose gets pulled into another complicated murder-mystery; Julian’s parents were murdered in his hometown, and Heather’s dad (Tony-winner Tracy Letts) has a personal history with Harry. He makes his return to Keller, lodges with his old buddy, and becomes ensnared by yet another case that’s more than meets the eye. Plus, this time, as they say, it’s personal.

Antonio Campos, who directed the first three episodes of Season 1, returns with a darkness befitting the East Coast; rather than the brown, sunny look of the series premiere, Campos uses greens and blues to evoke earth tones; colors that are slowly ripped away from Julian as he’s pulled further from a natural childhood and into an ugly adult life. 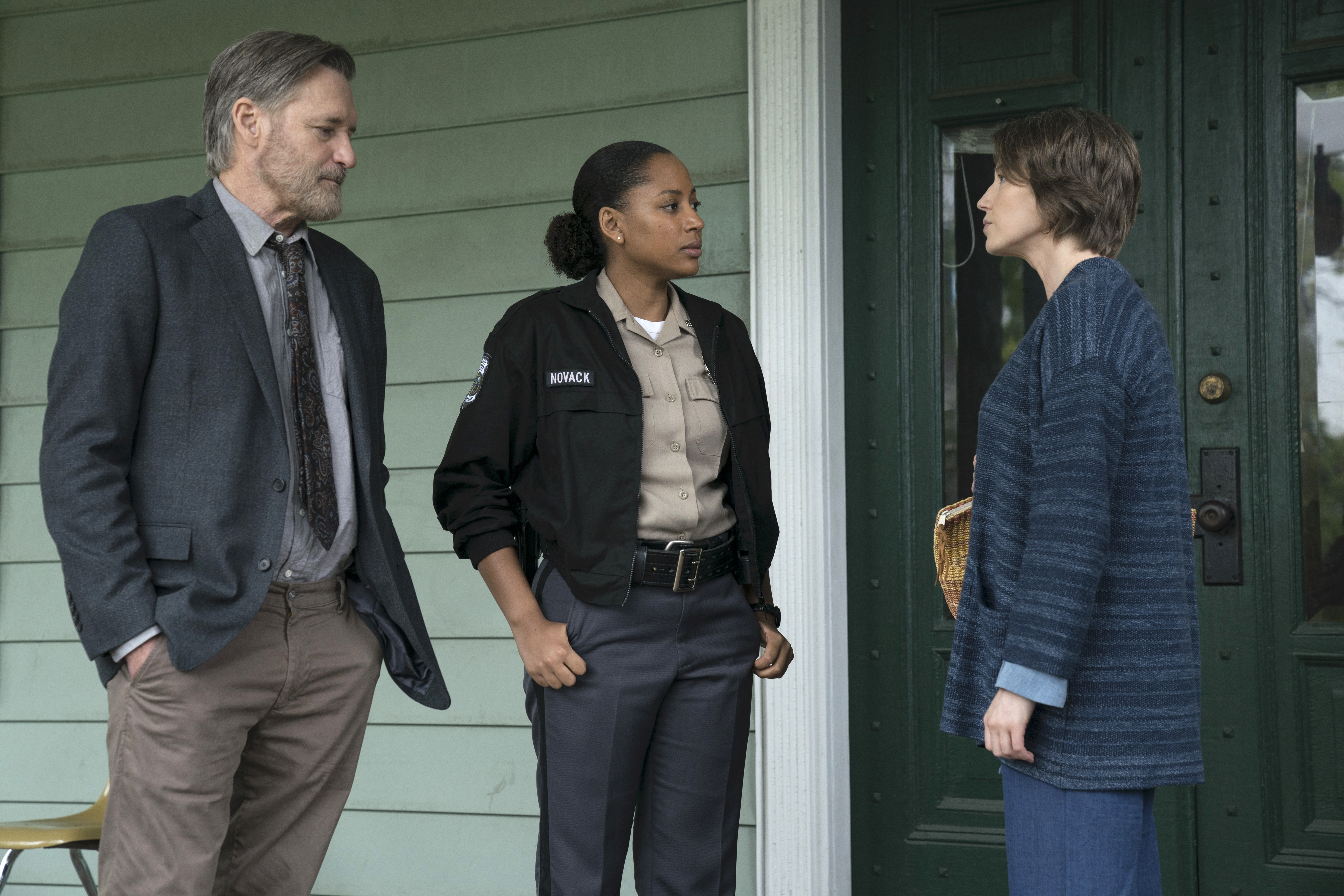 Bill Pullman, Natalie Paul, and Carrie Coon in “The Sinner”

These subtle evocations befit Simonds’ subdued themes. If you want to look for a critique on the unassuming traps of conventional thinking, it’s there; if you want to dwell on how the label of an outsider can apply to anyone, given the right perspective, you can; hell, even if you want to look at Season 2 as a microcosm of Trump’s America, where an ignored group of citizens fight back against a government they don’t trust (often without the benefit of facts), you can do that, too.

But you don’t need to, and it could be argued you probably shouldn’t. The aforementioned interpretations will likely take a backseat for exposition, melodrama and horror, and there’s nothing wrong with that. “The Sinner” remains an enticing twist on a classic whodunit — it’s more like “whydunit” and “howdunit,” filling in the context that’s critical to understanding crime instead of simply assigning blame. The exploration is carefully laid out so each twist is effectively teased, and it’s also made to be a good time, even when it gets dark. The cast of likable actors helps out on that front, and Letts, in particular, stands out early on as a good ol’ boy who’s almost too well-meaning to be trusted. (The Pulitzer Prize-winning playwright seems to be having a great time in front of the camera.)

Season 2 has enough going on it could spin off the rails, but the mere fact it has so much working for it thus far is a big win for everyone involved. “The Sinner” is no one-hit wonder; for a series where someone always dies right out of the gate, this franchise has a lot of life left in it.

This Article is related to: Television and tagged Carrie Coon, The Sinner, TV Reviews