The third episode of "Who Is America?" featured a rap battle between an Atlanta freestyle legend and Cohen's Dr. Nira Cain-N’Degeocello character. 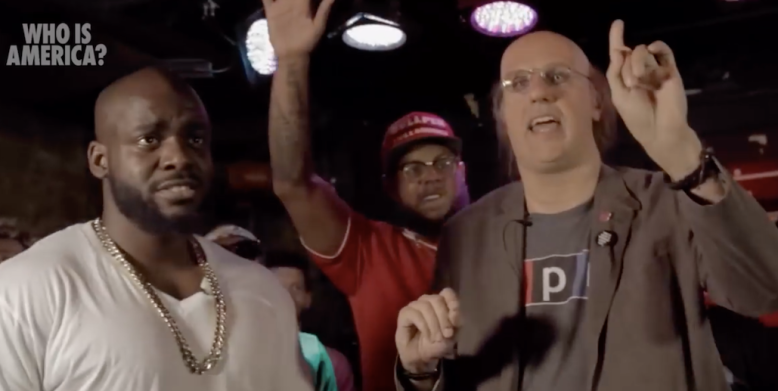 Ness Lee and Sacha Baron Cohen, “Who Is America?”

The third episode of Sacha Baron Cohen’s “Who Is America?” made headlines for Roy Moore undergoing a pedophile lie detector test, but one of the half hour’s lighter and funniest moments found the comedian’s Dr. Nira Cain-N’Degeocello character rap battling Atlanta freestyle legend Ness Lee. Vulture spoke with Lee after the episode aired to get the details on what it’s like to be tricked into going head-to-head with Cohen in a rap battle.

Ness told the publication it was never revealed to him that the battle was being filmed for a Sacha Baron Cohen series. Ness was told a “college professor” who was a “super-far leftist” wanted to battle him as part of a documentary he was making exploring “urban culture.” The rapper was told the professor “really wanted to indulge in a life with the people he fought for for so long.”

“So I’m like, ‘Okay, I guess we could do that,'” Ness said. “They paid me what I asked for. It was so crazy, because they really play up to being a low-budget production. They paid me in fives and ones, and they shorted me, like, four dollars. [Laughs.] I’m definitely not mad at that at all. They were definitely trying to keep up the image of being some college project that happened to end up on Showtime.”

Ness said after the battle he didn’t think the footage would ever materialize into anything substantial. The rapper said Cohen fully committed to the character before the rap battle, so much so that he never suspected Dr. Nira Cain-N’Degeocello was somebody else in disguise.

“I was so fooled by him. His mannerisms were so genuine,” Ness said. “It’s like he sat down to study somebody in their 50s for months. Just to see how they walk and move and shake people’s hands. How they say certain words. It was so genuine. After my friend told me it was Borat, I had to really think back in my mind. This guy might be the greatest actor of all time.” 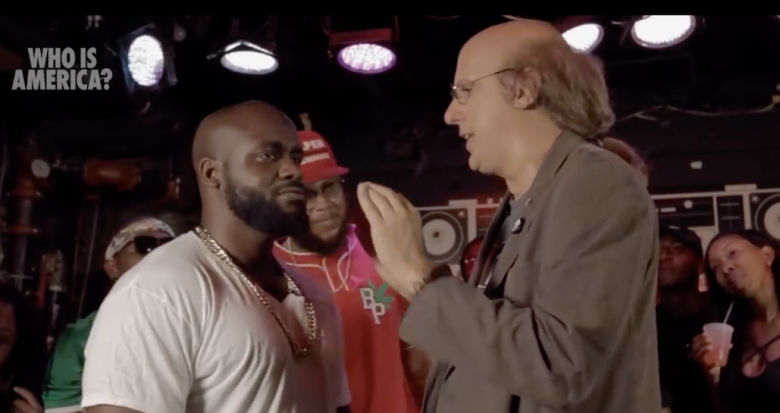 Ness Lee and Sacha Baron Cohen, “Who Is America?”

Ness didn’t find out the footage was actually for Cohen’s “Who Is America?” until a couple weeks ago. A friend of Ness who happens to be a Showtime staff worker saw an early screening of the show and sent Ness a message that read, “Bro, did you battle a Jewish guy last year?” Ness responded in shock since he thought no one would have ever seen the footage, but the rapper’s friend assured him the footage would be a “huge look” for him.

“The day that the show premiered, he hit me back on Twitter and said, ‘Yo, it was Borat that you battled!’ I was like, “What!!!!” [Laughs],” Ness said. “I thought it was cool and dope. I’m a big fan of Sacha Baron Cohen. But I watched the first episode and I got terrified. Absolutely terrified. I thought he was going to make me look crazy. But I came out looking okay.”

As for Cohen’s rapping abilities, Ness said the comedian “sucks,” although he did give Cohen’s freestyle skills a rave review.

“Sacha’s freestyle ability is ridiculous,” Ness said. “I’m listening to the references he’s using. He’s referring to actual cases they had back in the day for suffrage and all sorts of other things. His words and vocabulary are ridiculous. His freestyle is actually crazy! I’m like, ‘Yo, this old Jewish man is very quick on his toes.’ But his rapping ability? I’m not gonna lie. It sucks. Absolutely terrible rapper. But his freestyle ability was through the roof.”

You can watch the rap battle clip from “Who Is America?” below. The series airs Sunday nights at 10 p.m. ET on Showtime. Head over to Vulture to read the complete interview with Ness.

This Article is related to: Television and tagged Sacha Baron Cohen, Showtime, Who Is America?