The Oscar-winning actress stars alongside Ken Watanabe in Paul Weitz's film version of the bestselling novel. 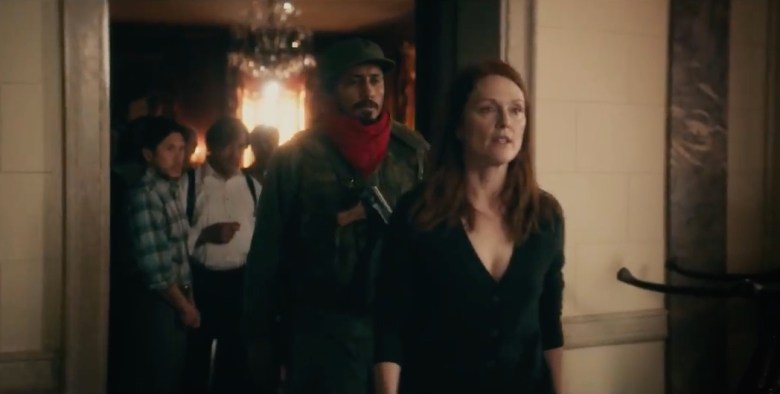 In an undisclosed country, a party unfolds. It’s a big, splashy affair, thrown at the home of the vice president of an unnamed military dictatorship, with one major marquee star set to perform: world-famous soprano Roxane Coss (Julianne Moore). The vice president is not actually in attendance, but a beloved guest is, one who just so happens to adore Roxanne’s voice. He’s wealthy Japanese industrialist Katsumi Hosokawa (Ken Watanabe), brought to the palace in hopes that he’ll be so charmed by Roxane’s performance that he’ll fork over millions to a struggling country. That’s not what happens.

Based on Ann Patchett’s bestselling novel of the same name, Paul Weitz’s “Bel Canto” opens with a party that soon turns into a terrifying situation, when a guerrilla rebel group arrive and take hostages, in hopes that their bold plan will lead to the freeing of their compatriots. What unfolds is a strange stand-off between the captors and their hostages, one that leads to unexpected entanglements. Through it all, Roxane’s voice binds them together.

And, to add a big dose of realism into the film’s crazy premise, in the film, Moore’s vocals will be performed by international opera star Renee Fleming.

Check out the first trailer for “Bel Canto” below. The film will hit theaters on September 14.