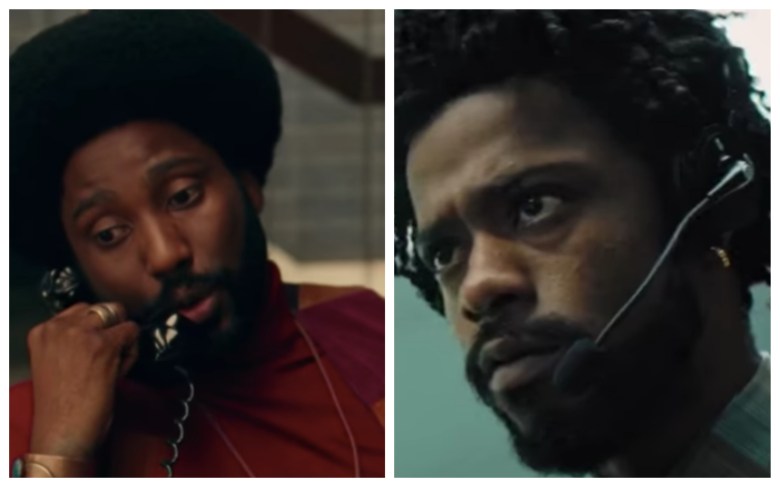 “BlacKkKlansman,” “Sorry to Bother You”

Spike Lee’s “BlacKkKlansman” and Boots Riley’s “Sorry to Bother You” are very different movies — one is about a black police officer infiltrating the Ku Klux Klan, and the other is about a black telemarketer working his way up an evil corporation — but they both explore the presence of racism in everyday language. In both cases, black characters adopt a stereotypical “white voice” to achieve their goals. This connective tissue has already inspired more than one thinkpiece on the issue, but none of them have picked up on the empowering message common to both films.

As an aspect of a cultural identity, “African American Vernacular English” (AAVE) has long been weaponized against African Americans. Numerous studies report on discriminatory practices that are hostile towards black people, across industries, based entirely on the sound of their voice. As Riley’s absurdist satire “Sorry To Bother You” illustrates, capitalism suppresses the “black voice,” by making it seem like a detriment to success.

The film’s lead character — a black telemarketer (LaKeith Stanfield) who discovers a magical key to professional success known as the “white voice” — is forced to negotiate his own identity in a way that his white co-workers and superiors don’t have to. And therein lies the conundrum: multiple warring ideals happening within a single black body. (In his seminal essay “The Souls of Black Folks,” WEB DeBois calls this experience a “double consciousness.”)

Essentially, the black/white voice dichotomy is a form of “code-switching.” The term has grave connotations for African Americans, who have long struggled to navigate “white spaces” — for example, code-switching in order to be seen as a “non-threatening” black person, which, at times, could mean the difference between life and death; or, as “Sorry to Bother You” highlights, code-switching as a determinant of success or failure in the workplace.

In Lee’s “BlacKkKlansman,” black undercover officer Ron Stallworth (John David Washington) doesn’t exactly code-switch because his “white voice” is just the way he talks. Set in the early 1970s, a time of great social upheaval as the struggle for civil rights rages on, Stallworth resolves to make a name for himself and a difference in his community as the “Jackie Robinson of the Colorado Springs police force,” and sets out to infiltrate and expose the Ku Klux Klan.

Just as it serves as a key communications device in “Sorry to Bother You,” the telephone is Stallworth’s sole method of speaking with members of the KKK organization he is assigned to infiltrate — people who have attached scornful ideas to black identity (views that are still not-so uncommon today as Trump’s America has shown), and who are so overwhelmed by their own prejudices and stereotypes about speech patterns belonging to African Americans that they don’t realize they are speaking to a black man.

But Stallworth also has to contend with a language hierarchy from his supposedly more liberal-minded white co-officers and superiors. For example, in a scene early in the film, his Chief (Robert John Burke) expresses concern over the investigation, fearing that Stallworth’s blackness would be outed solely because of his voice. This prompts Stallworth to ask: “What does a black man sound like?” As the chief struggles to respond, the scene recalls the “I Speak Jive” sequence in “Airplane!”, in which an elderly white woman demonstrates her capacity to do just that. The problem isn’t Stallworth’s voice, but the assumption being made about it by his white colleague, and Stallworth eventually uses those prejudices to his advantage when he turns them on the Ku Klux Klan.

This forms a striking contrast to “Sorry to Bother You,” where the “white voice” is a performance of “whiteness” — a soothing tone devoid of the racist stereotypes often associated with AAVE, and one that carries class implications as well. In Riley’s world, “white voice” is effectively a rejection of the “black voice” and black identity itself.

As a telemarketer at the corporate behemoth Worryfree, Cassius Green (Lakeith Stanfield) employs his “white voice” on the job, cold-calling potential customers. His use of the voice is so effective that it secures him a promotion, turning him into a “Power Caller” — a career move that’s accompanied by a literal move to a higher floor in the building (with its own secure elevator), where he finds a far more spacious, luxurious and peaceful environment than the cubicle hell just beneath it. 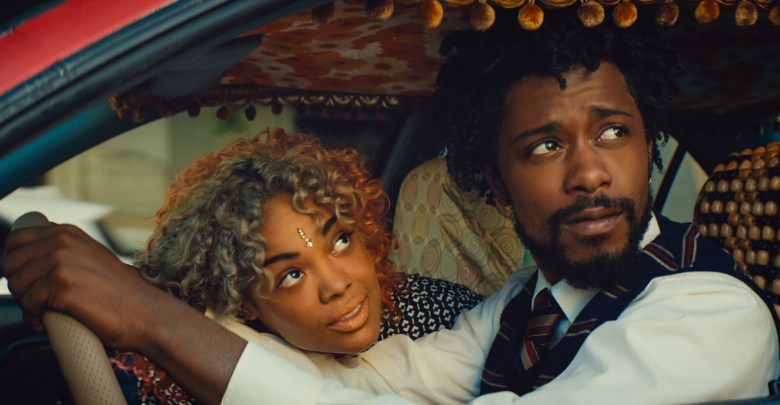 Tessa Thompson and Lakeith Stanfield in “Sorry to Bother You”

It’s also a place where Cassius is required to use his “white voice” all the time, completing the transformation of his white voice, as he starts to get lost in his “white voice privileges.” He starts to become so comfortable that he even uses the “white voice” outside the office, accidentally using it to address his artist girlfriend Detroit (Tessa Thompson). She’s upset, but the reaction is a hypocritical one, as we later see her using her own “white voice” when dealing with potential upscale buyers of her protest art.

Cassius only gets to use his normal voice later on, at a party thrown at the CEO’s (Armie Hammer) lavish home, where he’s intimidated into performing a rap for the white executive and his mostly white guests. (The cringe-worthy performance is entirely consisted of the n-word and “shit,” emphatically repeated throughout, with the mostly white crowd repeating it in chorus). He’s forced to fit stereotypical white expectations of his black identity. And with that, Riley — notably, a veteran hip hop artist — provides a cogent illustration of the way capitalism forces black people to perform in accordance with stereotypes by rewarding their “performances.” Once Cassius breaks free of the spell, joining the resistance, he reverts back to his normal voice. He’s comfortable simply being himself.

Cassius falls into a long history of black men who feel suppressed by a white society. Jean-Paul Sartre’s opening to his essay “Black Orpheus” asks, “What would you expect to find when the muzzle that has silenced the voices of black men is removed?” The answer is simple: a complete transformation in the conversations we have around issues of race. The simple act of accepting others who speak differently is a potential big step toward healing divisions across the country. We’re not quite there yet — but these two movies at least get the conversation started.

This Article is related to: Film and tagged BlacKkKlansman, Boots Riley, Sorry to Bother You, Spike Lee