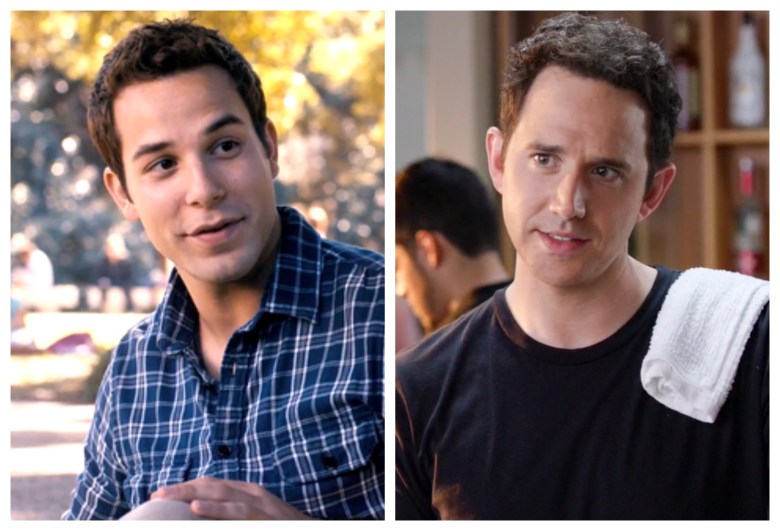 On “Crazy Ex-Girlfriend,” the love story of Rebecca (Rachel Bloom) and Greg (Santino Fontana) never did follow any typical trajectory for romance, and the final season will put a new face on it again, literally. At the Television Critics Association press tour on Monday, co-creators Rachel Bloom and Aline Brosh McKenna reveled that Greg will return, but he’ll be recast with Skylar Astin of “Pitch Perfect” fame.

Greg — the brainy, alcoholic bartender who had smoldering chemistry with Rebecca — left midway through Season 2 so he could pursue schooling and recovery away from Rebecca in Atlanta. When he left, it was clear that they still had feelings for each other, but they were problematic, as outlined in the song “Shitshow.” Greg’s return with a new face will highlight how one’s perception of another person can change to mirror Rebecca’s own changes.

Bloom said, “We wrote [Fontana] off the show because he voluntarily left. And he’ll be in ‘Tootsie’ on Broadway… but with an actor leaving, that left an exciting gap. His character has become like lore.” Therefore, the show wanted to try a “different angle” for the return of the “mythic figure.”

“The episode where he comes back we’ll play with perception,” said Bloom. “It feels like a reimagining, not a recasting… We’re going to call it out. It’s not a Becky on ‘Roseanne’ situation.”

Brosh McKenna added that the episode will be shot from the first-person point of view. “Perceptually it’s part of the story,” she said.

Although Fontana’s stage career is flourishing, this is not the case of his being unavailable to do “Crazy Ex-Girlfriend.” This was a deliberate choice by the show to take a “leap and experiment.” That said, Fontana was the first person they called once they decided to take this approach so that he was aware.

Check out more information revealed about the final season: Theme Song: Following tradition, “Crazy Ex-Girlfriend” will shoot a brand-new theme song for the new season. Bloom had previewed it by singing it on a panel at Comic-Con in July. On Monday, she revealed that the 1970s/‘80s sitcom-inspired opening sequence will have one element that will change each episode. Other series that have done this include “The Simpsons” (the couch gag, Bart’s chalkboard line, and Lisa’s sax solo) and “Bob’s Burgers” (the names of the store next door and the pest control van).

Patton Oswalt: As announced at Comic-Con, the comedian’s creepy security guard character Castleman will be back, but this time he’ll sing. He’ll be in one of the many group numbers this season, and this one will include numerous guest stats. On Monday, Oswalt tweeted that he would be rehearsing the dance number the next day.

My dance rehearsal is tomorrow! Sparkles, everyone! https://t.co/D4qvOzv5Sd

Rebecca’s Mental Health and Romance: When last we saw Rebecca, who had decided to take responsibility for her actions and reject a plea of insanity for an attempted second-degree murder charge, despite surviving a suicide attempt and being diagnosed with borderline personality disorder (BPD). This year, she’ll be playing catchup. The second half of the season will deal with her romantic life.

“She’s settled, and then chaos starts around her and she finds herself in a bunch of romantic comedy [situations],” said Bloom.

Brosh McKenna noted that previously, Rebecca had been a catalyst for others – Greg learning that he’s an alcoholic and Josh coming to terms with his own stuff. Now it’s Rebecca’s time.

What I Really Want to Do Is Direct: Both co-creators will be directing this season. Bloom will helm the penultimate episode, while Brosh McKenna will direct the finale.

“Crazy Ex-Girlfriend” will return for its fourth and final season on Oct. 12 on The CW.

This Article is related to: Television and tagged Crazy Ex-Girlfriend, Skylar Astin, TCA