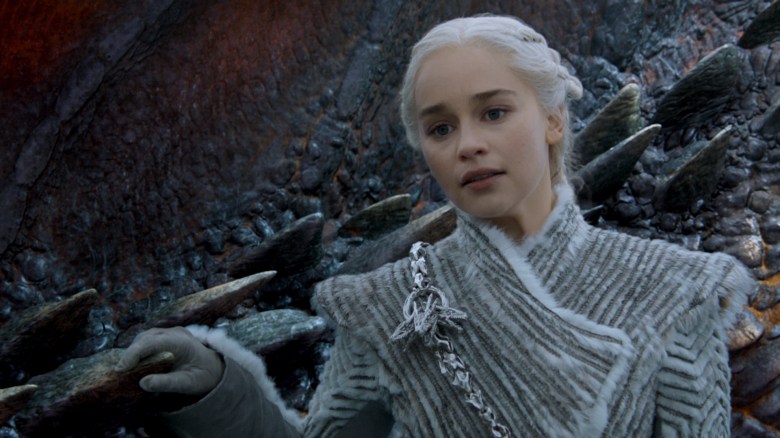 In the penultimate “Game of Thrones” seventh season, Daenerys’ absolute quest for power informed both the production and costume design of perennial Emmy winners Deborah Riley and Michele Clapton. Highlights included the imposing Dragonstone Throne Room set and striking winter coat, which were symbolic of Dany’s confidence and strength.

“In the top shot, it was important to be able to show Daenerys [Emilia Clarke] crossing the space for the first time, the strength of her family history built into the fabric of the space,” said three-time Emmy winner Riley of her nominated production design in “Dragonstone.”

Read More: ‘Game of Thrones’: How VFX Achieved the Impossible Mission ‘Beyond the Wall’

Likewise, the style and cut of Dany’s wardrobe fit her like a powerful uniform, including the wide shoulders. But there was something special about the white coat she wears when coming to the rescue of Jon (Kit Harington) in the Emmy-nominated episode, “Beyond the Wall.”

“It was the first time that I could remember that Dany had put herself in danger that is not necessarily for personal gain, so the white was this sense of purity,” said costume designer Clapton (a three-time Emmy winner for “Game of Thrones” and last year’s winner for “The Crown”). “It had an honesty to it…she has fallen in love with Jon.” 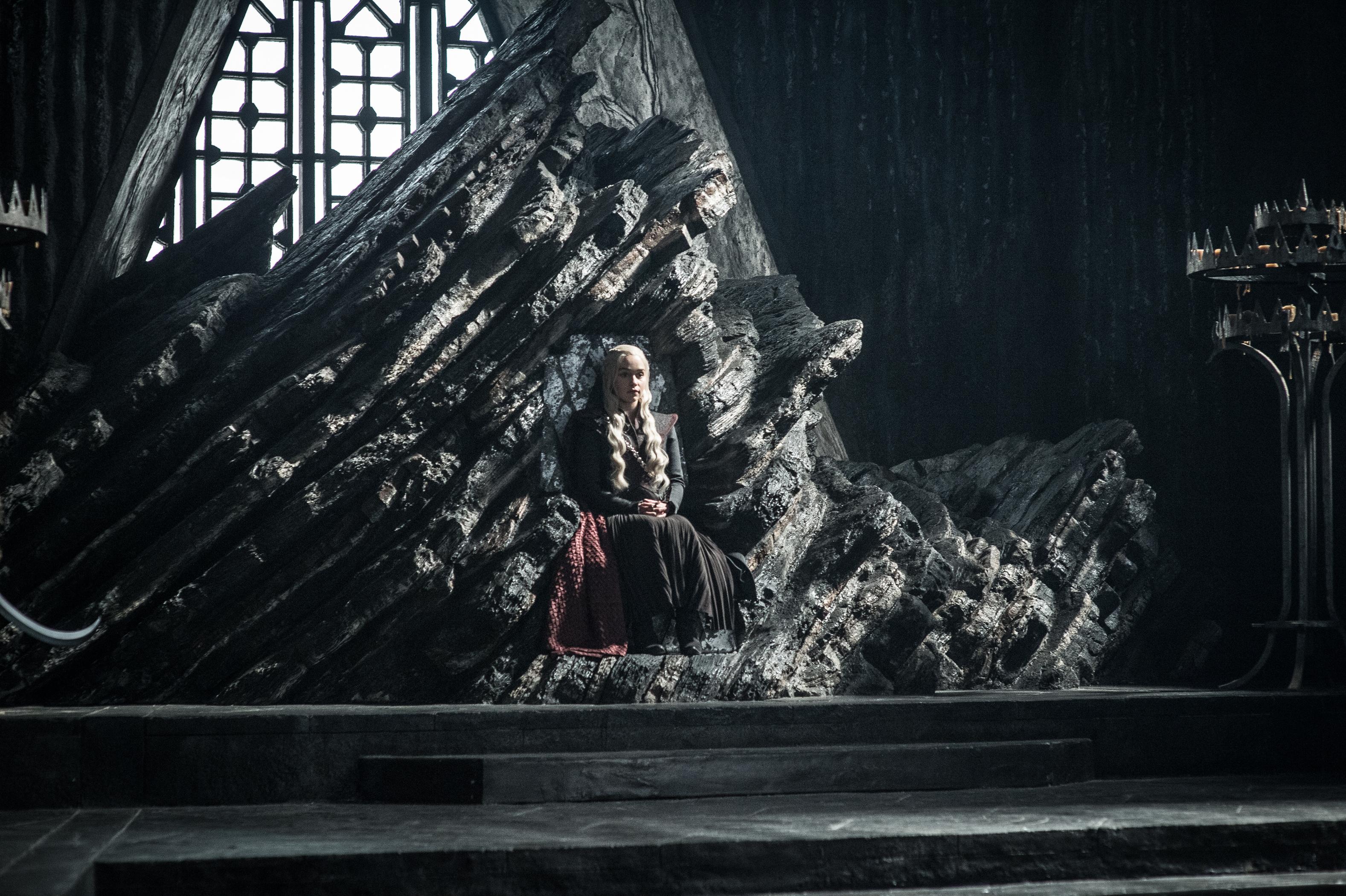 When describing what they imagined for the Dragonstone Throne Room, showrunners David Benioff and Dan Weiss emphasized a space with forced perspective and a totalitarian aura. “The room had to look like it was constructed of solid materials, taking the lead from Zumaia [the landing spot for the Daenerys shot in Spain], but to also feel like it possessed a certain majesty,” Riley said.

“The triangle with the top lopped off was a shape that became a very repeatable symbol of power and allowed the space to look like it was standing on its tippy-toes in an uncomfortable defiance of gravity,” she added. “There was nothing that felt welcoming about the space, it spoke only of ambition with all of the focus towards the throne.”

Given that Dragonstone started life as a series of cave-like rooms, it was important for Riley that the Throne Room evolved out of the cave. For example, the walls soared into the CG castle that had already been established. Also, the sedimentary rock strata found in Zumaia became instrumental in tying the two spaces together.

“The central idea of the space needed to hinge on the idea that the throne was to be carved into the rock,” Riley said, “not a piece of furniture that could be moved. Instead, the whole building had to look like it had been built around it. It was important that the seat of Targaryan power feel like it was innate to that very spot.” 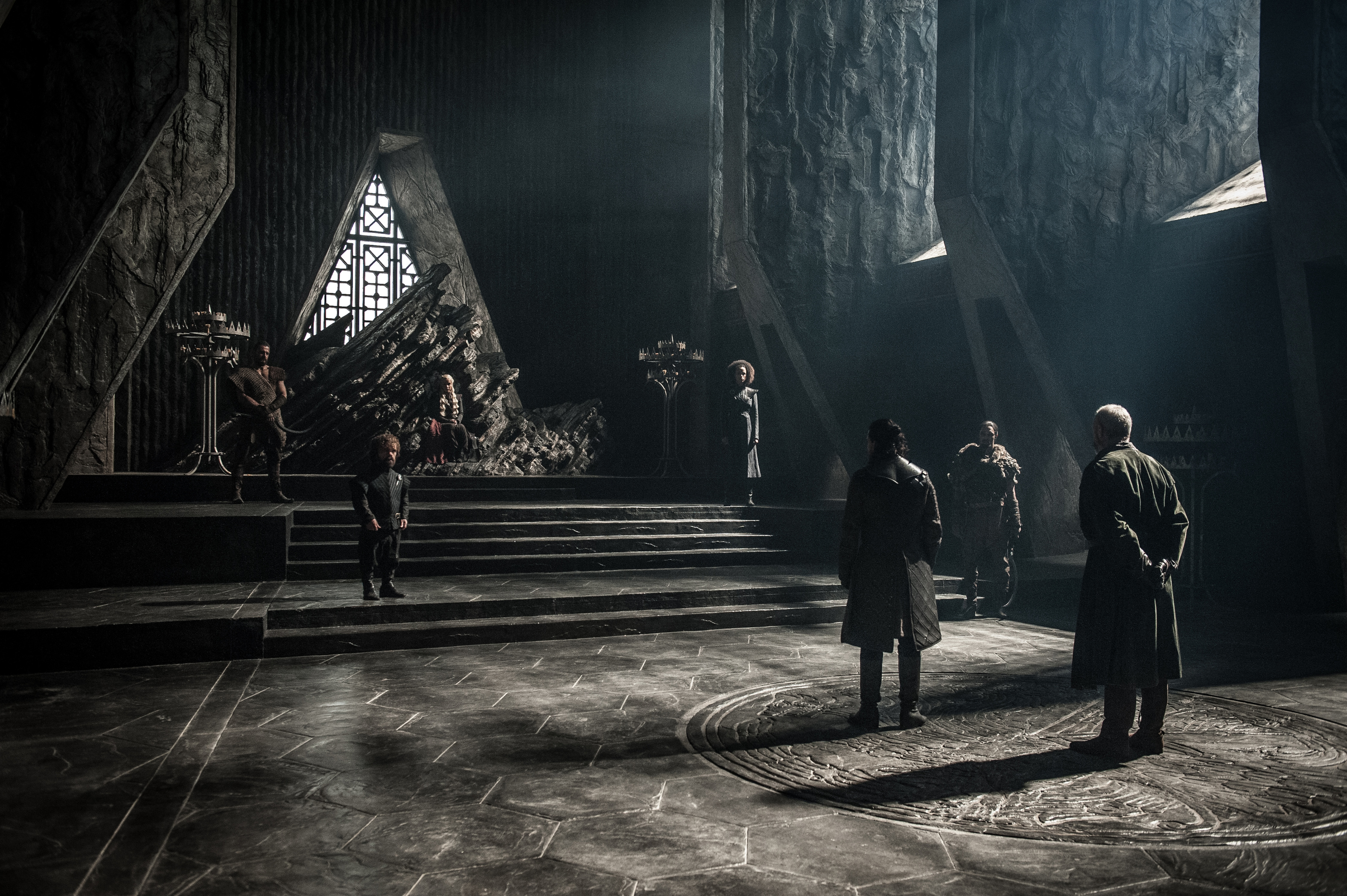 Riley devised sharp shapes, dark shades, cool tones, and a hexagon motif as her tribute to Northern Ireland and the Giant’s Causeway (home of the series). “It is subtle, but the hexagon shape helps to anchor the space, particularly with the big Targaryan sigil carved into the floor,” she said. “In the top shot, it was important to be able to show Daenerys crossing the space for the first time, the strength of her family history built into the fabric of the space.”

Meanwhile, Clapton equated the visual importance of Dany’s white coat with mythology. “I wanted to create this powerful image of her descending like an Angel to save these men from imminent death,” she said.

It was actually easy for Clapton to design the coat, given the simplicity of its silhouette, but very difficult to make. “It took a lot of prototyping and collaboration between departments within costume,” she added. “We created the ‘fabric’ by stitching lengths of leather, faux leather, short white faux fur, and long fine dark faux fur together. 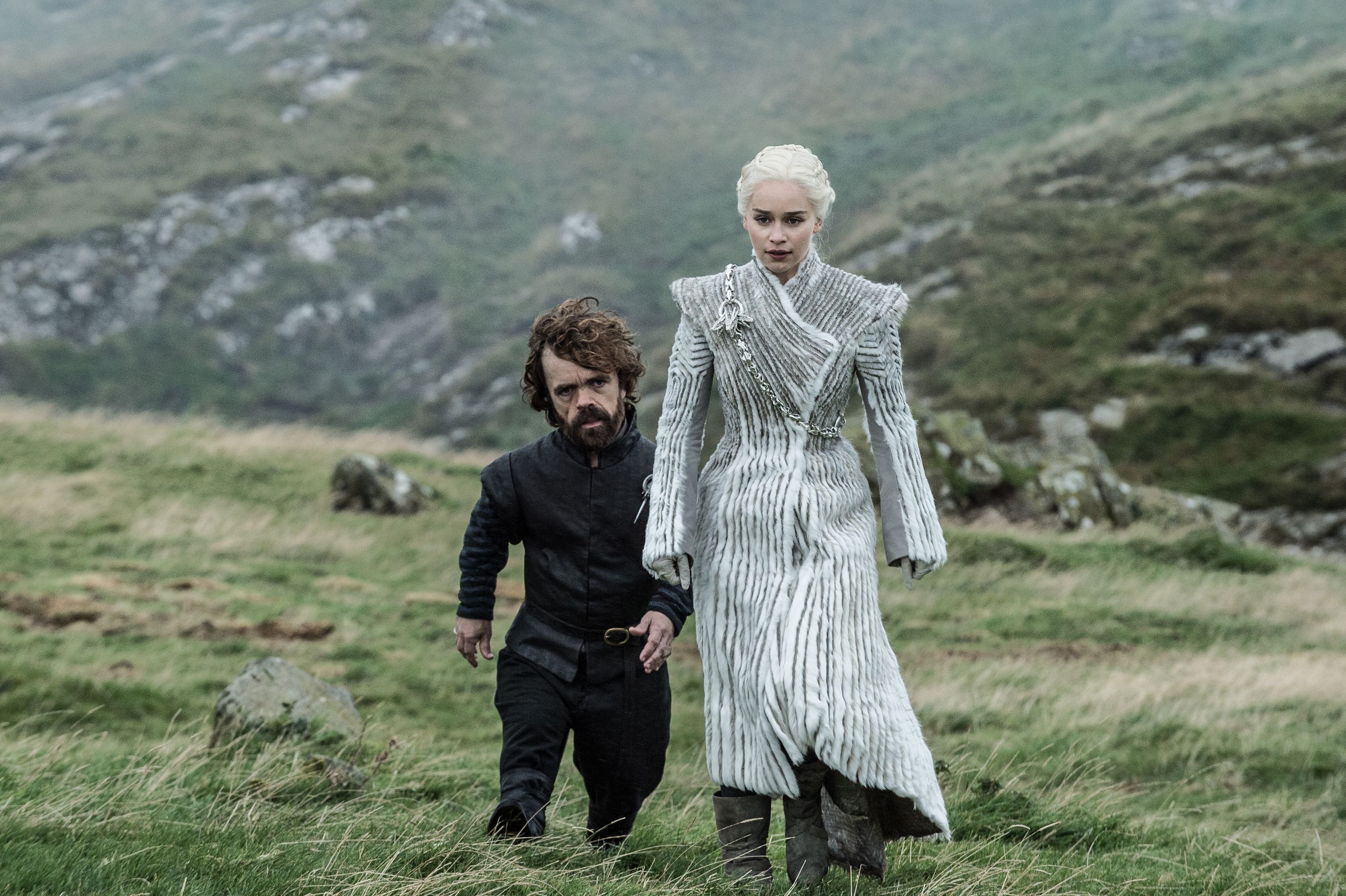 “Once we found the most effective way to do this each panel of the coat was created and then molded onto a base for strength. This whole structure was then mounted on to a corset-like base to make it secure and flattering. It is essential that a costume fit the actor perfectly and allow them to move with ease. The back panel was faux fur that we cut into to create the idea of a dragons back. It all took a very long time.”

Dany also wears the Dragon Chain as a substitute crown and symbol of her royal heritage. “I think as Dany has mentally and geographically gotten closer to her goal of ruling Westeros,” Clapton said, “I chose to design the silhouette of her costume to echo the style that her brother wore, the same style one supposes worn by her family that once ruled. She is also finally beginning to wear her house colors [particularly red]. It’s her belief that she has this absolute right to the throne, at any cost. We really are seeing Dany evolve.”

This Article is related to: Awards and tagged Emmys, Game of Thrones, Top of the Line