The "BlacKkKlansman" breakout was raised by one of the most famous movie stars in the world, but the younger Washington has found his own way forward. 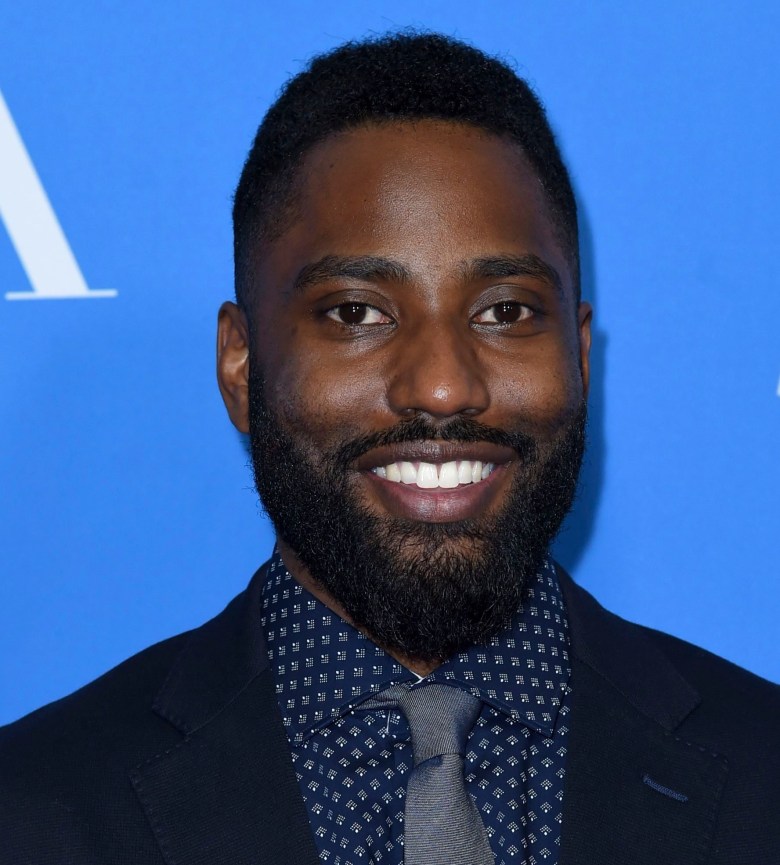 John David Washington remembers the first time someone called him the n-word. He was in Newton, North Carolina, where his mother has family. “I was 10 years old,” the actor said in a recent interview, to promote Spike Lee’s “BlacKkKlansman,” which marks the actor’s first lead role. “It was at this big parade they have there. He was a grown person, and he said it so casually. I didn’t feel anger. I didn’t how to feel at first. He was like, ‘Hey there.’ So casual. I only felt enraged later. Then, I wanted to kill him.”

That admission struck a marked contrast to much of Washington’s crowded press tour for the Cannes-acclaimed movie, in which he’s been flooded with more questions about his famous dad — Denzel Washington, one of the biggest movie stars in the world — than the actor’s own relationship to the material. But Washington has much to say about a story where he plays Ron Stallsworth, the real-life Colorado detective who impersonated a white supremacist on the phone with the Ku Klux Klan and infiltrated the organization by mimicking its language.

“To me, the big takeaway from this film was, this is what hate sounds like,” Washington said. “What that dude did to me was making it part of the regular vernacular, like this is how to communicate: ‘I’m not saying because I hate you, I’m saying it because it’s a fact.’ That’s dangerous, and that’s what this film displays.”

The attention-grabbing movie hits the zeitgeist, but it’s only one of several new Washington projects in the mix as the actor embraces the first big closeup of his career. As “BlacKkKlansman” continues to its expand its national presence following an impressive $11 million haul on its opening weekend — the anniversary of the Charlottesville riots — Washington’s own profile is expanding as well. The 34-year-old started his career in football, for NFL Europe and the United Football League, but the torn tendon that forced him into early retirement turned out to be a blessing in disguise.

At the 2018 Sundance Film Festival, he appeared in two U.S. competition titles, “Monster” and “Monsters and Men,” the latter of which found him playing a modern-day equivalent to his “BlacKkKlansman” character as a conflicted police officer who witnesses racism among his colleagues. “Monsters and Men,” which opens in September, provides a grave contrast to the ebullient, risk-taking hero of Lee’s movie; collectively, they cement the arrival of a major new talent. Washington, however, has been quietly building out his skills over the past several years.

“The most attractive thing about John was that he was relatively a fresh face in the independent film world,” said “Monsters and Men” director Reinaldo Marcus Green. When Green cast Washington, he was best known for a supporting role in HBO’s “Ballers,” his acting debut. “We hadn’t yet seen him in a dramatic role that could show his range as an actor,” Green said. “He was was someone that possessed a sense of familiarity without compromise. He had the right balance of the ‘it’ factor – recognizable but not distracting.”

Washington doesn’t look identical to his father, but his relaxed demeanor suggests a natural home in front of the camera. As Stallsworth, he’s at once snarky and committed, rambling in hate speech while charming white supremacist David Duke on the phone and tracking the KKK’s every move, while romancing a black power activist (Laura Harrier) in between jobs. He’s a striking embodiment of the movie’s two-pronged tone, which veers from empowerment to frustration over the perseverance of racism in American society. “I want to be around people that are just as enthusiastic about the process and storytelling as I am,” Washington said.

By the end of the year, the actor will appear in his third role as a police officer, in David Lowery’s upcoming Robert Redford heist movie “The Old Man and the Gun.” The actor, already enmeshed in his other projects, chased the role down. “When I heard from his agent that he was interested in reading for a part in the film, I’ll admit that I was surprised — it’s a tiny part, just a few moments in a large ensemble,” Lowery said. “I didn’t think that anyone would want to play it, but he was excited about taking a crack at it. I really liked his energy, but even more than that I admired his enthusiasm.” He told Lowery that he wanted to hang out on set to watch the crew at work. “Sure enough, he would be there on his days off, just sitting back on the set and watching,” Lowery said. “That sort of spirit is all too rare.”

The pair went go-karting together and grabbed coffee afterwards. “I was very clear that it was a tiny role and there would be many scenes where he might feel like there was nothing much to do, or where he’d be in the scene but largely offscreen. He got it, and here’s what he did with those scenes: without saying a word, he played them as if they were a close-up. He’d be deep in the set, flipping through a police file or listening to some other character rattle on about something. He doesn’t distract from the primary action, but if you pay attention to him, you see an actor doing good work.” For Washington, hanging out on “The Old Man and the Gun” set allowed him to observe a very different sort of movie star — Redford — than the one in his family. “He seemed like he loved it,” Washington said. “He just turned on this boyish charm, but he looked like that old movie star that we’ve grown up to know, for generations.” 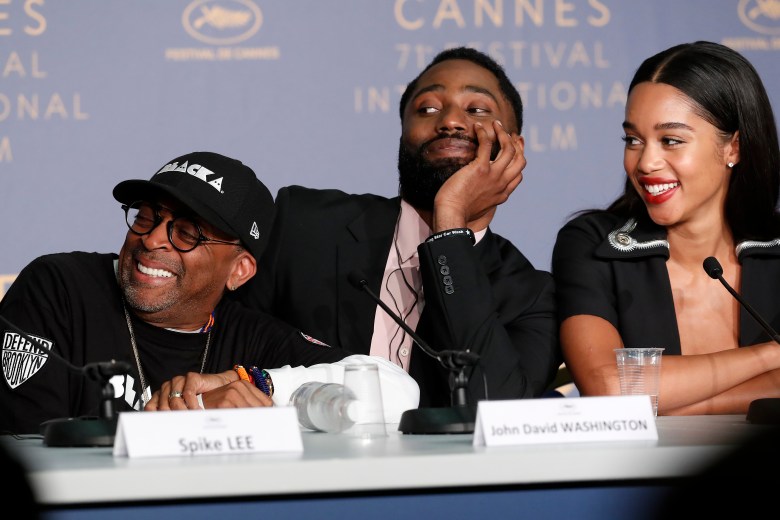 Washington prepared for all three parts by participating in ridealongs with Brooklyn police officers. “I had to learn what they have to go through,” he said. “There’s some men and women out there that are doing their job the right way. They’re protecting and serving complete strangers in their communities the right way. And it’s a thankless job. Obviously, there’s a lot of information out on cops not doing their jobs correctly, but the ones that are should be celebrated.” His enthusiasm for the movie’s ideas extended to his thoughts about Lee’s filmmaking as a whole. “I mean, we’re standing on Spike’s shoulders,” he said. “Even the documentaries. He’s given us people of color such a voice, and by being a part of this film, I feel like I’m a part of history.”

Lee’s cinema has been a presence in the 34-year-old Washington’s life for decades, at least going back to his 1992 cameo at the end of “Malcolm X” (he’s the kid in the classroom who shouts, “I’m Malcolm X!”). But they were never close. “He was a family friend, but I didn’t talk to him,” Washington said. “Believe it or not, Spike is a man of few words sometimes.”

Still, there’s evidence that the filmmaker was paying attention. When Green was sorting out casting for “Monsters and Men,” he used his ability as an NYU Tisch film alum to sign up for office hours with Lee, who heads up the graduate school of film and television. “Spike is a casting god,” Green said. “I asked him who he thought could pull off the role of an NYPD officer.” The filmmaker was in a good mood, editing the first season of Netflix’s “She’s Gotta Have It,” and didn’t hesitate. “Spike was laying on the sofa in his office — we were going through a list of potential names who could play the role,” Green said. “After a few seconds, he sits up and says, ‘I’ve got it, I’ve got it, John David Washington!’ It was as if a light bulb went off in Spike’s head — and he knew he could do it. When Spike talks, you listen.”

The filmmaker didn’t bother with an audition when it came to “BlacKkKlansman,” resurfacing in Washington’s life with an unexpected text message that read, ‘Hey, this is Spike, call me.’” Washington wasn’t sure what to make of it. “I didn’t believe him,” the actor said. “I thought maybe he was trying to get to my father or something.” Lee sent Washington the book that inspired the screenplay. When Washington signaled his approval, the actor recalled, Lee told him, “Alright, cool. See you this summer.” 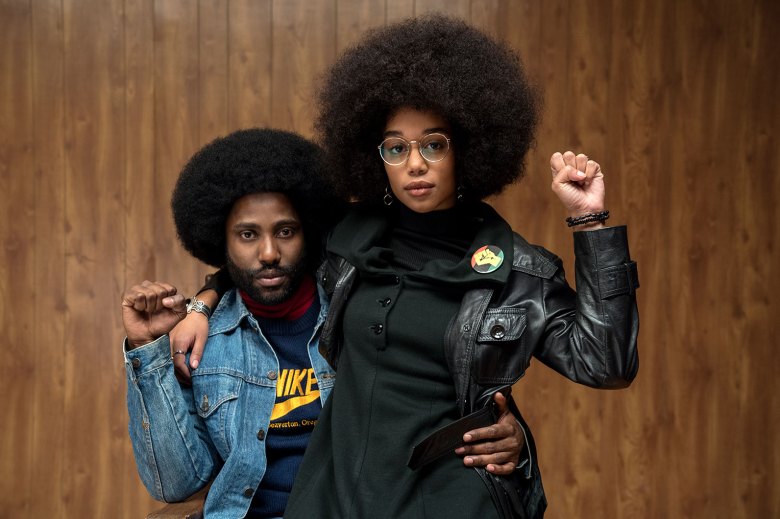 Washington grew up around his father’s productions, but never had to work on the set. “I was sort of behind the scenes,” he said. “I was Denzel’s kid.” The older Washington’s agent helped Washington score his role on “Ballers” after his early career in football fell apart following his injury. But “BlacKkKlansman” felt different. “I was there because of me and not because of, you know, nepotism,” he said. “Spike was like a little kid on set, on a daily basis. I’m still trying to find the actor I want to be, but I know what kind of the talent I want to be around.”

Despite the polemical undercurrent of “BlacKkKlansman,” Washington said he was more keen on the creative opportunities than any message-mongering that might motivate his choices. That much, he’s willing to admit, he gleaned from his father. “He never saw himself as this leading black artist or whatever,” Washington said. “He just wanted to make good films and stuff. So it was always about the material and who you get to work with, and that’s how I am.”