In this essay from the Locarno Critics Academy, recent experimental films provide a fresh way of looking at globalization. 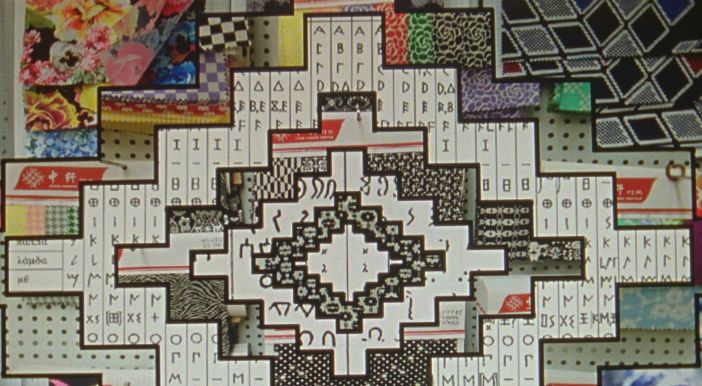 The following essay was produced as part of the 2018 Locarno Critics Academy, a workshop for aspiring film critics that took place during the Locarno Film Festival.

Film festivals give one a very particular perspective on world geography. Attendants of this year’s Locarno Film Festival, for instance, have access to delicately rendered portraits of communities in Chile, Lebanon, and Turkey that are remote even to most inhabitants of their native countries. The festival circuit can feel like a microcosmic society unto itself, a loose alliance of city states – Venice, Berlin, Toronto being a few leading names – wholly detached from any particular sense of place. Accordingly, it’s easy to see the passion for the local communities in an increasingly globalized world.

International film culture enacts a tension between the global and the local – one by no means unique to cinema. The punning title of London-born, U.S.-raised experimental filmmaker Jodie Mack’s “The Grand Bizarre” refers simultaneously to the distinctly regional markets where people hawk their wares and the broader economy in which these now exist. Mack spent five years making the film, traveling widely to document the textiles – clothes, rugs, and other fabrics, which provide the chief visual material of the film — while also catching snippets of everyday life. In addition to the landscapes, Mack interweaves the textiles with maps and images taken from a book of world languages, creating a dense system of patterns and signs, all of which are loaded with regionally specific meanings.

From these materials, it’s not difficult to imagine how Mack could have constructed a more or less straightforward treatment of her subject matter, guiding us along as these textiles are created then shipped out and sold, connecting them to their points of origin and showing how these various cultures both accord with each other and differ. Instead, Mack creates a radical disjuncture between these objects and their context, shooting them in flat, straight-ahead compositions that privilege pattern over provenance. The proceedings move to a wholly unnatural and at times ingenious rhythm of the filmmaker’s own devising, set to a soundtrack of bespoke pop tracks created by the director herself. 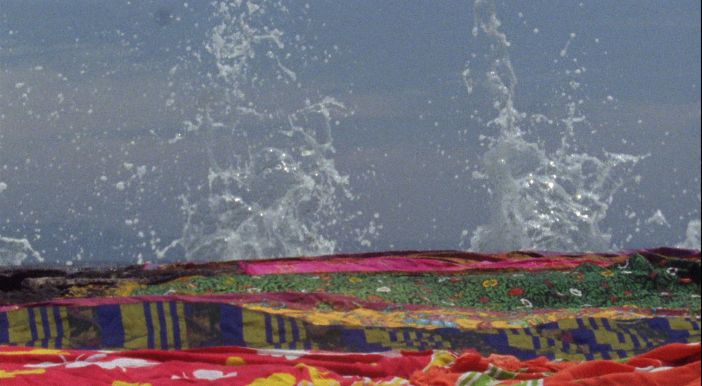 Speaking after the film’s premiere, Mack reflected on how the popularization of music production software has led to a certain standardization in music, whereby local traditions are crowded out by instantly recognizable recurring dance beats. Thus, her film plays ironic homage to the tunes that bestow upon hostels, cafes, and bars from Budapest to Bangkok a uniform atmosphere of nervous hedonism – nowhere more delightfully than in an EDM remix of the Skype ringtone.

Though Mack visited a dozen countries, these are only identifiable by signage and, depending on one’s knowledge of the subject, their textile cultures. The result is a distinct sort of anti-travelogue, fragmenting the world and reorganizing it according to a dense, systemic logic. The film moves along in its rhythmic rigor, its visual pleasures counterbalanced by the anxiety of never being quite able to entirely keep up.

If Mack’s film unfolds from the unfixed perspective of the contemporary traveler, Tulapop Saenjaroen’s “A Room With a Coconut View,” which was paired alongside it in Locarno’s vital “Signs of Life” program, is to some extent its inverse, firmly rooted in the popular Thai tourist town of Bangsaen, from which it warily eyes the constant flow of itinerant foreigners. Saenjaroen pointedly refers to “A Room With A Coconut View” as a video (as distinct from a film), and indeed takes as much stylistic inspiration from the screens one finds in offices and hotel lobbies as it does from those in movie theatres.

“A Room With A Coconut View” takes the form of a dialogue between two automated voices (performed by the kind of program that will read back your writing to you on Microsoft Word): Kanya, a computerized hotel service representative, and Alex, a Western traveler whose desired beach view in Thailand is obscured by palms, making for the titular “coconut view.” Their exchange takes the form of a friendly interrogation, with Alex pressing Kanya to explain to him everything from the town’s history (until somewhat recently, we learn alongside our virtual avatar, it was uninhabited forest) to the outsized role of a local crime lord (who mythologized his exploits in a feature film) to the physics of the ocean tides. Saenjaroen uses a mixture of documentary footage, text, animated graphics, and video effects to humorously illustrate Kanya’s lessons.

It’s not long, however, before Saenjaroen’s video begins to collapse onto itself. Kanya goes to sleep, whereupon Alex observes her “dream,” a surreal recapitulation of the first part, in which imagery first encountered as placid kitsch recurs in violent juxtaposition. Multiple shots jostle for space with each other and video effects within single frames, and at one point the screen begins to “bleed” (with a CGI blood oozing down the digital surface). After Alex wonders aloud whether Kanya’s dreams may have been programmed, the film segues into a new sequence, in which Alex’s position is analyzed by a new voice, named Tessa, who launches into a theoretical discourse on his mediated experiences. Are Alex’s perceptions of Thailand, we are led to wonder, really any less programmed than Kanya’s dream? Has the pursuit of experience become a formalized sort of work in and of itself?

It’s heady stuff to be sure, and one viewing is likely insufficient to fully absorb the nuances of Saenjaroen’s dense, essayistic work. In the context of a film festival, however, it makes intuitive sense, as one passes the days searching in a regimented way for that elevated aesthetic experience that will justify the whole shebang. The possibility of perceiving the reality of life in other parts of the world will remain one of the primary attractions of international cinema, but in this context the sharp skepticism of Mack and Saenjaroen’s films is vital, challenging, and even healthy.