TCA: Landgraf said FX Networks' subscriber base has grown thanks to virtual cable bundles — flying in the face of the "cord cutting" narrative. 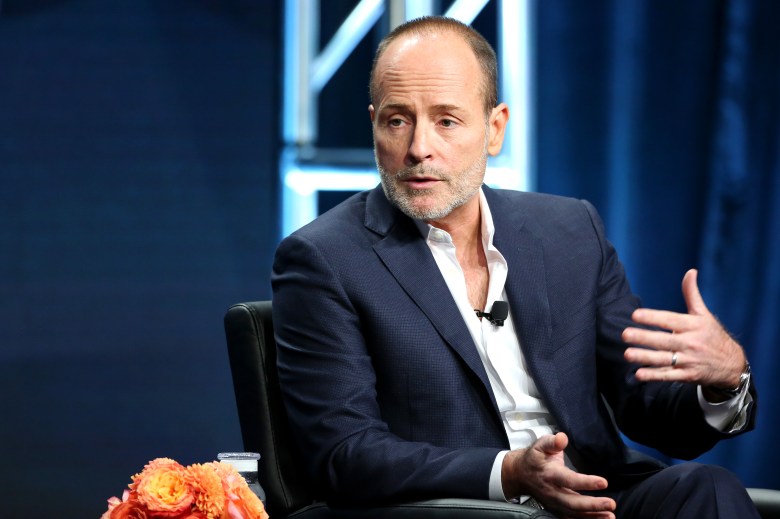 As HBO ponders expanding its volume of series, FX is also looking to grow its programming stable beyond just drama, comedy, and limited series. FX Networks CEO John Landgraf, who has often lamented the state of “too much TV” in these peak times, admitted Friday to reporters that “the number of series I’ve seen announced just this week, including ours, alone makes me suspect that the ‘Golden Age of Television’ has become the ‘Gilded Age of Television.'”

Like HBO programming president Casey Bloys, who assured reporters at the TV Critics Association press tour that HBO is cognizant of maintaining its quality brand while expanding its offerings, Landgraf said FX continues “to be deliberate focused and specific about our brands even as we expand the scope of our programming.”

“We hope you will feel we’re making sincere efforts to have the FX brand actually provide value to consumers who are trying to navigate the vast sea of options with the highest quality programming,” he said. The network currently releases around 15 series each calendar year, but Landgraf is looking to increase that output by branching into factual programming, increasing output in animation and exploring additional genres.

“We and HBO remain almost exclusively focused on the best in TV quality as we invest in programming,” he said. “As happy as we are with our batting average its clear that to move beyond the 50 or so nominations we’ve been getting and closer to the 100 or so like HBO and Netflix, it’s clear we have to produce more than three categories.”

Meanwhile, Landgraf — who issues a “Peak TV” tally at the end of the year — shared his midseason report, noting that there have been 319 scripted series so far, up 5 percent from 305 last year. Here’s the chart: 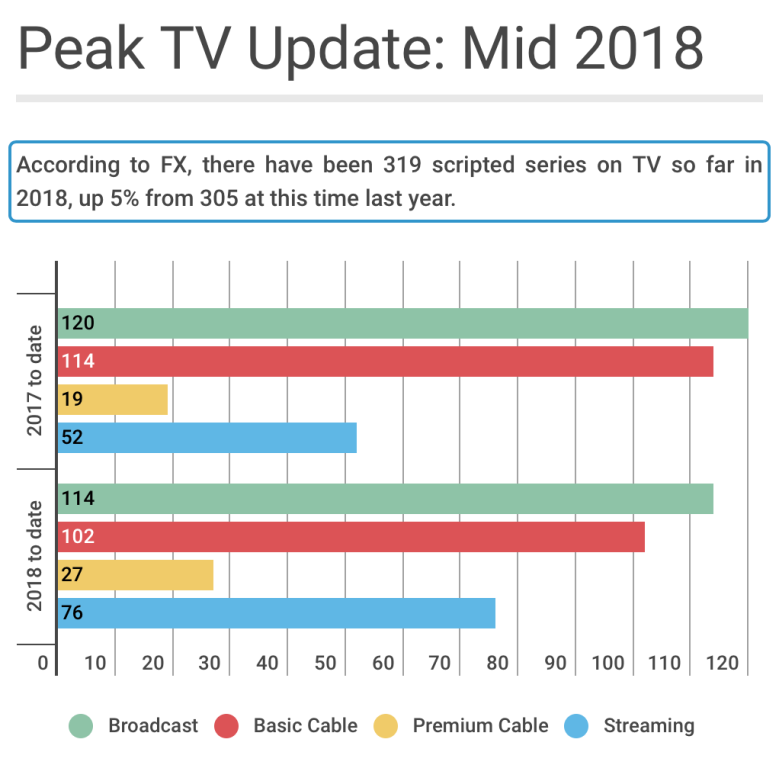 “My earlier estimates that peak TV would have peaked are wrong now,” he said. “It’s a ways away. You can start to see channels beginning to scale back scripted, a little bit and scale up their efforts in live.”

But Landgraf said he remains worried about too much TV — expanding on that notion, however.

“In many ways, that’s too narrow,” he said. “There’s too much story, too much narrative.” Landgraf pointed to “Taxi Driver” screenwriter Paul Schrader’s concerns about “narrative exhaustion.”

“We’ve all seen so many stories from every conceivable medium,” he said. The explosion in content allows for innovation and diversity, but “it’s hard if you’re trying to surprise and delight the audience. Everything feels vaguely familiar to them, that’s something that we struggle with a little bit.”

And then, while announcing its commercial-free FX+ service will now be available to all cable subscribers, Landgraf also noted that FX Networks’ entire subscription base, across FX, FXX, and FXM, is 233 million U.S. subscribers. That’s up by several million subs from last year, he said.

“That flies in the face of a widely held narrative that cord cutting is accelerating and everyone is bailing from the multichannel bundle and heading to streaming services,” he said. “I’m not saying cord cutting is a myth, but what I am saying the rapid growth of Virtual MVPDs, cord cutting has actually decelerated over the past year. FX Networks seeing growth because our channels included on almost the entire virtual MVPD universe.”