ABC, NBC, CBS and Fox have renewed their deal to telecast the Emmys for eight more years. But what about making the show more watchable? Maybe Lorne Michaels has the answer. 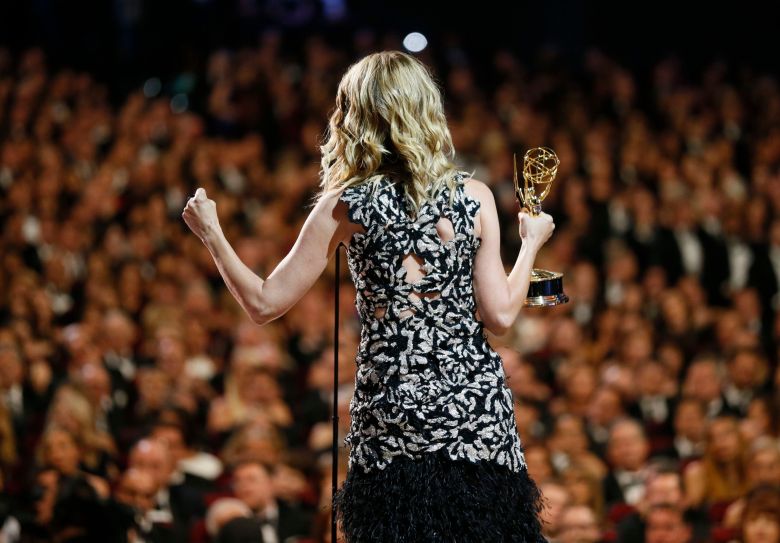 Laura Dern at the Primetime Emmys

UPDATE, Aug. 6: ABC, CBS, Fox and NBC have signed a deal with the TV Academy to televise the Primetime Emmy Awards through 2026.
The telecast will continue a “wheel rotation” with each of the four broadcast networks, beginning with Fox for the 2019 telecast and continuing with ABC, CBS and NBC, respectively.

Clearly, the Oscars need to do something about that — which is its own, separate debate — and find new ways to quicken the pace. But that debate involves how to juggle craft awards on the telecast. At the Primetime Emmys, the Below the Line awards are already relegated to the Creative Arts Emmys, which were split into two ceremonies several years ago in order to accommodate all of those awards.

That’s why Emmy producers face a more daunting challenge when it comes to paring down the show. The Primetime Emmys must juggle entertainment with the need to honor actresses, actors, supporting actresses, supporting actors, directors, writers and series from genres including comedy, drama, limited series, variety/talk, and variety/sketch.

Past attempts to streamline the Emmys have been a mess. In 2009, the Directors’ Guild and the Writers’ Guild balked when the TV Academy revealed a plan to pre-tape award presentations in eight categories before the show. The idea was to still show the winners, but edit out the time they take to get on and off the stage — which would save several minutes from the telecast.

But the DGA and WGA allow the TV Academy to show clips from nominated series for free on the telecast — and they threatened to revoke those waivers under that plan. Another plan — to hand out trophies to winners in their seats — was also nixed.

The Tony Awards actually do something similar to that, handing out some awards in the hour before the live telecast, and also during commerical breaks, and clips of those winners are then shown during the telecast.

Less likely is the idea of rotating different awards on and off the show each year. Per Academy guidelines, the telecast has to maintain parity among key branches, including the writing, directing, performing and producing categories.

It’s unclear if changes that were a nonstarter 10 years ago might be more willingly accepted by the guilds this time around.

A change could come this year, with next month’s ceremony. As reported by Deadline and Variety, the Big Four networks’ new $8.25 million annual contract to continue airing the Emmys comes with a big request: the concerted effort by the Academy of TV Arts and Sciences to strike a compromise with the guilds.

But there’s no easy answer, as some of the key writing and directing categories also include household names — the kind that might attract audiences as well.

The last two Emmy telecasts have hit viewership lows for the telecast, including 11.4 million for the 2017 ceremony. This year, with “Saturday Night Live Weekend Update” anchors Michael Che and Colin Jost hosting the Primetime Emmys on NBC, “SNL” executive producer Lorne Michaels will be more involved — and as a master of producing live TV, perhaps he has the answer.

Here’s what’s slated to be handed out during this year’s Primetime Emmys, airing Sept. 17 on NBC:

This Article is related to: Awards and tagged DGA, Emmys, WGA