Also, the host shares a few segments beyond "A Closer Look" that best encapsulate what makes it one of the most reliable shows in the late-night world. 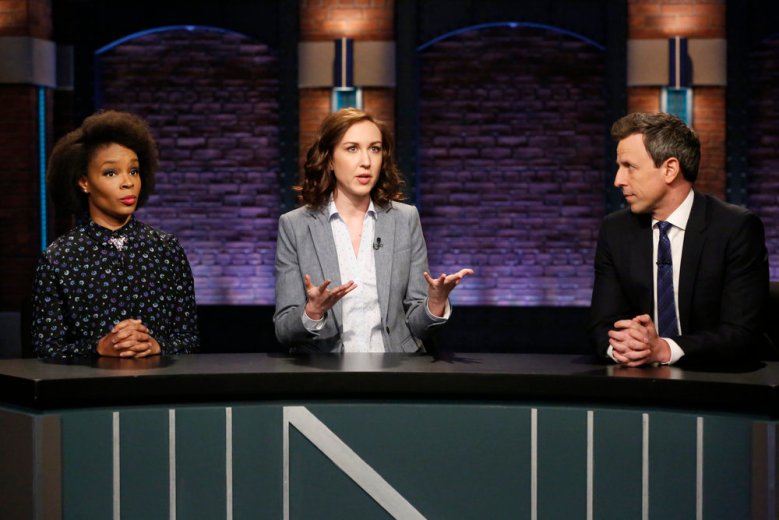 Celebrities are a key part of the talk show formula, but there’s another group of guests that have inspired Seth Meyers the most since he took over NBC’s “Late Night” franchise in 2014.

“I think our favorite of the third guests, genre-wise, would be fiction authors,” the “Late Night with Seth Meyers” host told IndieWire. “There’s a nice bit of freedom with being at 12:30. It’s necessitated by the fact that there are a lot of options for movie stars as far as which shows they want to go on. They can’t be everywhere at once. And then that means that you can be a little bit more creative when it comes to a third guest.”

In a crowded late-night landscape, getting creative has meant approaching the same daily news in different ways. Separating from the norm is one reason why, despite the runaway success of the show’s “A Closer Look” segments, politicians probably won’t figure more strongly than usual into the “Late Night” plans as the show approaches November. Look for Meyers and the show’s writing staff to use the rhythms of the various midterm election campaigns to their advantage, not necessarily straight from the people involved.

“Talking about politics is more fun than talking to actual politicians. The problem I found is, especially during elections, I feel like people really stick to their script and what’s poll-tested,” Meyers said. “The worst thing they could take away from it is some kind of gaffe that sticks to them. To be honest right now, a sitting senator would be more interesting to me than somebody who’s running for something. But even then, I just haven’t been able to crack how to make it not ‘Meet the Press.’ They know exactly where to bring their hand down on the table and exactly when to put their hand on your shoulder. And so you feel a little bit like a prop.”

Luckily, “Late Night” has found no shortage of delightful material in its own writers’ room. Nominated for an Emmy in the Outstanding Writing for a Variety Series category, it’s a testament not just to what’s come of that room, but how “Late Night” has put those writers front and center. Amber Ruffin and Jenny Hagel have become fan favorites in the same way that featured players would become stars at “Saturday Night Live,” Meyers’ old home.

“I always thought that strength of my era of ‘Weekend Update’ was how great the features were,” Meyers said. “I was always happiest during ‘Update’ when people were laughing. I didn’t care if it wasn’t me or if it was Bill Hader or Kate McKinnon or Kenan Thompson. And so that was a total carryover from ‘SNL.’ It took us awhile to figure out the best way to present those voices and I think for writers who hadn’t been on television before to figure out the best way to present themselves. But that was always the goal.”

Now with “Jokes Seth Can’t Tell” as a marquee “Late Night” feature right alongside the regular “Closer Look” segments, Ruffin and Hagel don’t have to be part of a parody or do an impression to take center stage.

“Originally we thought, ‘You know, it’ll be great. Amber will be able to play characters I can’t play.’ And what it’s turned into more is, ‘Oh, Amber can share a point of view that I don’t have.’ I think we didn’t quite realize that it would be their voices that would be more valuable than their range,” Meyers said.

Read More: Give Amber Ruffin Her Own Show: ‘Amber Says What’ on ‘Seth Meyers’ is the Segment Late Night Needs

The best part about the rise of those new popular segments is that they can exist right at the top of the show, when “Late Night” has the most eyeballs and the audience is primed to see a new bit. Still, the show has succeeded in crafting some quality comedy setups in its more experimental acts. Sometimes the most memorable “Late Night” moments come when the show veers off-course — just bask in the glory of something like “Late Night Casserole” or the escalating madness of “Popsicle Schtick.”

“The beginning of the night is when, as an audience, you’re judging if you’re there on a good night. And so that’s why you put your stuff that people expect. They’re happy to be there on a night with ‘A Closer Look’ and then they know there are going to be interviews,” Meyers said. “So then in the fourth act you can say, ‘OK, here’s this dumb thing one of our writers came up with.’ At that point they’ve already decided they were there on a good night. I don’t think they’re judging the back end of the show the same way, so it’s nice to have kind of figured that out.”

When asked where he might suggest new viewers start, besides the show’s two most popular recurring features and the always dependable “Amber Says What,” Meyers pointed to some of the “Late Night” bits that have taken a time-tested formula and added a distinct, weird flair.

“I still like what I would say are evergreen, any-era late-night bits like ‘Back in My Day‘ or ‘At This Point in the Broadcast,'” Meyers said. “‘Joke Bucket‘ is also a lot of fun. It is one of those things that is better when it’s looser, because I go out to rehearse and I’m like, ‘What are we doing? Why on earth are we still doing this impossible thing to remember?'”

Even the out-of-the-studio time with celebrities forces the team to think of how best to configure the segment’s constraints to get the best material. Meyers and executive producer Michael Shoemaker had this great memory from one instance of “Day Drinking.”

“It won’t surprise people that I spent a lot of time in my head and I’m an overthinker and so ‘Day Drinking’ is the absence of that,” Meyers said.

“No one’s thrown up yet, but Seth is drunk so fast,” Shoemaker said. “And with good reason! He really downs a lot.”

“You know, you only have somebody Kelly Clarkson for two hours. So you can’t build a buzz slowly,” Meyers said. “It takes a physical toll. I was fully asleep on the roof of The Standard hotel last time.”

“He texted me after and said, ‘I forgot to say goodbye to Kelly Clarkson!’ I said, ‘You said goodbye to her four times.'”

Even with all those complex demands of a late night show, the genre is more saturated than ever. As each network looks for its own viable series and the number of shows have increased, Meyers still points out that this isn’t exactly a new trend.

“That was what people were saying when I got the show in 2014, ‘Don’t we have enough of these?’ And I feel like there are twice as many now,” Meyers said. “The nice thing about them is you can just have the one set, you can do a bunch of them, and the longer you do them, the better people get at doing them. Hopefully it’ll at least stay a business model for the next 20 years. That’s what I need. I need 20 more.”

This Article is related to: Awards and tagged Emmys, Late Night with Seth Meyers, Seth Meyers