The Australian actress also tells IndieWire how she had to learn to roller skate for the role, because Jean-Marc Vallée was inspired by a Hiro Murai music video. 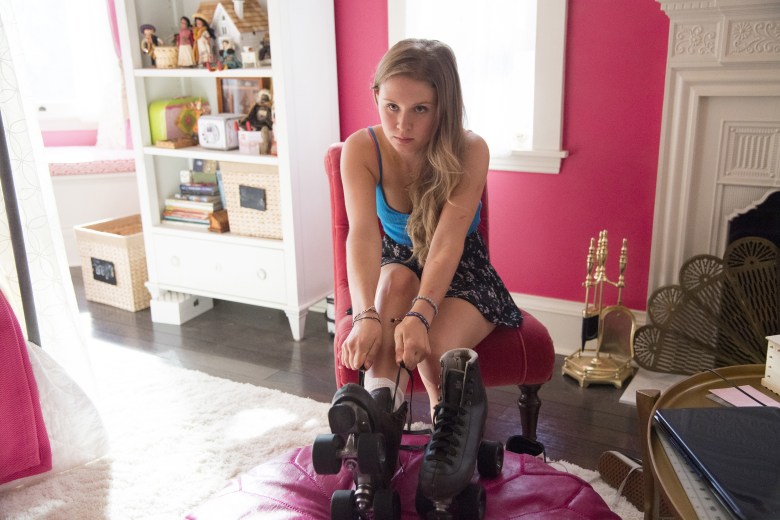 The actor behind one of the summer’s most fascinating characters has a bit of a secret. Before being cast in HBO’s “Sharp Objects,” “I had never roller skated in my life,” Eliza Scanlen admitted to IndieWire.

This might be a bit of a surprise, given that central to the initial introduction of Amma is the fact the young lady moves fast, gliding through the small town of Wind Gap like a rebellious breeze thanks to the wheels on her feet. But if you don’t know much about Scanlen, it might be an even bigger surprise to learn the reason why she hadn’t learned to skate previously: The 19-year-old actress is from Australia.

“It was never common in Sydney,” she said. “I mean, at this time. I used to ice skate at parties when I was eight, but that was sort of the extent of roller skating, ice skating, that kind of sport. So getting on roller skates was hard.”

However, director Jean-Marc Vallée had a very specific bit of inspiration on his mind: the music video for Chet Faker’s “Gold,” directed in 2014 by Hiro Murai (who is of course now one of the Emmy-nominated forces behind “Atlanta”).

You can watch Murai’s video above, a striking and eerie scene set on a highway deserted but for the singer, and of course the girls on wheels. “These girls are professional roller skaters, and they’re doing all sorts of impossible tricks,” Scanlen said. “And [Vallée] said that was his inspiration, and he wanted us to roller skate exactly like that. So I guess that got my butt moving.”

World champion roller skater Trey Knight was brought on to help coach Scanlen as well as the actors playing her friends. “For about a month before shooting, I was roller skating every day and doing classes every day. We all roller skated together, and it was a nice bonding experience too, and a way for us to become friends before we got on set,” she said.

The chain of events that led to Scanlen starring in an HBO prestige drama, on eight wheels, began as it often does with an audition. But a major factor in her getting that opportunity was series star and executive producer Amy Adams, who asked for a voice in casting.

Adams gave the whole team a lot of credit for letting her speak. “[They were] really wonderful, really trusting my voice, and that’s given me a lot of confidence. It actually spurred me to want to do a lot more producing, because I really enjoy being a part of the solutions,” she said to IndieWire. “A part of the bigger picture is much more interesting to me than just bringing attention or focus on myself or my character. I’ve always cared about the bigger picture, so it’s nice to be able to use my voice in that way now.” 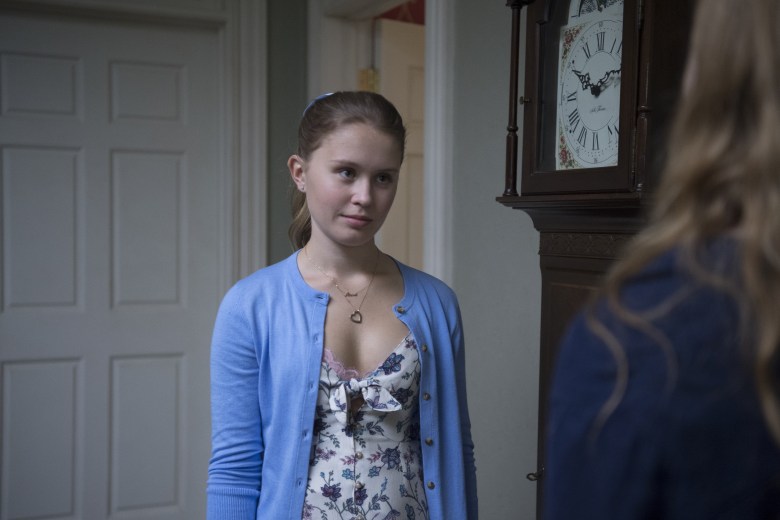 And during the casting process, Adams and Vallée had a difference of opinion. “He really wanted this one girl for Amma, who was very, very good,” Adams said, “But I said, ‘Is it okay if we read girls? Because so much of what it’s going to be is the chemistry.’ So we were then able to read, and we found Eliza.”

At the time, Scanlen was still finishing high school and working to complete Australia’s Higher School Certificate. “That’s what I really wanted to focus on that last year because I did want to be an actor, but sometimes it doesn’t work out,” she said.

But while she wasn’t that focused on acting at that time, she got the “Sharp Objects” casting call. “Obviously I was excited by that,” she said. “So I sent through a self-tape, didn’t really think anything of it, and then they toured casting in Sydney.”

(As a side note, here’s Scanlen’s advice for a good self-tape: “I find it really helpful to have a reader that you use frequently,” she said. “Because I feel like it’s a bit of a feat in itself having to swap readers constantly when you’re doing a self-tape because there’s that hurdle you have to get over of kind of breaking the ice. My mom usually does my self-tapes, and we’ve built a kind of shorthand with one another… Also, just having fun with it and not feeling restricted in your space and giving yourself enough space filming the shot to move around, things like that. There are so many little tricks that you learn if you just keep on practicing and practicing.”) 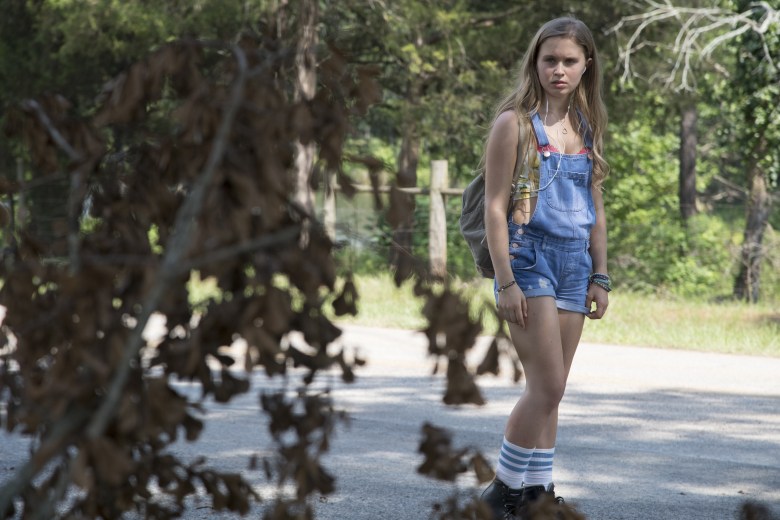 Scanlen wasn’t confident about her performance during the follow-up audition. “It was probably one of the first auditions I did of the year,” she said. “So I was not warmed up, you could say. I was a little rusty because I’d just been focusing so much on school. So I walked out of it not feeling too happy about it, and that’s always a great feeling.”

She was later told that she’d made the casting shortlist for the role, something that made her happy (for the record, she was also “really happy” with how her test results for the HSC came out). And that led to being flown to Los Angeles to read with Adams.

And that experience was what convinced Adams that Scanlen was right for the role. “She, in the room, wasn’t thrown by anything,” Adams said. “And Jean-Marc works like… stepping on a set, it’s like you’re launched out of a cannon, and you just sort of fly through the day, and then you’re done, and you have to have a lot of confidence and a lot of maturity. Eliza just has that kind of maturity that completely doesn’t make sense for her age, which I’m always jealous of, because I’m a decade-plus older than her, and I’m still just developing that kind of self-assuredness.”

From her perspective, Scanlen said, “There was a lot of anticipation. And you sort of have this idea in your head about how you’re going to go about the audition, and as soon as you get there, all of those thoughts just kind of drop away and you realize you’re standing in front of Amy Adams, whom you’ve admired for years and years. That was the first time that I was ever really starstruck in my life.”

Fortunately, “It took only a matter of seconds for it to pass,” she said, “And she just knows how to make someone feel comfortable. And when we were doing the scene, we went over two scenes, and the focus of the audition was really just to play around and be spontaneous. So I had to get pretty tactile with Amy and I only just met her, and it was just a very surreal experience. But I think that she’s just so good at making you feel comfortable and setting an atmosphere, especially on set. She really took control of that and she made sure that it was a comfortable environment for people to work in, especially for the young actors on the show.” 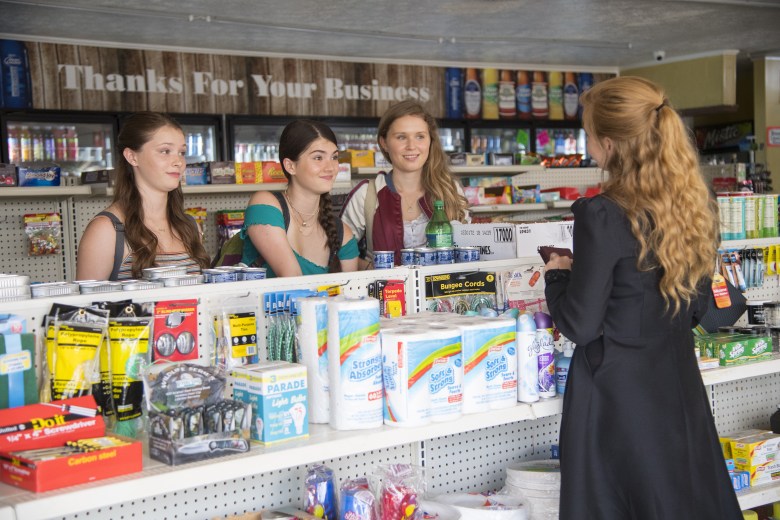 Scanlen noted that part of her time in Los Angeles for the audition included a hair and make-up test “because they didn’t think I looked young enough. They refused to tell me if other girls were doing it. So there was a lot of suspicion and tension. We didn’t know how it was going to turn out, really.”

Once cast, there was another challenge to face: not just performing with an American accent, but a very distinctive one. Fortunately, that proved to be a blessing. “All of us, in the end, had to have a dialect coach on set because the dialect was very specific,” Scanlen said. “It was called a Southeastern Missouri accent. So I wasn’t the only one, thankfully. We were all in it together… We’re all practicing with each other. We had this phrase we always used, we’d say: ‘405.’ Just the 405, but we’d do it in the accent to get us into it. Amy taught me that one.”

In the thick of production, Scanlen appreciated the opportunity to work with costume designer Alix Friedberg to reveal Amma’s duality as both dutiful daughter and rebellious teen. “I remember having fittings, and we would put on a skirt and it would sit just above my knee, and we’d think, ‘Nope, that’s too long.’ And literally, we’d get out scissors and just hack around the edges until it went way higher up my thigh. So that was fun,” she said. “It was nice to be able to have a say in what I wore and what I think Amma would wear. I think having that say and that input always helps you feel closer to the character.”

Because, ultimately, playing Amma really taught Scanlen “a lot about myself as an actor and where I’m willing to go as an actor and what my obstacles are,” she said. “And I think I’ve really taken on those obstacles and tried to break them down because I think it’s really important to keep training, even when you’re working…With texts that frighten you, I think they teach you a lot more about your strengths and weaknesses as an actor, and it’s been more helpful than anything.”