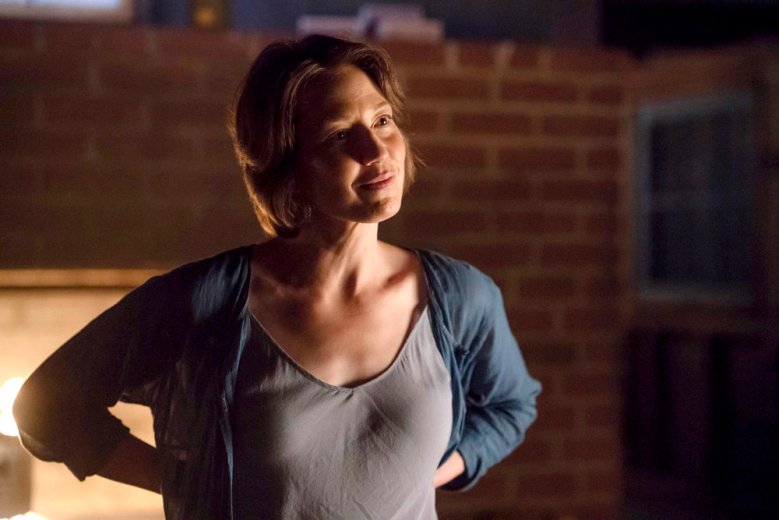 “The Sinner” has been known to feature any number of disturbing scenes, but Wednesday’s episode also included a sequence that was more baffling than anything else.

In the scene, Emmy nominee Carrie Coon cycles through a series of emotions with only a giant rock as her scene partner. As Vera Walker, a concerned mother whose son has been accused of murder, she turns to a means of solace that others in her commune, Mosswood Grove, use. She appears to be doing what looks to be yoga at first, alternating cat-cow pose with breath work, but then she also begins to cry and wail. When she’s done, she walks over to the towering rock and then puts her hands on it.

IndieWire turned to showrunner Derek Simonds for answers to this mysterious behavior.

“It’s some kind of exercise,” he confirmed. “We don’t have a name for it. I personally do a kind of work that’s based in Jungian psychology, and so some of that has informed what we see Mosswood residents do, although I can’t condone some of the stuff that you will see in the season. The idea of Mosswood is that they do this psychological work that’s about engaging parts of yourself in your psyche that you don’t normally come into contact with: more primitive states, more exuberant states, more joyful states.

“We’re seeing a moment of Vera working through her emotions and her pain and her frustration at having her son taken away from her and what’s happening in her life,” he continued. “She’s doing it in this space at the commune where they do this work before this rock that I think kind of becomes a totem for them. Carrie’s performance is really compelling, and Vera’s clearly working something through. It might be off-putting and a little alienating I think for people, but I think also there’s something very honest about it. I’ve been trying to play with Mosswood as being a place that really could hold answers for people. This isn’t just a scary group of people on the edge, but maybe they’re onto something.” 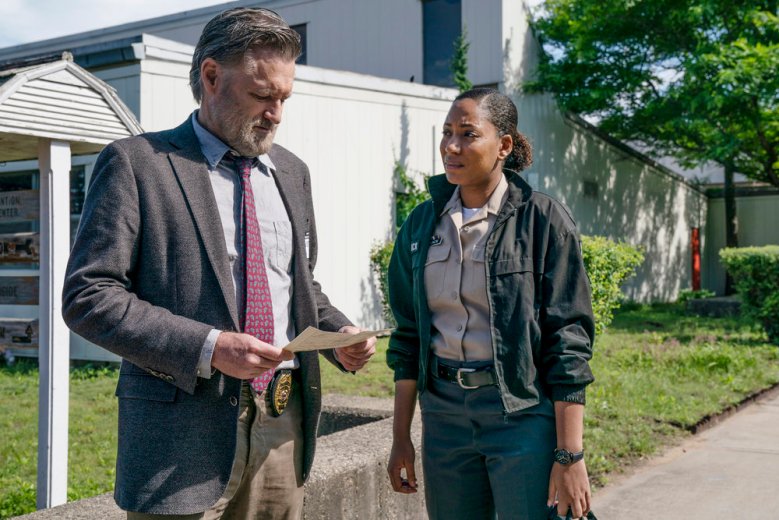 Throughout the season so far, Mosswood hasn’t been depicted in the most sympathetic light. Det. Heather Novack’s (Natalie Paul) friend Marin (Hannah Gross) got involved with Mosswood, decided to join the group, and then mysteriously disappeared. And that’s just only one example of why the people of Keller treat Mosswood with suspicion. In Vera’s case, she believes that’s why her 13-year-old son Julian (Elisha Henig) has been arrested and set to be tried in adult court.

“The other thing that I was excited about with Mosswood was being able to talk about the way we demonize certain communities without knowing enough about them, which felt very potent to talk about today,” said Simonds. “That sort of ‘us vs. them’ mentality that our political discourse has fallen into. It was a way to bring up and explore issues like that without a heavy hand. What is the correct way to live one’s life and by what values? And here’s a community that’s chosen a particular way to do that.”

Although Vera is wary of Det. Harry Ambrose (Bill Pullman) and even warns Julian not to trust him, she might be coming around a little. In a quick aside, she mentions that she dug into Harry’s background and heard about his previous case with Cora Tannetti (Jessica Biel), the young mother who had stabbed a stranger to death on a beach in Season 1. Although Harry’s presence is a clear connector between the two seasons, it wasn’t made explicit until now that this takes place directly after that case. Beyond just nodding to “The Sinner’s” first outing though, Vera mentioning the Tannetti case has greater significance.

“That moment where she brings up the Cora Tannetti case and you realize she’s done a little background research on Ambrose, I think, signals that Vera is starting to see that Ambrose isn’t just a detective or a law enforcement officer who’s trying to put them away and put Julian away and punish Mosswood, but that he actually has a history of going out of his way to help seemingly guilty parties like Cora Tannetti,” said Simonds. “On the one hand, it was also fun just to capitalize on the history of the show and sort of remind viewers, ‘Oh, he did do kind of a similar thing with Cora and now he’s connected with Julian.’ From Vera’s perspective, I think she recognizes that Ambrose might actually be helpful to her, rather than an antagonist. It’s actually a pivot point in our story you’ll see in Episode 4. Dun dun! The relationship will continue to develop in certain ways.” 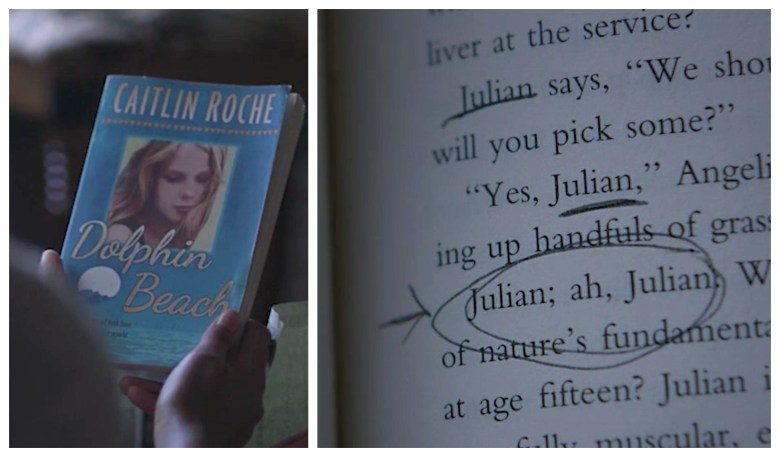 Two big surprises come made by the end of the episode, and the first is that Julian may not, in fact, be the son of Vera but the son of Heather’s friend Marin instead. As Heather is going through a box of her friend’s belongings, she comes across a novel called “Dolphin Beach” in which the name of a character, Julian, has been circled and underlined several times.

“We wanted to create a kind of disposable young adult novel that Marin as a younger girl just loved and was obsessed with, maybe it was like a series,” said Simonds. “A romantic series like the ‘Twilight’ books or something like that. It’s called ‘Dolphin Beach.’ I think it takes place in the Florida Keys and involves a summer romance.

“It was this idea that in her infatuation with this book and this world and this main character — maybe the love interest of this protagonist girl was named Julian — and she loved that name and was attached to it.”

The implication, of course, is that Marin must have become pregnant during her stay at Mosswood and given birth to a son, whom she named Julian. How she disappeared, and he came to be Vera’s charge is still in question, however.

In trying to get to the bottom of the mysterious circumstances of Julian’s birth, the two detectives visit the obstetrician, Dr. Sheldon Poole, who signed the birth certificate. Although he initially appears to answer their questions willingly — he reveals that he was called into Mosswood after the birth, not to attend it — he makes an excuse to leave the room to look up records. But when his prolonged absence is noted, they find him dying from a self-inflicted scalpel cut to the jugular.

Simonds confirmed that Poole did indeed kill himself, but couldn’t reveal more than that just yet.

“Yes. [Why he killed himself] is in Episode 4,” he said. “We’re going to unpack some of that. There’s some answers to that a little down the pipe as well. That just becomes one more layer on all of this.”

One of those layers is hinted at in the final scene where Harry shows Heather what he discovered upstairs in the doctor’s home: a miniature replica of the Mosswood stone.

”The Sinner” airs Wednesdays at 10 p.m. ET on USA Network.

This Article is related to: Television and tagged Derek Simonds, The Sinner, USA Network