Asian guys need love too, especially after being desexualized in the media. 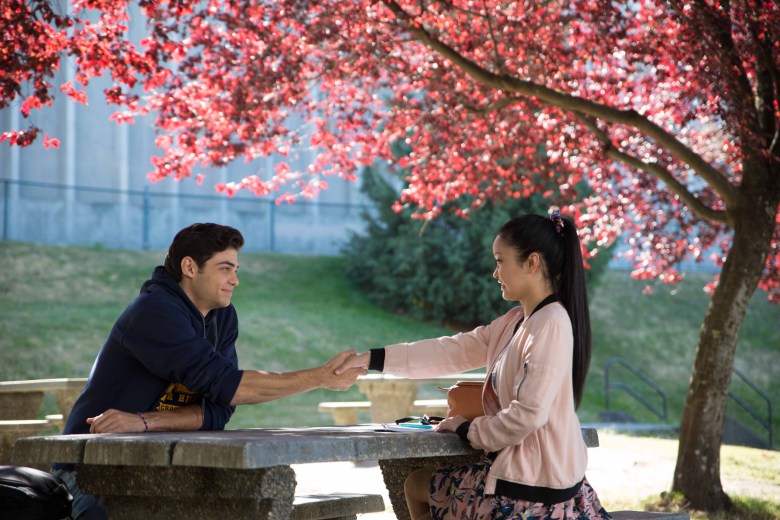 August has been a heartening month for Asian representation on screen, ranging from “Crazy Rich Asians” and “Searching” at the movies to the American arrival of the Canadian series “Kim’s Convenience” on Netflix. The streaming service has also released “To All the Boys I’ve Loved Before,” a teen rom-com featuring an Asian-American female protagonist and her family. Despite this, some are not thrilled that of the many featured love interests in the story, none are Asian.

IndieWire spoke to author Jenny Han, whose novel is the basis for the movie, about the criticism of excluding Asians boys from the narrative.

“I understand the frustration and I share that frustration of wanting to see more Asian-American men in media,” she said. “For this, all I can say is this is the story that I wrote.”

In the movie, bashful Lara Jean Song Covey (Lana Condor) is a high school junior who’d rather swoon among the pages of a bodice ripper than confess her tender feelings to a boy. But that’s exactly what happens when love letters she wrote to five crushes — but never meant to send, much less be read by her objects of affection — are mysteriously mailed off.

Han’s novel doesn’t spell out the race of each of the characters, but some of the descriptions (i.e. blond hair) and the names read as typically white: Josh Sanderson, Peter Kavinsky, John Ambrose McClaren, Kenny Donati, and Lucas Krapf. Furthermore, in the movie, four of the five boys are portrayed by white actors, while Lucas Krapf is renamed Lucas James and portrayed by black actor Trezzo Mahoro. Having set a precedent for race-bending, the movie could have done the same to diversify Lara Jean’s other crushes, including casting an Asian love interest.

Lana Condor and Israel Broussard, “To All the Boys I’ve Loved Before”

While casting Asian actors in non-stereotypical roles is important for representation, it’s especially significant when Asian men are cast in romantic roles to counteract the history of Western media portrayals that have desexualized and emasculated them. Lately, the casting of an Asian male romantic lead has been slowly on the rise as evidenced by Henry Golding in “Crazy Rich Asians,” Vincent Rodriguez III in “Crazy Ex-Girlfriend,” Hayden Szeto in “Edge of Seventeen,” John Cho in “Selfie,” and Ricky He in Disney Channel’s “Freaky Friday,” just to name a few.

That’s why it’s discouraging to see an Asian author perpetuate the narrative of only white men being attractive, and by exclusion, that Asian men are not. Of course, the onus isn’t and shouldn’t be completely on Han to represent all Asians. The fact that her book is the basis of one of the few Asian-led rom-coms out there, however, puts the focus on her, and it’s a responsibility that Han takes seriously.

“There are so many people that want to tell stories. I think that the issue is how hard it is to get your foot in the door to tell your stories,” she said. “For me, I just want to support people in telling the stories that they want to tell, and I would hope that with this movie and ‘Crazy Rich Asians,’ that if it does well, then we’ll get more.

“More means more representation, more viewpoints, more stories, and I want to see that. I think also, as I continue on and get more clout, I’m committed to that as well. So I do understand the animus behind [the criticism], and I do want to see that happen for people. I think it’s important to just keep pushing for more and to get the doors to open wider.”

”To All the Boys I’ve Loved Before” is currently streaming on Netflix.

This Article is related to: Film, News and tagged Jenny Han, Netflix, To All The Boys I've Loved Before